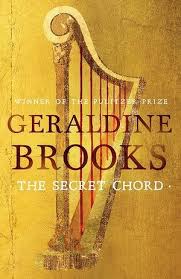 Normally I don’t read fact checks or other reviews before I write my own assessment of a new book. But this time, because my knowledge of the Old Testament comes from childhood Sunday School rather than any recent studies, I wanted to check the biblical and historical backgrounds of Geraldine Brooks’s novel, The Secret Chord. What I found was fascinating. King David, of course, lived a long and colorful life, one of triumph and tragedy intertwined. In both fact and fiction, his lifetime has been quite thoroughly explored. But apparently there is a missing link.  The prophet and seer Nathan is supposed to have written his own account of his friend, King David. So Gwendolyn Brooks has imagined, not that missing account itself, but the process by which Nathan was composing his version of David’s accomplishments and insufficiencies.

Reading other reviews of The Secret Chord, I found that the reviewers primarily have focused on David himself. They treat Brooks’ novel as one centered on the king. But I found myself much more intrigued by her narrative innovations, the methods by which she chooses to retell the familiar Old Testament stories. First of all, Nathan behaves asexually. This means that not only can he assess David’s voracious appetites from an objective point of view, but that Brooks herself can write from a neutral, if not neutered, stance. Her narrative, whether in the midst of battle, in the intricacies of court intrigue, or in the king’s boudoir, sounds plausible in a non-gendered way.

Second, by tracing the details of Nathan’s reconstruction of David’s life, she adds multiple voices. For example, Nathan was not present during David’s formative years, so he interviews the king’s mother, his brother, and other family retainers. Thus the reader gains a double access to David’s boyhood and to his infamous encounter with the gigantic Goliath. We listen to those who were there, and we hear what they say as filtered by Nathan’s “apparent” objectivity. Even later, when Nathan has been an active participant in well-known events, he continues to listen and talk with others, and he clearly exposes his own subjectivity, his own misconceptions and misinterpretations. As a result, The Secret Chord is a finely nuanced presentation, one that adds new dimensions to familiar biblical tales.

Finally, The Secret Chord is an earthy, at times bawdy, often graphic novel. The battles are bloody, the maneuvers relentlessly cruel. David can be heroic, but he can be equally ruthless and obtuse. Nathan adores him, but at times disdains the royal actions. Most importantly, Nathan foresees the future, when The Name comes to him in a voice or a vision. Brooks handles Nathan’s soothsaying moments with finesse, allowing him to share or withhold his predictions and never forcing his prophecies on the novel’s participants or sequence of events. In this respect, she stays true to the biblical accounts, even as she creates a believable while complicated imaginative narrative voice.

Brooks has a knack for taking an historic artifact, a missing manuscript, or a footnote, or an allusion somewhere, and expanding it into a fully-fledged tale. March, for which she won a Pulitzer Prize, imagines the Civil War experiences of the missing father in Louisa May Alcott’s Little Women; People of the Book recounts the retrieval of a long-lost Sarajevo manuscript, its present discovery and its past history. The Secret Chord is perhaps her most profound accomplishment to date, as she has taken stories familiar to many of us and turned them into an original recounting of myth, legend, and Judaic lore.   – Ann Ronald 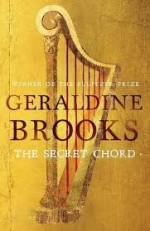 Ann Ronald is a retired English professor from the University of Nevada, Reno. Author of dozens of reviews, she’s also written a number of books about the American West. They include literary studies such as The New West of Edward Abby and Reader of the Purple Sage, cultural studies such as GhostWest and Oh, Give Me a Home, and nature writing such as Earthtones: A Nevada Album. Her latest is a work of fiction, Friendly Fallout 1953. Since retiring, she’s been reading vociferously, so “Bookin’ With Sunny” is giving her a wonderful opportunity to share thoughts about her favorite new discoveries.
More from this reviewer
PrevThe Hours Count
Blue Yodel – 2015 Yale Younger Poets PrizeNext