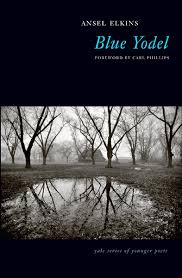 Each year, the Yale Younger Poets prize is awarded to an American under forty who has not previously published a book of poetry. In 2015, this honor goes to Blue Yodel, Ansel Elkins’ debut collection. Elkins achieves great depth in these poems as she navigates the challenges of being a woman from adolescence to motherhood and, for some, reclaiming identity after a failed marriage. Told against the backdrop of the South, some of Elkins’ poems delve into the ghosts of a turbulent time in United States history. This collection addresses gender and race from the perspective of the oppressed, yet in the most unlikely moments, readers will find that a little bit of humor goes a long way as we grapple with our flawed humanity.

Blue Yodel traces the fallible nature of humankind back to the story of Adam and Eve. More specifically, Elkins makes reference to this biblical example to draw out its implications for womankind. Eve is portrayed as the woman who initiates the fall from grace by consuming the forbidden fruit, and what follows is a longstanding history of the female being regarded as unworthy and even dangerous—someone to silence and subdue. Now, what would the first woman say if she were given a chance to tell her side of the story? In this collection, Elkins assigns power to women where, culturally, it has been stripped. In her poem “The Autobiography of Eve,” Elkins transforms the fall from paradise into a deliberate escape: “Let it be known I did not fall from grace /I leapt/to freedom.” Spoken in our modern times, these words resonate with the history of progress. Here, Eve becomes a symbol for women emerging from a patriarchal canon and reclaiming their voice.

In “Crying Wolf,” Elkins again re-assigns power to women. Often portrayed as the victim of unwanted advances, the female is stereotyped as helpless. Through a confident persona, Elkins challenges this stereotype by implying that the same lust and hunger inhabit the female psyche:

All this time I saw the wolf
in other men: cavern-eyed,
famished with winter, moon-white teeth
blood-streaked,
devouring the elk while its heart still beat.
I swore I could see
the wolf in other men.
But when at last I looked into the moon
what met my gas was the mirrored
wolf in me.

While this collection encourages its audience to reconsider the cultural expectations we assign on the basis of gender, Elkins doesn’t forget that humor is just as curative as empathy. Excerpted from “Real Housewives,” this passage showcases the poet’s ability to refresh the image of the divorcée with funny metaphors:

The best gossip begins like kindling
ignited and fanned to flame.
Rising out of the ashes
of a divorce, her life in foreclosure,
the housewife must reauthor herself:
she unzips the old skin and begins anew
under the knife of a celebrity surgeon
reputed to be shrewd.

Blue Yodel shows emotional range as the collection goes from one comical moment to a heart-wrenching one. Told from the perspective of a tornado victim, the next poem describes a scene where a daughter is pulled away from her mother. As in all of her poems, what makes Elkins’ verse so poignant is the concision of her language. Every word is carefully selected in these images, provoking empathy in the reader. In this excerpt from “Tornado,” Elkins narrates unspeakable loss that happens in a matter of seconds:

…one Mississippi, two
I tried to tether you
to me. Through sweeping winds
of glass and debris
I struggled to see.
one–
I watched my daughter fly away
from the grapnel of my arms. Unmoored,
like a skiff she sailed alone out the window.

In “Reverse: A Lynching,” Elkins’ poetic lens goes back in time to relive the horrors of racial segregation. As details of the victim’s life revert back to the way they used to be, we become aware of everything he loses in those moments. This, too, is a chilling reminder that what has been done cannot be taken back:

Return the man to his home
Unwidow his wife
Unbreak the window
Unkiss the crucifix of her necklace
Unsay Hide the children in the back, his last words

Blue Yodel resonates with tragedy, longing, and mercy. Elkins has a knack for telling stories with power and precision. In these sparse lines, we find our own flawed condition reflected back at us. This collection gives a nod to the origins of our fallibility, as much as it reminds us of its driving force in the present. – Joanne Mallari 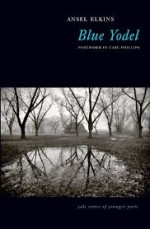 Joanne Mallari holds a BA in English (Writing) with a minor in Spanish from the University of Nevada, Reno. She currently teaches preschool at St. John’s Children’s Center. Her interests include poetry, shower recitals, and dancing at random. Joanne lives in Reno, NV.
More from this reviewer
PrevThe Secret Chord
The ExpatriatesNext