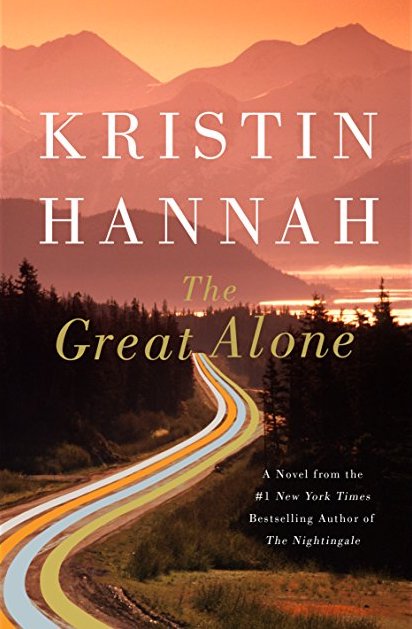 The Great Alone is the third Kristin Hannah novel I have reviewed for “Bookin’ with Sunny.” I am a great fan of Hannah’s writing, and I am rarely disappointed. For me, however, The Great Alone started slowly. Not only were the family dynamics awkward, but the characters didn’t seem to be people I wanted to know better. Then, boom!!! About a hundred pages into The Great Alone, Hannah hit her stride. From that moment until the final page, I was utterly engrossed by the Allbright family and their Alaskan trials.

Their story begins in 1974. A Viet Nam vet who endured capture for six long years, Ernt, the father, struggles to keep a job and to integrate himself back into society. Coraline, his wife, suffers alongside him, bowing to his volatile moodiness while refusing to acknowledge the physical and emotional effects of his explosive temper. Hannah views the subtleties of their relationship through the eyes of their thirteen-year-old daughter, Leni, who desperately tries to interpret and endure her parents’ instabilities.

When another Viet Nam POW who didn’t survive the war leaves property on the Kenai Peninsula to his buddy, Ernt, the Allbrights decide that the road to happiness leads to Alaska. The three pack themselves into an aging VW bus and head north. Ill-equipped for life in the bush, and especially ill-prepared for long dark Alaskan winters, the Allbrights set up housekeeping in an abandoned cabin. The first hundred pages of The Great Alone detail the difficulties of prepping for winter while setting up the family dynamics that will prove so critical to their well-being. As I said at the outset, I think Hannah takes too long to generate any heart-stopping or heart-wrenching action. Ernt is too violent; Cora, too compliant. I wanted to shake them. Leni wants to bring them to their senses, too, but helplessly in the thralls of adolescence, she can’t possibly change her parents’ behavior. So the Allbright story seemed at a stand-still.

Then darkness heightens Ernt’s anxieties and misbehaviors until a crisis moment finally kicks Hannah’s novel into high gear. From that moment throughout the rest of the action, this reader at least couldn’t stop turning the pages.

Hannah structures The Great Alone by focusing on three critical times. The first is 1974 when the Allbrights begin their northland adventure. Then follow two more two more crucial years in Leni’s life—1978 and 1986—particular weeks and months that allow Hannah to display Leni’s developing maturity. As a high school senior, Leni is better able to interpret her parents’ unbreakable bonds. Even though she condemns her mother’s weaknesses, she appreciates her mother’s love. Later, as a young adult with her own personal relationships, her maturity increases. This gives a fine-tuned perspective to Hannah’s very fine novel.

More than just the characters are alive in The Great Alone, however. The Alaskan landscape plays a key role, too. Hannah notes in her Acknowledgements that Alaska has been important to her own family and that she has spent a great deal of time there. That affinity for the Kenai Peninsula’s harsh beauty, its exacting grandeur, shines on every page. So I am very glad, indeed, that I didn’t stop reading after a hundred pages. The sprawling brawl of The Great Alone soon leaves the initial pedestrian skirmishes behind. The result is a heart-stopping tale of transactional behaviors.   – Ann Ronald 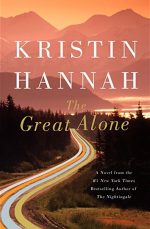 Ann Ronald is a retired English professor from the University of Nevada, Reno. Author of dozens of reviews, she’s also written a number of books about the American West. They include literary studies such as The New West of Edward Abby and Reader of the Purple Sage, cultural studies such as GhostWest and Oh, Give Me a Home, and nature writing such as Earthtones: A Nevada Album. Her latest is a work of fiction, Friendly Fallout 1953. Since retiring, she’s been reading vociferously, so “Bookin’ With Sunny” is giving her a wonderful opportunity to share thoughts about her favorite new discoveries.
More from this reviewer
PrevBlood Dazzler
Search for the New LandNext