Home » Reviews » Fiction » The Girl on the Train

The Girl on the Train

A novel of neuroses, The Girl on the Train will drive a sane reader mad. Paula Hawkins has created three psychologically damaged women to tell this tale of angst and mental pain. Incredibly, she pulls the pieces of their lives together in an absolutely riveting story. I didn’t much like these women, I wanted to shake them and change them and urge them to acknowledge their mistakes. I couldn’t stop following them, however, even though every page was excruciating to read.

Rachel, the girl on the train, is the lead narrator. A vicarious voyeur as she rides past dwellings housing other people’s lives, Rachel, (who lives primarily in her imagination) has no meaningful existence of her own. Even when recalling her own past, she is unable to confront reality. So Rachel is unreliable, an unreliable alcoholic to be specific. We cannot trust her perceptions, her interpretations, even her thoughts. Whether she is drunk or sober makes no difference, Rachel cannot be trusted. And yet . . . and yet . . . there is a grain of truth underlying her convoluted observations. Discovering the truth, sifting through the lies, the reader begins to discern an explanation for a series of events that builds to a crescendo as the novel races along the railway tracks.

Two other young women, Megan and Anna, narrate short segments of The Girl on the Train, too. Both live in houses observed by Rachel; both lead lives quite different from the existences idealized by our unreliable lead voice. At first, the reader believes their words are trustworthy, but before long we learn that their observations and opinions are as misleading as Rachel’s. They, too, are surprisingly unstable and their apparently happy lives are terribly flawed. In fact, Megan, Anna, and Rachel turn out to be mirror images of one another, a trio of doppelgangers whose behaviors echo and reverberate over and over again.

Yesterday I visited my local independent bookstore, and saw The Girl on the Train prominently displayed. Apparently it is currently a best-seller, ranked high on the NYT best-seller list. I certainly understand its popularity, for Hawkins has mastered the art of dramatic tension. This novel positively quivers with suspense. I found myself totally immersed in Rachel’s misguided persona, so much so that I discovered myself unraveling the novel’s truths in step with Rachel’s own detections. I generally am uncomfortable with neurotic narrators, but Hawkins’ Rachel is more compelling than most. Even as I wanted her to sober up, I also wanted her to solve the mystery at the heart of this very fine mystery.

What really happened alongside the tracks of this fast-moving train? No one who begins reading The Girl on the Train will put the book down until the answer becomes clear. When Rachel finally recovers an alcoholic blackout moment, the mystery is solved. But wait! There’s more! Getting to the novel’s climax is almost unbearable, but worth every page of pain. I strongly recommend what is a psychologically monstrous book, but one that simultaneously is absolutely fascinating.   – Ann Ronald

The Girl on the Train is Paula Hawkins’s debut novel. 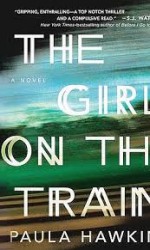 Ann Ronald is a retired English professor from the University of Nevada, Reno. Author of dozens of reviews, she’s also written a number of books about the American West. They include literary studies such as The New West of Edward Abby and Reader of the Purple Sage, cultural studies such as GhostWest and Oh, Give Me a Home, and nature writing such as Earthtones: A Nevada Album. Her latest is a work of fiction, Friendly Fallout 1953. Since retiring, she’s been reading vociferously, so “Bookin’ With Sunny” is giving her a wonderful opportunity to share thoughts about her favorite new discoveries.
More from this reviewer
PrevWhite Heat, Boy in the Snow, Bone Seeker
The Sisters BrothersNext