Home » Reviews » The Girl Before 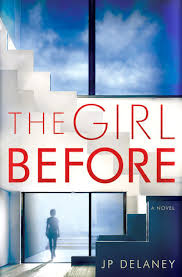 The first mystery to be solved: who is JP Delaney?  Before writing any book review, I generally check online to see what books the author has already published. The website for Penguin Random House tells me only that “JP Delaney is the pseudonym of an author who has previously written award-winning fiction under other names.” Nothing more!  I must admit that I’m intrigued!

The Girl Before is a first-rate psychological novel that probes the psyches of two young women who fall for the same man. Emma is “the girl before,” while Jane is Edward Monkford’s latest lover. In alternating chapters, “Then” and “Now,” these two narrators describe parallel lives and loves, as Monkford repeats his romantic seductions almost step by step. It turns out, too, that Emma and Jane are physically similar as well, and that they have mirroring histories. They even share the same grief and trauma counselor.

Monkford, a gifted architect with a controlling nature, has designed a state-of-the-art, high-tech home in London. He leases it only to carefully chosen tenants, single women who resemble his deceased wife and who themselves are suffering from some upsetting ordeal in their immediate pasts. Enter Emma, and then Jane, who must agree to Monkford’s fastidious rules. Nothing can be out of place in this house, and each inhabitant must allow the house’s technologies to control her very existence. When she steps in the shower, for example, the temperature is predetermined, as is the ambiance of light in every room.

As their individual stories progress, the reader learns that Emma died under mysterious circumstances. Puzzled by the contradictions in the accounts of Emma’s death, Jane is determined to unearth Emma’s secrets. The result is a rhetorical pas de deux, two narratives synchronized and intertwined, yet differing in a few crucial ways. Although both women find Monkford fascinating, Jane seems more grounded than Emma, more mature. The Girl Before is one of the novels, however, where the reader must decide who is honest and who is deceptive.

Delaney keeps the reader guessing until almost the last page and does so with the finesse of someone who has written many previous books.  The characters are well-delineated doppelgangers whose personalities seem fresh, not trite. Despite the repetitions, Delaney individualizes the two female protagonists. Their suitor, Monkford, could easily be a caricature of an obsessive man, but he, too, is a singular enigma. His house also has its own personality, one dictated by devious design. Delany controls the setting, just as Monkford controls his tenants.

If all this sounds too obvious, trust me, you will be puzzled by Monkford and Emma and Jane and by everyone else who plays a role. You’ll like the ending, I think, and you will be surprised. You will be wondering, as I still am, who actually wrote The Girl Before. Is JP Delaney male or female?  When I drafted this review, I found myself assuming that Delaney is a woman; later on-line probing suggests I’m mistaken. Who is JP Delaney?  Another mystery to be solved . . . . .   –  Ann Ronald

And the answer is: Delaney is male. See below as to what he has written under his other name.

Also available by JP Delaney writing as Tony Strong: Tell Me Lies; The Decoy; The Death Pit; The Poison Tree. 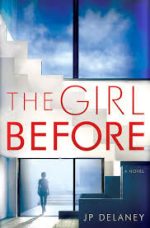 Ann Ronald is a retired English professor from the University of Nevada, Reno. Author of dozens of reviews, she’s also written a number of books about the American West. They include literary studies such as The New West of Edward Abby and Reader of the Purple Sage, cultural studies such as GhostWest and Oh, Give Me a Home, and nature writing such as Earthtones: A Nevada Album. Her latest is a work of fiction, Friendly Fallout 1953. Since retiring, she’s been reading vociferously, so “Bookin’ With Sunny” is giving her a wonderful opportunity to share thoughts about her favorite new discoveries.
More from this reviewer
PrevThe Fleet at Flood Tide
The Woman Next DoorNext