The Fleet at Flood Tide 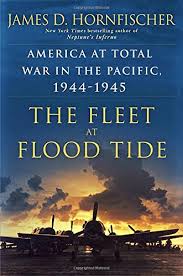 As a history, The Fleet at Flood Tide is both more and less than its title might suggest. The result is a book that may even appeal to those who normally might cringe at the thought of reading a military/naval history. The Fleet at Flood Tide is not just a military history, although there is plenty of that between the covers.  It’s a study in personalities. Also, James Hornfischer thoughtfully explores some of the larger issues of World War II, such as moral choices in using the atomic bomb, the refugee crisis following the war’s termination, and efforts to win the peace after brutally winning the war in the Pacific.

The general outlines of this story are well known but not beyond continuing contemporary dispute. 1944 was the crucial year of the war in the Pacific, a year when American manpower, training, technical excellence, production, tactical know-how, and logistics all came together. By mid-summer of 1944, it became clear: it was no longer a question of if but when the U.S. would prevail in the Pacific Theater. Concurrently, all the American participants knew that the Pacific, strategically, was second in importance to Europe. As the noose tightened around the Japanese in late 1944, and they reacted with suicidal effectiveness, the relative importance of the Pacific Theater meant nothing to those engaged in deadly pursuits.

Hornfischer writes in support of some of my biases, which may account for my fondness for this book. In particular, he takes the side of Admiral Raymond Spruance against both his contemporary and later detractors. He became a 4-star admiral, so it’s not that he was treated completely unfairly, but in the pantheon of World War II U.S. admirals, he is outshined by the likes of Admiral William “Bull” Halsey, who in late 1945 received the fifth star that should have, in my opinion, been awarded to Spruance. Hornfischer’s narrative and analysis of the rights and wrongs of Spruance v. Halsey in 1944 and 1945 provide one of the threads connecting the big events portrayed here. He does so in a balanced and convincing way.

Another of the personalities that Hornfischer enlists to great effect is that of Colonel Paul Tibbets, B-29 test pilot, commander of the Enola Gay, and destroyer of Hiroshima. It is a sympathetic portrait, one that he expands into a thoughtful discussion of the numerous, complicated decisions that resulted in the dropping of the two atomic bombs on Japan.

The last several chapters of The Fleet are both surprising and satisfying. In them, Hornfischer goes beyond the end of the war, beyond the role of the U.S. Navy, and beyond September 2, 1945, when General Douglas MacArthur stood on the quarter-deck of the battleship USS Missouri to accept and sign the Japanese surrender documents. General MacArthur, no friend of the U.S. Navy and a controversial character of the highest magnitude (he’s a 7 or 8 on the Richter Scale), was given the task of governing Japan at the end of the war by President Harry Truman. Hornfischer’s story of the fortuitous blending of MacArthur’s talents and Japan’s needs, starting with imminent starvation, was done with finesse and conviction.  (I found myself setting aside my general dislike of Douglas MacArthur’s ego and empty rhetoric. In any case, Hornfischer’s narrative went beyond winning the war to demonstrate how, in the case of Japan, the U.S. won the peace, too.  In our history, there have been few such outcomes.   –  Neal Ferguson

Also available by James D. Hornfischer: The Last Stand of the Tin Can Sailors; Ship of Ghosts; Neptune’s Inferno: The U. S. Navy at Guadalcanal. 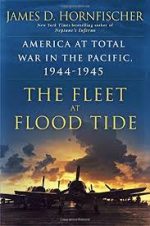 Neal Ferguson is a self described Anglo-phile. After studying for a PhD in British history and doing research for a year in various British archives, he came to the University of Nevada in 1970 to teach. Soon he found himself in administration where he remained until 2003. After returning to full-time teaching a decade ago, he decided to concentrate his teaching energies on Medieval British history and various global aspects of World War II. Dedicated to Ambrose Bierce’s proclamation that the purpose of war is to teach Americans geography, Neal insists that his students accompany him (in class) to sundry east European rivers and steppes, African deserts and jungles, south-east Asian mountain ranges and peninsulas, and small islands and coral reefs in the Pacific. Currently he is writing a book about the ups and downs of General Douglas MacArthur’s military reputation.
More from this reviewer
PrevHungry Heart, A memoir of consuming beauty
The Girl BeforeNext