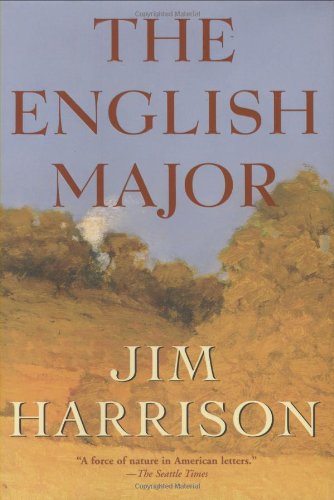 How can it be that I am as old as I am and have not read Jim Harrison’s fiction before this? All I can say is thank goodness I did pick up a copy of The English Major, his latest book, now out in trade paper. What a romp.

Harrison opens his novel with a loaded declarative sentence: “It used to be Cliff and Vivian and now it isn’t.” The story is told in Cliff’s voice, and it is a voice that is pitch-perfect. Here’s a guy, married almost thirty-eight years, whose wife leaves him for an old high school beau she reconnects with when she and Cliff attend their 40th high school reunion. Cliff is devastated and does not want the divorce, “I want Vivian back, but it’s been made clear to me that this is unlikely to happen.” Poor Cliff. Well, maybe.
A little background, if you please. Cliff, as the title tells us, was an English major, and after he and Vivian marry, they return to Mullet Lake, Michigan, where he teaches high school English at their alma mater. But he quits teaching after ten years, puts his English major personae on ice, and takes up running the small family farm owned by Vivian’s parents. Cliff is a natural at farming. He loves the fruit trees, the cattle, the pigs, his dog Lola and Vivian. The years pass, the farm flourishes, their son graduates from college and finds a career in San Francisco. Cliff pulls at our heartstrings when he says, “The last thing I expected was that my fifty-eight-year-old wife would become wayward.”
It is enough to know that Cliff loses it all, wife, farm, and even Lola. He decides to travel across the U.S., from Michigan to California, where he plans to visit his son, who lives in San Francisco. Along the way, Cliff stops to visit a favorite high school student he has kept in touch with for more than twenty years. She is no longer under-age, and Cliff is as ripe as the orchard fruit he no longer owns. Marybelle joins Cliff on his travels, intending to leave him in Montana, where her archeologist husband and son are working on a college dig. Cliff lives the out adage, “be careful of what you wish for.”
Harrison has written the perfect on-the-road book for those over fifty. His mile-by-mile sexual exploits are not just funny but also sweet, sad, and filled with enough insight to keep the pages flying. Just when you think it can’t go any further (and farther), Harrison lets Chris out of Marybelle’s clutches long enough to look at the scenery, appreciate the local flora and fauna, and with an aging innocense, comments, “Rivers make my favorite sound.”
We learn about State flowers, State birds, and enough of Cliff’s philosophy of renaming each that the whole thing begins to make sense. I won’t give away the ending, but Cliff reaches San Francisco after depositing Marybelle in Montana. His son fills him in on Vivian and her relationship that is foundering. We travel with Cliff back across the states as he heads to Michigan with Marybelle only a cell phone call away.
Vivian is a character also worthy of our sympathy and understanding. Long term relationships do not die easily. Early on in the story, Cliff, in a bar, listens to two ranchers swapping tales and thinks, “These fellows reminded me of the old days, my father’s generation when stories were told slowly and savored.” How lucky for us that Jim Harrison remembers that generation. The English Major, read slowly and savor.   –   Sunny Solomon
Addendum: I wrote this review back in 2010, and today I’ve made a couple of changes, like letting you know what other books he has written, including his poetry. Mostly, I want to make note of Jim Harrison’s death in 2016.
Also available by Jim Harrison: Legends of the Fall; Dalva/ A Good Day to Die; Farmer; The Road Home; Returning to Earth; The Raw and the Crooked; The Woman Lit by Fireflies; Brown Dog (Novellas); Julip; The River Swimmer; Dead Man’s Float; The Great Leader; A Really Big Lunch; The Beast God Forgot to Invent; Wolf- A False Memoir; The Ancient Minstrel; The Big Seven; In Search of Small Gods; The Theory and Practice of Rivers (Poems); The Summer He Didn’t Die; Just Before Dark (Collected Nonfiction); Off to the Side: A Memoir; Songs of Unreason; Braided Creek, A Conversation in Poetry; Warlock; Letters to Yesenin; Jim Harrison, The Essential Poems; Plain Song; The Boy Who Ran to the Woods; Saving Daylight; The Etiquette of Freedom (w/Gary Snyder); True North; Selected and New Poems; The Coca-Cola Art of Jim Harrison; The Passing – Perspectives of Rural America. 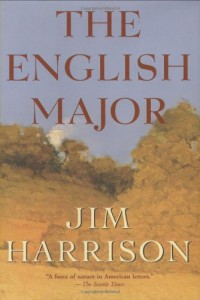 Sunny Solomon holds an MA in English/Creative Writing, San Francisco State University. She is a book reviewer for “The Clayton Pioneer” and her poetry and other writing has been published in literary journals, one chapbook, In the Company of Hope and the collection, Six Poets Sixty-six Poems. She was the happy manager of Bonanza Books, Clayton, CA and Clayton Books, Clayton, CA. She continues to moderate a thriving book club that survived the closure of the store from which it began. Sunny currently lives next to the Truckee in Reno, NV.
More from this reviewer
PrevThe Remains of Company D
The Immortal Life of Henrietta LacksNext