The Remains of Company D

“He went lights-out somewhere just beyond the Paris-Soissons Road, while the air rained bullets and his company – the survivors, anyway – rolled on through the German line, shooting and yelling and swearing and falling, and disappeared into the smoke and dust and fading evening light of a hot July day.”

That’s some opening and a helluva way to meet Pfc. John Nelson as he lay wounded on his first day out of the trenches. Nelson was also known as “The Old Man” to his grandson, author James Carl Nelson’s. Pfc. John Nelson would live to be 100 years old, but like many veterans of many wars he shared little of his wartime experience with members of his family. The Remains of Company D is a riveting narrative of those years and the years following the end of World War I. It is John Nelson’s story and the story of his comrades in the U.S. Army’s 28th Regiment, Company D.

To those of you who are fans of military history, the book will not disappoint. To those of you who, like myself, might be new to the genre, The Remains of Company D is a rich and compelling story. We all know how the war ends, but Nelson gives more than military tactical detail that holds the reader until the last page.

This is not only a story of battles fought and won or lost. This is a story of young men, very young men, who went from wheat fields, hardware stores, and paint shops of middle and small town America to the farmlands and bombed out villages of France. The author has found them through local news stories and personal letters. He gives us their names and the names of their parents, their sweethearts, wives and children, their siblings, their teachers and their friends. Readers follow the horror of life in the trenches without ever feeling very far from hometowns in Kansas, Minnesota, Illinois, and dozens of other states.

We care about these youngsters who answered the call, bolstered by parades, songs, and an intense patriotic fervor; care enough about them so that when their dead and dying bodies are left in the fields while their comrades move past them with bayonets ready, we feel a very personal loss. We remember which boy will not be returning to school and which mother will mourn most deeply.

Nelson’s grandfather and his comrades becomes our own flesh and blood as we see them enlist, complete their training and ship out. It is eerily realistic for the author to leave his grandfather’s body in the wheat field where he fell and would not be found and taken to a hospital until the next day. The killing stopped for no one and hundreds of comrades, rifles loaded, stepped past his body when he fell.

Carl Nelson’s powerful prose is an army itself: “And I wish you could have seen them. . . rolling out of the smoke and dust just to the west of Cantigny, stepping from their trenches toward a brilliant and yellow and rising sun, bayonets gleaming like flamethrowers. . .plodding on with grim determination. . . mad with war, with the glory of war and mortal combat. . .” And then: “I wish you could have seen them then because you wouldn’t have wanted to see them minutes later. . . the war turned ugly and nasty and desperate and profane. . .”

Nelson gives us a Great War not to be forgotten. If there are parallels between those years and today, the reader will have to find them for him or herself. This is not a political book even though war is always political. This is a personal book and war is always personal. 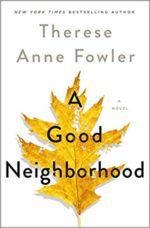 A GOOD NEIGHBORHOOD Therese Anne Fowler’s latest book, A Good Neighborhood, is one very good novel. The first thing that will catch your attention is

Sunny Solomon holds an MA in English/Creative Writing, San Francisco State University. She is a book reviewer for “The Clayton Pioneer” and her poetry and other writing has been published in literary journals, one chapbook, In the Company of Hope and the collection, Six Poets Sixty-six Poems. She was the happy manager of Bonanza Books, Clayton, CA and Clayton Books, Clayton, CA. She continues to moderate a thriving book club that survived the closure of the store from which it began. Sunny currently lives next to the Truckee in Reno, NV.
More from this reviewer
PrevThe Book of the Unknown, Tales of the Thirty-Six
The English MajorNext