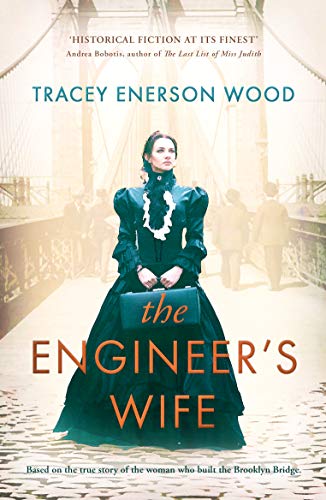 The Engineer’s Wife, a novel of the Brooklyn Bridge.

A 21st -century novel about a late 19th and early 20th-century brilliant wife.

I’m beginning to see a pattern. The last five years have seen a plethora of similar novels published, with smart heroines who have twenty-first-century attitudes about lifestyle possibilities for talented women but who actually lived in rather constrictive late nineteenth- and early twentieth-century milieux. Sometimes they are well-educated; sometimes not. Sometimes they have supportive husbands; sometimes not. Sometimes they happily succeed; sometimes not, with their frustrations tainting their lives. I’m not complaining about this plot design, not at all. There must be a considerable audience, in fact, for novels set historically but framed with modern readers in mind.

Tracey Enerson Wood’s fictionalization of the life of Emily Warren Roebling, The Engineer’s Wife, models the pattern well. Emily’s father-in-law, John Roebling, designed the architectural landmark Brooklyn Bridge that was completed in 1883. Her husband, Washington Roebling, was his father’s chief engineer. John died just as the construction was getting underway, so Wash was left to oversee most of the operation. But Wash soon was afflicted with caisson disease, the bends, decompression sickness caused by working deep underwater and then resurfacing too quickly. He became physically incapable of going to work every day.

Enter Emily, a young woman with her own dreams who subjugated them to those of her husband. The couple wed in 1865. When they met a year earlier, Wash had been a dashing Union captain, but by the time of their marriage he already was suffering from the effects of his wartime experiences. That “PTSD,” coupled with his caisson disease, made him a difficult spouse. Emily loved him dearly, though, and did her best to make their life together a success. From Cincinnati, where the Roeblings were erecting a bridge across the Ohio River, to Europe, where Wash studied more complicated architectural and construction design, then to New York City, and the long overdue undertaking, the infamous Brooklyn Bridge.

To amuse herself early on, Emily started perusing Wash’s books. She discovered a knack for mathematics and could soon understand multiple formulas and equations. She had planned, once they got to New York, to immerse herself in women’s suffrage activities, but she soon found herself immersed in bridge-building instead. At first, she was just the go-between, ferrying her husband’s engineering plans and day-by-day alterations from his bedside to the nearby Brooklyn Bridge construction site. Before long, she was lending her own suggestions to the project. And not long after that, she became the political face of the endeavor, articulating its importance to reluctant financiers and explaining its overall safety features to the public at large. As Wash’s role receded, Emily’s expanded.

This role reversal put even more stress on their marriage and on Wash’s mental as well as physical health. Here The Engineer’s Wife grows more complex as Emily interacts with other men, some of whom are attracted to her and some of whom loathe her. Tracey Enerson Wood successfully portrays the competing urgencies of Emily’s life, showing how the engineer’s wife must sometimes step forward and must otherwise step back. Emily’s role was a complicated one. That she managed to balance marriage, motherhood, her own aspirations, her husband’s career, and her husband’s incapacities was miraculous indeed.

A plaque, erected on the bridge and still in place today, is a testament to her achievement. Wood quotes Congressman Abram Hewitt’s words at the dedication ceremony: ‘The name of Mrs. Emily Warren Roebling will thus be inseparably associated with all that is admirable in human nature and with all that is wonderful in the constructive world of art.” Praise indeed, as Wood cements Emily’s legacy just as firmly in fiction, too.  –  Ann Ronald 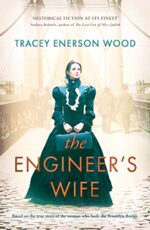 Ann Ronald is a retired English professor from the University of Nevada, Reno. Author of dozens of reviews, she’s also written a number of books about the American West. They include literary studies such as The New West of Edward Abby and Reader of the Purple Sage, cultural studies such as GhostWest and Oh, Give Me a Home, and nature writing such as Earthtones: A Nevada Album. Her latest is a work of fiction, Friendly Fallout 1953. Since retiring, she’s been reading vociferously, so “Bookin’ With Sunny” is giving her a wonderful opportunity to share thoughts about her favorite new discoveries.
More from this reviewer
PrevA Midsummer Night’s Dream
Paris Was OursNext