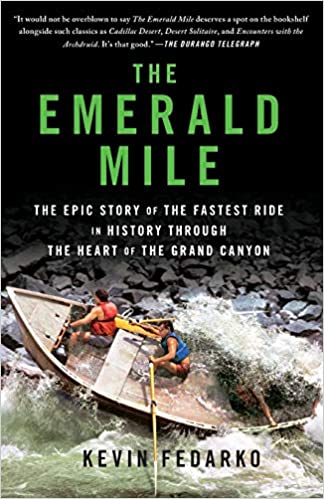 I wish I had read “A Conversation with Kevin Fedarko” before I read The Emerald Mile, rather than afterward, because it explains how and why he was able to write such pitch-perfect prose describing the Grand Canyon as seen by white-water enthusiasts. He spent six summers working for Grand Canyon Dories, so of course, he was able to picture in detail each stretch of water and its attendant dangers. Fedarko’s experience also intimately acquainted him with the guides’ personalities, their lingo, their urgency as they seek the perfect line through every cataract on the river.

The Emerald Mile captures that urgency as well as any book I’ve ever read about the Colorado River. Its narrative pivots around one remarkable ride through the canyon. In 1983, after a series of late spring snowstorms and then a precipitous thaw, the river was cascading at a pace not seen since before Glen Canyon Dam tempered its flow. The dam itself was close to overflowing, and engineers were working twenty-four/seven to keep it functional and safe. Below the dam, river-runners were seeing wild water like they had never seen before, as the water’s force sculpted new rapids and made the existing ones incredibly dangerous. Against all rules and regulations, indifferent about their own safety but enthralled by the speed and force of the water, three men launched a hand-built wooden dory at Lee’s Ferry. They hoped to set a new speed record for running the 277-mile-long gorge. Two of the three already held the record accomplished three years earlier, but they were convinced that the 1983 conditions would impel them even faster. They just couldn’t resist!

Fedarko breathlessly recounts the pace of that remarkable trip. The Emerald Mile, however, is much more than a book about an extraordinary feat of boatmanship. Fedarko fans his focus outwards. The chapters close to the record-setting ride recount other experiences on the river that week. They tell of the vacationers caught in the ever-shifting rapids and the other boatmen risking their lives in the rising water. They also detail what was happening at the dam, where engineering ingenuity was undergoing such severe tests. And, of course, they describe the Park Service, its rangers, and its helicopters struggling to rescue those caught by the dangerous whirlpools and eddies and bureaucratic waves.

Before it telescopes in on the late spring 1983 weather phenomena and the adventures it drove, The Emerald Mile had widened its lens to a broader scope. Earlier chapters recount earlier adventures when the first Spaniards saw the Grand Canyon, when John Wesley Powell first ran its length, when boatmen began designing a variety of watercraft to take thrill-seekers safely into the canyon depths. Fedarko is especially adroit at characterizing the larger-than-life personalities of the men involved, both then and now. This ability stems, I suspect, from his own observations of river rat machismo, just as his visual descriptions of the canyon walls and the river running deep inside come from what he saw when he was there.

A brief review can’t really do justice to a book like The Emerald Mile. Full of informative and often adventurous side-trips, it shows the canyon from countless angles and innumerable directions. Every page is packed, every sentence and every paragraph add to the immensity of the terrain. There’s so much going on, I could hardly put the book down. As I said at the outset, Fedarko’s prose makes the action pop with energy amid sandstone scenery described in vivid detail. His prose is thoughtful, too, as he contemplates diverse visions of the Colorado River. Reading The Emerald Mile will make the reader thoughtful as well. It’s one of those books you keep coming back to in your imagination. And, if you’ve ever been on the river, in your heart. – Ann Ronald

Also available by Kevin Fedarko: The Grand Canyon Between River and Rim. 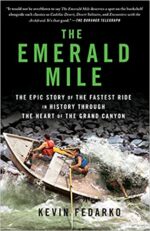 Ann Ronald is a retired English professor from the University of Nevada, Reno. Author of dozens of reviews, she’s also written a number of books about the American West. They include literary studies such as The New West of Edward Abby and Reader of the Purple Sage, cultural studies such as GhostWest and Oh, Give Me a Home, and nature writing such as Earthtones: A Nevada Album. Her latest is a work of fiction, Friendly Fallout 1953. Since retiring, she’s been reading vociferously, so “Bookin’ With Sunny” is giving her a wonderful opportunity to share thoughts about her favorite new discoveries.
More from this reviewer
PrevThe Postmistress of Paris
Fox & INext