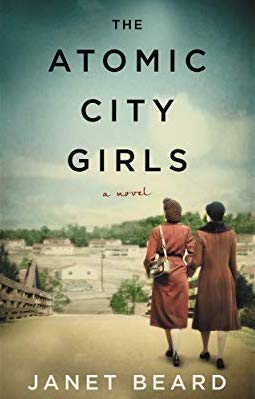 Because my reading and research interests have centered on Los Alamos and the Nevada Test Site, my knowledge of the Oak Ridge, Tennessee atomic facilities is scant. So I found Janet Beard’s novel, The Atomic City Girls, enlightening. While I did discover some new details about the experimental connections between Oak Ridge and Los Alamos, I learned a great deal more about the societal similarities and differences. Beard’s focus is twofold. One facet involves the personal lives of her characters, their aspirations and their goals. The other explores the emotional and psychological effects of so intensely building weaponry that could destroy the world.

The Atomic City Girls features two young women from rural Tennessee who find employment turning knobs and dials on mysterious machinery. No one explains what they are doing or why; the girls of Atomic City simply are expected to work error free and to ask no questions. June and Cici are roommates, one plain and one gorgeous. The beautiful Cici hides her rural upbringing while making no secret of the fact that she intends to find a rich husband. Shallow and self-centered, she tolerates June as a foil. June, on the other hand, is smart and curious. As the novel progresses, she changes from a naïve teenager into a far more savvy adult and functions as a conduit for Beard’s most interesting questions about the work at Oak Ridge.

Part of June’s maturation is due to her relationship with her boss, a physicist in charge of Y-12. Their love affair should not, but indeed does, give her access to classified information about the Oak Ridge project. Sam finds his work troubling. Each scientific success torments him, and the bombing of Hiroshima and Nagasaki nearly unhinges him. June is conflicted, too, although she doesn’t feel the personal responsibility that Sam carries in his head. Their interactions and their conversations with Sam’s peers give Beard room to convey the gist of scientific debate in the early 1940s.

Beard doesn’t add anything particularly new to the conversations, but her replications are accurate and provocative. Is it moral to build atomic bombs?

Even more provocative, I thought, were Beard’s workforce deviations from Los Alamos and Nevada personnel. Many of the Oak Ridge laborers were Black sharecroppers, hoping to send decent wages home to their families. Compared to the white workers’ pay, Black wages were significantly lower. Blacks were housed in substandard hutments, ate ill-prepared food in a segregated cafeteria, and had to endure ongoing insults wherever they went. Joe is determined to get along; Ralph objects. Their experiences and their subsequent actions add real breadth to The Atomic City Girls, as Beard raises racial issues I haven’t encountered in my studies of atomic facilities located farther west.

Gender issues play a role in this novel, too, although nothing unforeseen happens. Cici’s search for wealth takes her through a host of men, while June’s affair with Sam buffets back and forth between predictable highs and lows. Other women appear—the helpmate housewife, the rabble-rouser, Joe’s stoic spouse—but the key females are June and Cici. They add to the tone of The Atomic City Girls, too. The prose sounds curiously prosaic, as if Beard were replicating June’s rural Tennessee cadences (Cici had long since eliminated her own twang) while telling the story through June’s innocent eyes. The result, I think, is a kind of tonal flatness that detracts from the smart issues that Beard chooses to raise. Even so, I’m glad I read The Atomic City Girls. It has given me things to think about, and I think most readers will enjoy it.   – Ann Ronald

Also available by Janet Beard: Beneath the Pines. 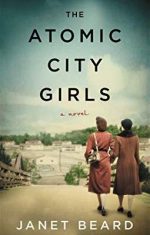 Ann Ronald is a retired English professor from the University of Nevada, Reno. Author of dozens of reviews, she’s also written a number of books about the American West. They include literary studies such as The New West of Edward Abby and Reader of the Purple Sage, cultural studies such as GhostWest and Oh, Give Me a Home, and nature writing such as Earthtones: A Nevada Album. Her latest is a work of fiction, Friendly Fallout 1953. Since retiring, she’s been reading vociferously, so “Bookin’ With Sunny” is giving her a wonderful opportunity to share thoughts about her favorite new discoveries.
More from this reviewer
PrevRiver of Lost Souls
Zora & Me, The Cursed GroundNext