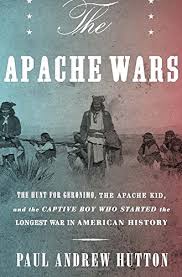 THE APACHE WARS: THE HUNT FOR GERONIMO, THE APACHE KID, AND THE CAPTIVE BOY WHO STARTED THE LONGEST WAR IN AMERICAN HISTORY.

Some Apaches believed that a redheaded eleven-year old boy was responsible for the twenty-six year-long Apache Wars. It was Mickey Free’s fate to be abducted by Pinal Apaches in 1861 and reared to be a warrior. According to Paul Hutton, the hunt for him by the U.S. Army set off a series of wars collectively known as the Apache Wars that more or less ended with the surrender of Geronimo in 1886.

Mickey was in the wrong place at the wrong time, but he was more than a mere victim in Hutton’s view of the Apache Wars. In his being, Mickey Free combined aspects of these wars. His adoptive father was Irish; his mother was Mexican; his most formative years were Apache. Through this one boy’s life the savage, sanguinary Apache wars were played out in triangular fashion pitting Americans, Mexicans, and Apaches against one another. Eventually, neither the Americans nor the Apaches trusted him although he continually moved freely among both cultures.

As a reader, I found myself caught up in the tragic inevitability of this epic story involving dozens of flawed characters, an inevitability that goes beyond my already knowing how the story ends. Hutton’s narrative is highly influenced by both American and Apache voices, less so by Mexican ones. In any case, there is some agreement among the storytellers: the Apaches were on the wrong side of history. None of them used so fancy a term as Manifest Destiny to describe the results of the Mexican-American War, the Gadsden Purchase, and the Apache Wars. They didn’t have to. Apache leaders recognized the encroaching tide of American settlers and miners for what it was: unstoppable. The chieftains and their various Apache nations, over the course of several generations, were gradually brought into the inescapable matrix constructed by the U.S. Army and the Indian Bureau. The Americans offered carrots and sticks although, interestingly, the U.S. Army was more often the provider of carrots than of sticks. (This is a complicated story.)

Most Americans have heard of Geronimo and may even recognize Cochise. Ditto Generals William Sherman and Phillip Sheridan. General George Crook, however, is perhaps less well-known, although his actions against both the Sioux and the Apaches make him one of the pivotal characters in American Indian Wars. It is one of the chief strengths of Hutton’s Apache Wars that he provides character studies of those traditionally considered to be central to the story and of those who, due to more recent historical writing, are now seen as more important than they formerly were. For example, Victorio, of the Warms Springs Apaches, led successive but ultimately futile efforts to return with his people to ancestral lands. The Indian Bureau sent a succession of agents to Arizona Territory, some of whom were, in turn, capable, inept, corrupted, or ethical. Tom Jeffords became an Indian agent only after trying to establish a stagecoach and pony express operation in Arizona Territory and, in the process, befriended Cochise, the Chiricahua Apache chief. Jeffords is not well-known generally, but might be familiar to Americans of a certain age who watched the TV program, “Broken Arrow” available in 72 episodes from 1956-1960.

From start to finish, Hutton’s The Apache Wars is compelling. At times, the story line wanders into the weeds a bit, but I have no reservations about recommending this book to those interested in these complicated chapters of our nation’s history. Hutton is sensitive to the story’s many facets. There were some good guys and bad guys, but most of these historical personages occupy a morally ambiguous realm in between. Hutton is careful to present them in shades of grey. – Neal Ferguson 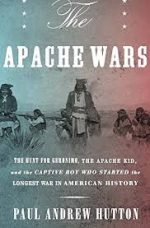 Neal Ferguson is a self described Anglo-phile. After studying for a PhD in British history and doing research for a year in various British archives, he came to the University of Nevada in 1970 to teach. Soon he found himself in administration where he remained until 2003. After returning to full-time teaching a decade ago, he decided to concentrate his teaching energies on Medieval British history and various global aspects of World War II. Dedicated to Ambrose Bierce’s proclamation that the purpose of war is to teach Americans geography, Neal insists that his students accompany him (in class) to sundry east European rivers and steppes, African deserts and jungles, south-east Asian mountain ranges and peninsulas, and small islands and coral reefs in the Pacific. Currently he is writing a book about the ups and downs of General Douglas MacArthur’s military reputation.
More from this reviewer
PrevTahoe Dark
The TravelersNext