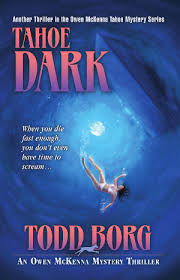 Todd Borg’s latest Lake Tahoe mystery thriller, Tahoe Dark, follows a pattern beloved by his avid readers. Something bad happens, Owen McKenna investigates, complications occur, subsequent evil ensues, and ultimately a tense confrontation explodes into chaos. All of Borg’s novels are dark, but Tahoe Dark is especially noir. So why do I love these narratives so very, very much?

Tahoe Dark begins with a kidnapping gone wrong, quickly followed by an inexplicable murder. Then, just a few hours later, robbers successfully hold up an armored truck and capture its casino-bound cash. Owen McKenna, who doesn’t believe in coincidences, wonders if two such unusual events in one day at a vacation resort might somehow be connected. He is correct, of course. And these events are but the prelude to more murders and further malevolencies.

Near the middle of the narrative, Owen contacts a San Francisco psychologist, George Morrell, for a consultation. What sort of villain might cause so many deaths and such intriguing misdirections? George thinks it must be someone whose personality displays a homicidal trinity. “The first trait is psychopathy, the second is Machiavellianism, and the third is narcissism,” George explains with chilling precision. Now I normally detest novels that dwell on such sick character traits. I usually refuse to read books about serial killers. But, as always, I eagerly turned Tahoe Dark’s pages. Why?

First, and most obviously, is the Tahoe scenery. Borg pictures a landscape I know well, and he does so with accuracy and with affection. Even when the events are dark, the scenery sparkles. For example, two Tahoe Dark murders occur not far from Valhalla, one of three restored estates on Lake Tahoe’s western shore. Borg’s Valhalla matches my own sense of the picturesque beauty, with “gentle” waves and “mesmerizing” breezes and the presence of stunning old buildings set among Ponderosa pines. Then Owen crosses Taylor Creek, the sun sets, the temperature drops, and corpses begin to appear. By depicting a familiar and peaceful scene, Borg can then smoothly do a literary one-eighty, turning both the landscape and the plot as murky as can be. Lulled by familiarity, I’m easily seduced into the chaos that follows

A second way that Borg subtly draws the reader into a nefarious world involves the people who populate his novels. The recurring protagonist, Owen McKenna, is a man of complications, an ex-cop who never carries a gun and eschews violence whenever possible, a lover of classical music and classical art who never backs down when confronted with a criminal act. His dog Spot, a Harlequin Great Dane affectionately called His Largeness, affords a canine personality to sooth tense scenes and sometimes to tackle anyone who might harm Owen. Street, Owen’s girlfriend, and Diamond, his best cop buddy, do the same—smooth over the tension, provide backup, and help solve the mysteries. On a personal level, I read these Tahoe thrillers to see how their relationships develop and mature.

Finally, there are the characters unique to Tahoe Dark. As in other Todd Borg thrillers, not everyone is a madman or a murderer. In this case, two sisters are caught in the web of Tahoe Dark intrigue, and one of those sisters has developmental disabilities. Their poignant scenes with Owen alternately heighten, briefly alleviate, and then intensify the stress that builds while he investigates the crimes. For this reader, at least, their presence humanely grounds the otherwise horrible deeds that occur. And so I continue to devour each Owen McKenna novel as soon as it appears. Lake Tahoe, avaricious Spot, and all the other human characters, make the Tahoe Dark dark triad mastermind bearable, make this latest Tahoe noir mystery as appealing as the preceding thirteen.   – Ann Ronald 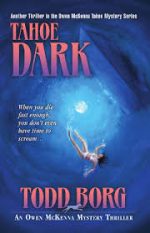 Ann Ronald is a retired English professor from the University of Nevada, Reno. Author of dozens of reviews, she’s also written a number of books about the American West. They include literary studies such as The New West of Edward Abby and Reader of the Purple Sage, cultural studies such as GhostWest and Oh, Give Me a Home, and nature writing such as Earthtones: A Nevada Album. Her latest is a work of fiction, Friendly Fallout 1953. Since retiring, she’s been reading vociferously, so “Bookin’ With Sunny” is giving her a wonderful opportunity to share thoughts about her favorite new discoveries.
More from this reviewer
PrevBehold the Dreamers
The Apache WarsNext