Home » Reviews » Sweet Promised Land and Robert Laxalt, the Story of a Storyteller

Sweet Promised Land and Robert Laxalt, the Story of a Storyteller 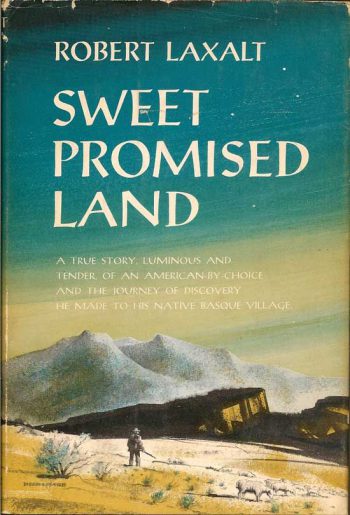 SWEET PROMISED LAND AND ROBERT LAXALT, THE STORY OF A STORYTELLER

Aside from Mark Twain’s Roughing It, Robert Laxalt’s, Sweet Promised Land (1957, 2007) is the most perceptively written depiction of Nevada before the Nevada Test Site, and Las Vegas defined the state differently. While Mark Twain wrote his memoir about frontier Nevada in its heyday, Laxalt’s memoir and biography of his father, Dominique, is about Nevada edging towards its final frontier days. While Twain’s comedic work depicts the mining bedlam of Virginia City, Laxalt’s moving elegy is of a gentle man and his gentle sheep. Dominque Laxalt, Basque immigrant and stoic sheepherder, found his biographer in his son, Robert. And Robert, journalist, novelist, editor, and teacher, found his in Warren Lerude. In Robert Laxalt, The Story of a Storyteller, Lerude, a Pulitzer Prize-winning journalist and former colleague of Laxalt’s, tells the unlikely story of Robert’s emergence from his father’s sheep camp and his mother’s Carson City hotel to become Nevada’s renowned 20th-century novelist.

Sweet Promised Land—the phrase was borrowed from Walter Clark’s City of Trembling Leaves who in turn borrowed it from the Old Testament. In Leaves the phrase is used half lovingly and half in jest. While creating Nevada, God has to rest on the seventh day before he gets around to making Nevada into a “land of milk honey.” Since God, for ineffable reasons, doesn’t return to his task, Nevada becomes a desert forever and part of a gigantic bowl, the Great Basin. In SPL, Dominique Laxalt contrasts his new home of Nevada to his bountiful, well grassed and watered French Basque Pyrenees homeland. But in the end, Nevada is the Sweet Promised land because of the opportunities it gives to Dominique, his wife, and his children.

The mountains and deserts of Nevada, arid and chronically demanding, make men out of boys, Americans out of Basque immigrants, and a surpassing family matriarch out of Robert’s mother. The promise of Nevada, difficult to extract, justifies the toil. It’s worth crystallizes for Dominque (and Robert) when Dominique returns to the Basque country and his original family forty-seven years after leaving. 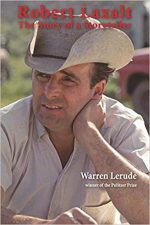 SPL launched Laxalt’s literary career with a flourish in 1957 at the age of thirty-four. Lerude’s laudatory biography shows persuasively how this young man cut his teeth as a journalist and slowly became confident enough of his abilities to move into long-form non-fiction in this memoir and then into fully-fledged fiction. Perhaps contrary to Lerude’s depiction, I am persuaded that SPL is as much a novel as it is non-fiction. While SPL is a memoir, it is also crafted to read like a novel and includes specifically novelistic devices—long dialogs and musings, all in quotation marks and purporting to be exact replications of what was spoken. While Robert Laxalt only puts quotes around conversations that he was directly a part of, it is clearly not possible for him to have transcribed the numerous and lengthy ones included in the book. Undoubtedly the framework of SPL respects the facts of his father’s life, but the guts of it are artistic and fictionalized. The final result is an example of beautiful craftsmanship, written in such gorgeous prose sufficient to make this immigrant to Nevada (me) fall in love with the state all over again.

In the most recent (2007) edition of SPL from UNR Press, Ann Ronald, herself a much-published author of the American West, praises the work and puts it into the genres of both memoir (a double memoir at that) and western American literature. Her “Foreword” is an insightful introduction to SPL.

According to Lerude, Robert Laxalt, desirous of writing a tribute to his father, rejected numerous beginnings as false starts. Finally, he disposed of all the notes and drafts he had written. He started anew with a simple, evocative sentence: “My father was a sheepherder, and his home was the hills.”

I am reviewing these two books together in honor of a new book club in town: the Battle Born Book Club. This all-male group has chosen Sweet Promised Land for its inaugural read.    – Neal Ferguson

Also available by Robert Laxalt: A Man in the Wheatfield; In a Hundred Graves, a Basque Portrait; Nevada; A Cup of Tea in Pamplona; The Basque Hotel; Child of the Holy Ghost; The Governor’s Mansion; Dust Devils; Time of the Rabies; Travels with My Royal; A Private War; A Lean Year and Other Stories; Basque Family Trilogy; The Violent Land: Tales the Old Timers Tell (with Richard Allen).

Also available by Warren Lerude: Above Tahoe and Reno (with Robert Cameron). 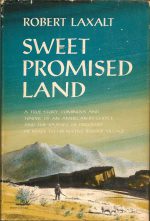 Neal Ferguson is a self described Anglo-phile. After studying for a PhD in British history and doing research for a year in various British archives, he came to the University of Nevada in 1970 to teach. Soon he found himself in administration where he remained until 2003. After returning to full-time teaching a decade ago, he decided to concentrate his teaching energies on Medieval British history and various global aspects of World War II. Dedicated to Ambrose Bierce’s proclamation that the purpose of war is to teach Americans geography, Neal insists that his students accompany him (in class) to sundry east European rivers and steppes, African deserts and jungles, south-east Asian mountain ranges and peninsulas, and small islands and coral reefs in the Pacific. Currently he is writing a book about the ups and downs of General Douglas MacArthur’s military reputation.
More from this reviewer
PrevThe Paris Diversion
Lilac GirlsNext