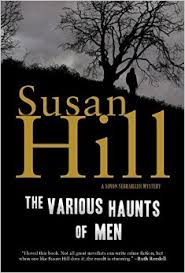 Susan Hill’s Simon Serrailler series features an introspective chief superintendent who polices Lafferton, a British cathedral town. Eight novels now follow Simon’s cases. The Various Haunts of Men, The Pure in Heart, and The Risk of Darkness are the first interconnected three. I use the word “interconnected” because each novel segues into the next. The missing persons case in The Pure in Heart, in fact, isn’t actually solved until the middle of The Risk of Darkness, and it continues to haunt Simon until the very end of that third book. So when a reader finishes one Simon Serrailler mystery, he or she immediately wants to open the next one! Only the fact that The Vows of Silence isn’t on my bookshelf kept me from reading number four before writing this review.

Each cover of a Susan Hill novel quotes someone who affirms that her way of looking at English denizens is reminiscent of Elizabeth George’s imagination. Like George, Hill has a visual eye that locks onto the British landscape, the aged buildings and the cottages, the dampness and the fog. She moves her characters both indoors and out, intimately texturing their experiences. And those characters are given complicated personalities, with intricate histories and troubled existences. Even the so-called normal men and women have problems, but the antagonists perform egregiously. Simon’s cases, at least in the first three novels, involve serial offenders who commit horrendous criminal acts.

That said, Hill’s novels are not for the faint-of-heart. Her plots and her perpetrators are psychological misfits whose evil misdeeds are almost unbearable. Make no mistake, Susan Hill does not write cozy mysteries! Even Elizabeth George’s disasters pale in comparison with Hill’s plot developments. Despite the unbelievable shocks, however, I was compelled to keep on reading. Not only is Hill’s prose style admirable, but her books lure the reader because she juggles corresponding narratives. Parallel events recur so that seemingly unrelated people and places echo one another. Problems with parenting, for example, reflect from one set of characters to another, from dealing with aging mothers to coping with unruly adolescents and recalcitrant children. The urge to disappear recurs, too, as multiple players muse about fleeing their lives, whether by suicide or by simply running away. Hill’s novels are a complex of reflecting and refracting tales, twisted together in a noose that hangs over every character’s head. Simon himself doesn’t escape Hill’s macabre imagination. Although he tries to compartmentalize his policing and his personal life, he sometimes conflates the two. When that happens, he chooses isolation from family and friends. That remoteness, however, is intriguing. A triplet, Simon’s interactions with his parents and with his siblings keep him sane. But that love is not enough to prevent confrontations with his relatives and an inability to connect intimately with anyone else. Will Simon find a woman to love? That’s another mysterious part of Susan Hill’s literary conundrums.

As a reader, I am partial to books in continuing series. I enjoy watching the repeating characters develop relationships and grow emotionally. Simon Serrailler’s depiction is no different. He is a fascinating man who not only solves complicated police cases with intelligent finesse but who also deserves a happier personal life than I’ve seen so far. So I look forward to following his future investigations into neurotic criminal madness and his own troubled psyche. – Ann Ronald

Also available by Susan Hill: The Woman in Black; The Various Haunts of Men; The Small Hand; The Betrayal of Trust; The Risk of Darkness; Strange Meeting; The Vows of Silence; I’m the King of the Castle; The Shadows in the Street; The Mist in the Mirror; A Question of Identity; The Man in the Picture; Mrs. de Winter; Howard’s End is on the Landing; A Year of Reading From Home; In the Springtime of the Year;The Bird of Night; A kind Man; Black Sheep; Dolly, A Ghost Story; Gentleman and Ladies; A Bit of Singing and Dancing; Air & Angels; Can It Be True?; The Boy Who Taught the Beekeeper to Read; The Magic Apple Tree; The Battle for Gullywith; The Small Hand & Dolly; The Magic Mirror, Concerning a Lonely Princess, a Foundling Girl, a Scheming King and a Pickpocket Squirrel; Beware Beware; Whistle in the Dark; Stuart at the Library (An I Can Read Book, with Lydia Halverson). 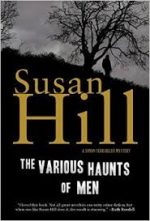 Ann Ronald is a retired English professor from the University of Nevada, Reno. Author of dozens of reviews, she’s also written a number of books about the American West. They include literary studies such as The New West of Edward Abby and Reader of the Purple Sage, cultural studies such as GhostWest and Oh, Give Me a Home, and nature writing such as Earthtones: A Nevada Album. Her latest is a work of fiction, Friendly Fallout 1953. Since retiring, she’s been reading vociferously, so “Bookin’ With Sunny” is giving her a wonderful opportunity to share thoughts about her favorite new discoveries.
More from this reviewer
PrevThe General vs. The President
The Unexpected Inheritance of Inspector ChopraNext