Home » Reviews » The General vs. The President

The General vs. The President 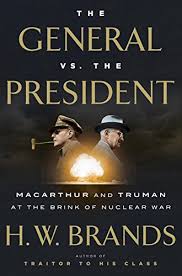 THE GENERAL vs. THE PRESIDENT: MACARTHUR AND TRUMAN AT THE BRINK OF NUCLEAR WAR

“I should have fired him [General MacArthur] six months sooner.” If Truman had done so, the history of both the Korean War and the last two years of Truman’s presidency might well have been different. But he didn’t, and no amount of wishing could change the fact that he procrastinated.

For those not familiar with this intriguing story, Brands lays out the narrative with clarity and verve. With brilliant finesse, General Douglas MacArthur, commander of United Nations forces in Korea, resisted President Truman and his administration’s policies regarding the conduct of the war. He never crossed the lines laid down by the administration. He never was insubordinate if one defines insubordination as defying a direct, written order. But he pushed the line with his toe. And he did step on the line when he engaged in his own foreign policy in defiance of a clear policy that military officers should leave such pronouncements to their civilian masters.

The story is not a simple one. Nothing connected to the long, illustrious career of Douglas MacArthur was ever simple or clear. No one doubted his courage, knowledge, intellect or personal charm. But he conducted his entire military career in the shadow of politics, from the time as a young lieutenant when he served as an aide to his Three Star General father, to fifty years later in 1951 when President Truman fired him because of his political intrigues. During the last decade of his fifty-year Army career, he qualified as one of the most famous Americans never elected President although not for lack of desire on his part. He explored a possible Republican Party candidacy for POTUS in 1944, ‘48, and ’52.

The Korean War is largely a forgotten conflict (whether technically a war or not is immaterial) falling as it does between America’s overwhelming victory in World War II and its overwhelming defeat in Viet Nam. It was the first occasion when we as a nation had to learn how to fight a limited but intense war despite our having access to hundreds of atomic bombs. It was also a time when President Truman, Secretary of State Dean Acheson, Secretary of Defense George Marshall and many others sculpted policies aimed at containing the Soviet threat and keeping the Cold War cold.

Brands, an award-winning biographer and historian, gives each of the major characters—Harry Truman and Douglas MacArthur—ample space and opportunity to relate their perspectives on the story. He quotes extensively from their memoirs and once-classified documents. In most historical works, I’d find the extensive quotations to be distracting and indicative of a dawdling pace. For reasons I’m not entirely clear about, his method succeeds in this book. In part, each protagonist has a distinctive voice. MacArthur’s is stentorian, polysyllabic, and at times melodramatic. Still, at his best, MacArthur could paint dramatic moments in high contrast both with his brains and his emotions. By contrast, Truman’s voice is spare, concise, and direct. Rarely is he obscure, although he sometimes sounds tougher in his memoirs than he did in real time. The same can’t be said of MacArthur. One needs a fact checker when reading his memoir, Reminiscences. I would have liked Brands to be more critical of MacArthur’s creative memoir, but he does let the reader know that the General’s recollections were sometimes askew. At the same time, Brands skewers Major General Courtney Whitney, MacArthur’s forever personal secretary and apologist.

The General vs. the President reminds us that the U.S. Constitution makes civilians supreme over our generals. FDR once described MacArthur as the most dangerous man in American. Not even the vain, arrogant Douglas MacArthur, however, denied that his president, his Commander in Chief, could hire and fire him at will. – Neal Ferguson

Also available by H. W. Brands: The First American, The Life and Times of Benjamin Franklin; The Age of Gold; Traitor to His Class; American Colossus; The Man Who Saved the Union; Andrew Jackson; American Stories, A History of the United States; T.R., The Last Romantic; The Money Men; Lone Star Nation; American Dreams, America Since 1945; The Reckless Decade; Master of Enterprise; The Strange Death of American Liberalism; The Murder of Jim Fisk; The Devil We Knew; What America Owes the World; The Wages of Globalism; Bound to Empire; Woodrow Wilson; Greenback Planet; Cold Warriors; Inside the Cold War; Into The Labyrinth; America, Past and Present; The Heartbreak of Aaron Burr. 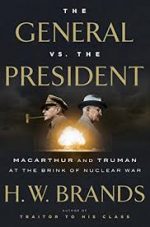 Neal Ferguson is a self described Anglo-phile. After studying for a PhD in British history and doing research for a year in various British archives, he came to the University of Nevada in 1970 to teach. Soon he found himself in administration where he remained until 2003. After returning to full-time teaching a decade ago, he decided to concentrate his teaching energies on Medieval British history and various global aspects of World War II. Dedicated to Ambrose Bierce’s proclamation that the purpose of war is to teach Americans geography, Neal insists that his students accompany him (in class) to sundry east European rivers and steppes, African deserts and jungles, south-east Asian mountain ranges and peninsulas, and small islands and coral reefs in the Pacific. Currently he is writing a book about the ups and downs of General Douglas MacArthur’s military reputation.
More from this reviewer
PrevHeadlong
Susan Hill x ThreeNext