Home » Reviews » A Streetcar Named Desire – An adventure in reading

A Streetcar Named Desire – An adventure in reading 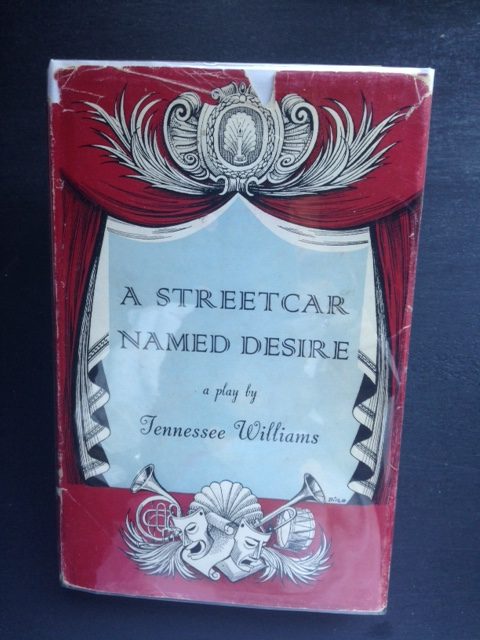 The other day I was at my bookshelves looking for a particular William Carlos Williams book of poetry when I spotted an early English edition (dust jacket and all) of Tennessee Williams’ masterpiece, A Streetcar Named Desire. I’d almost forgotten it was there and pulled it off the shelf. It’s a small volume fitting comfortably in my hands and fairly screaming, “Read me!” I admit it, my books speak to me. And what the heck, the workday was almost over, my PC was already on sleep, and I had just brewed my last cup of black tea. So, with book and cup in hand, I headed for my wingback reading chair.

By the time Blanche Dubois had arrived at her sister Stella’s apartment, I was having so much fun that I silenced my phone and knew dinner could wait. Of course, I’m almost certain I had read the play in a college English class. Ditto for having a vague memory of attending a student production, but what can never be forgotten is the movie version, even though it was seen on TV, commercials and all. Does anyone not remember Marlon Brando shouting, STELLA!

I found that reading Streetcar simply as something to read became something else, entirely. I was Stella. And yes, Blanche, too. I was every single character! The whole story was in my head. Plays have no paragraphs describing scenery or backstory, it’s in the dialogue or monologue, it’s immediate.  A Streetcar Named Desire takes more time on the stage than it does between book covers. There are no breaks for scene or costume changes, no intermissions. When I finished, I grabbed my laptop to see what others have said about reading plays. Most of the information found was for students, theatergoers, or teachers. There were some exceptions. Jessica Pryde wrote in The Case for Reading Plays: “Plays are, in short, a challenge to the inner eye and make you do a lot of work for the very short amount of time you are engaging them.” She’s right, but trust me, it is fun work.

The morning after reading the play caused me some stress as I thought about what I wanted to say. Did I honestly think people were interested in my take on Streetcar? We at Bookin’ with Sunny are dedicated to the pleasure of reading and we’ve recommended adult and kids’ fiction, picture books, history, science, poetry, biography, and memoir, but we’ve never recommended drama, as a book. Maybe reading drama is more adventure before pleasure.

Reading a play that you have already seen, either as film or on stage, almost doubles the pleasure of the story. You can change the sets, read out loud, and have fun with accents, take the time to stop and think about what was just said (read), no scene will get ahead of you. However, if it’s a play you have never seen or even read reviews of, the surprise is that your reading of the play is fresh and creative in a way that familiarity with the work does not allow.

But back to my 1949 John Lehman Second Impression copy of Streetcar. What a gas to look at the cast members of its first London production at the Aldwych Theatre, on October 12, 1949. Blanche was played by Vivian Leigh; Stella by Renee Asherson, a London actress who died in 2014 at age ninety-nine; Stanley was played by American actor Bonar Colleano (easily the model for Brando); Mitch was played by Canadian actor Bernard Braden; and Pablo Gonzales (one of the card players) was played by a very young Theodore Bikel. The play was directed by Laurence Olivier who was married to Vivian Leigh at the time. The Aldwych Theatre opened in 1905 and continues to thrive. I checked, and all the published plays I have on my shelves contain the same fun information: cast, director, date, and theater where the play opened. Reading a play is an adventure!

I know very few people who have copies of published plays on their bookshelves or even in their e-reader devices. So where do you find these plays (not scripts)? Most of mine are from used bookstores and you might get lucky and find some at your local library. Which books are now on my “Plays to Read” list?  TopDog/Underdog (2002 Pulitzer Prize) by Suzan-Lori Parks; Seven Guitars by August Wilson; A Man for All Seasons by Robert Bolt; Lost in Yonkers by Neil Simon; Blues for Mr. Charlie by James Baldwin; Val Paraiso by Don DeLillo; Drinks Before Dinner by Doctorow; The Cocktail Party by T. S. Eliot.

A Streetcar Named Desire is still in print and readily available. You might be surprised to find that your favorite fiction writer or poet has also written for the stage. Used bookstores are an invaluable source for older copies of plays, especially for obscure or long-forgotten works. I invite you to have an adventure, read a play, read A Streetcar Named Desire.    –  Sunny Solomon 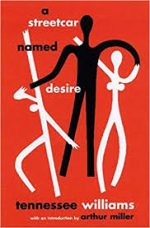 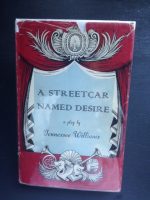 Sunny Solomon holds an MA in English/Creative Writing, San Francisco State University. She is a book reviewer for “The Clayton Pioneer” and her poetry and other writing has been published in literary journals, one chapbook, In the Company of Hope and the collection, Six Poets Sixty-six Poems. She was the happy manager of Bonanza Books, Clayton, CA and Clayton Books, Clayton, CA. She continues to moderate a thriving book club that survived the closure of the store from which it began. Sunny currently lives next to the Truckee in Reno, NV.
More from this reviewer
PrevThe Orphan Master’s Son – Back for a Second Look
Hidden FiguresNext