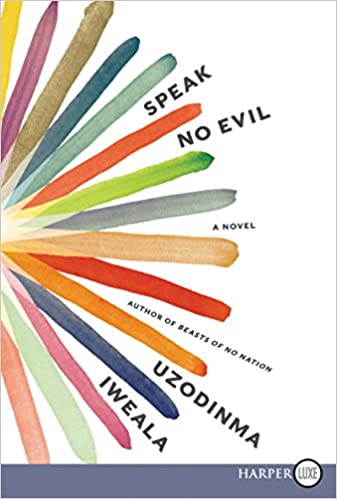 Uzodinma Iweala’s Speak No Evil left me not only speechless but breathless, too. It’s not often I encounter such a novel. Speak No Evil features two privileged teenagers. Seniors at a private high school in Washington, D.C., boasting good grades and running as individual stars on the boys’ and girls’ track teams, the two best friends are coming of age at a time of impending crises in their lives. Speak No Evil centers on their struggles to grow into adulthood and to find their places in the world.

Niru, whose Nigerian father is a corporate CEO and whose Nigerian mother is a physician, has already been accepted at Harvard. His future seems secure. He will graduate from Harvard, then from medical school, and will be successful throughout his life. But Niru is haunted by a secret, the fact that he senses he is gay. In his conservative upbringing and sheltered home environment, homosexuality is strictly taboo. So Niru is tormented by his increasing desires and his unrequited dreams.

Fortunately, he has a best friend, Meredith, whose father is an attorney in the Justice Department and whose mother is a successful socialite who knows all the right people. Meredith loves Niru, hoping at first that he might return her heterosexual affections. Speak No Evil begins as a snowstorm traps the unchaperoned two teenagers in Meredith’s house. She puts the moves on Niru; he cannot respond. Although she is somewhat embarrassed by her naivete, Meredith instantly sympathizes with Niru’s plight, now serving as a sounding board for his angst, his conflicting feelings, and his Nigerian guilt.

I mention their parents because they, too, play key roles in Speak No Evil. They’re quite different, yet quite the same. Different in that Niru’s father and mother hover over their son while Meredith’s are more stand-offish and uninvolved in their daughter’s life. Similar in that both couples expect their children to over-achieve, to exceed all expectations, and to fit neatly into the patterns of their peers. Both couples want bragging rights about their offsprings’ successes. Neither couple wants their child to deviate from the norm.

Speak No Evil gets complicated when Niru’s father finds gay dating apps on his son’s cell phone, apps that Meredith installed! Much of the novel focuses on Niru’s plight, as his father hauls him off to Nigeria for a cleansing and then insists he meet regularly with their local pastor for counseling. Meanwhile, Niru is drawn to a young stud who sells him new running shoes and who self-assuredly encourages Niru to be himself, not his father’s imagined self. Niru’s feelings for Damien, along with his burgeoning guilt, are depicted in stunning prose.

The running angle is important in Speak No Evil.  Both Niru and Meredith clear their heads while running and come to crucial decisions about their lives while running. They are more clairvoyant while running, breaking free from social restraints instead of only doing what their families expect. Running also dictates the pace of Speak No Evil. Uzodinma Iweala’s prose is breathless, nouns and verbs slapping the pavement as his characters run from Georgetown down to the Potomac, past the Washington, D.C., monuments and into more distant suburbs. That pace is what makes this novel breathless; the tension between life’s expectations and its realities is what renders a Speak No Evil reader absolutely speechless. I don’t know when I’ve read a better novel about what it might be like to be a young gay black man today, free to feel but unable to break free from familial expectations. And what it means to be his friend.  –  Ann Ronald

Also available by Uzodinma Iweala: Our Kind of People, A Continent’s Challenge, A Country’s Hope; Beasts of No Nation 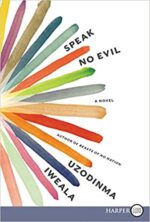 Ann Ronald is a retired English professor from the University of Nevada, Reno. Author of dozens of reviews, she’s also written a number of books about the American West. They include literary studies such as The New West of Edward Abby and Reader of the Purple Sage, cultural studies such as GhostWest and Oh, Give Me a Home, and nature writing such as Earthtones: A Nevada Album. Her latest is a work of fiction, Friendly Fallout 1953. Since retiring, she’s been reading vociferously, so “Bookin’ With Sunny” is giving her a wonderful opportunity to share thoughts about her favorite new discoveries.
More from this reviewer
PrevHollow Kingdom
In DependenceNext