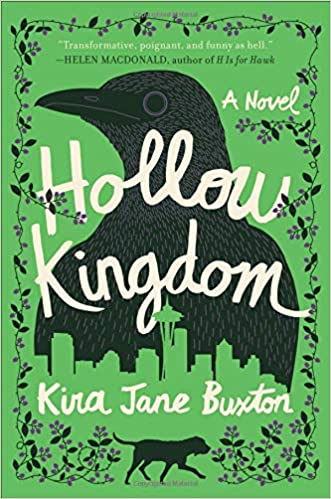 Are you a nature lover? A hiker? A botanist? A stargazer? A bird watcher? If so, please consider Kira Jane Buxton’s debut book, Hollow Kingdom. It is called a novel, but I still adhere to Mary McCarthy’s caveat from The Fact in Fiction, “In fables and fairy tales, as everyone knows, birds and beasts talk. In novels, they don’t; if you find birds and beasts talking in a book you are reading you can be sure it is not a novel.”

Those introductory words to my review of Hollow Kingdom were written in November 2019 and published in the Concord Clayton Pioneer in December 2019. Now, two months into the Covid19 stay at home orders, I would scrap the above paragraph and simply recommend, before reading Kira Jane Buxton’s Hollow Kingdom, go online and Google T. S. Eliot’s poem The Hollow Men.

Without giving too much away, Hollow Kingdom is the story, or fable, of a crow named ST, and the world in which he finds himself, a world changing in the most dangerous and macabre dimensions. ST was taken in as a fledgling by Big Jim, a beer-swilling, Cheeto-loving guy who lives in a Craftsman home in a Seattle neighborhood. ST lives with Big Jim and a lop-eared bloodhound named Dennis. ST loves Big Jim and considers himself more human than crow. ST’s identity problem permeates this fable, and he has as much to learn from a murder of crows and other animals, as we, the readers do.

One day an already eccentric Big Jim begins to exhibit the most bizarre behavior after one of his eyeballs falls from his head.

ST retrieves the eyeball and stores it in the cookie jar, but not before Big Jim begins to drool and retreats to the basement where he begins to poke his fingers into the wall. In ST’s words, “Big Jim was never the same again. None of us were.” Hollow Kingdom told in the voice of ST, begins: “. . . I’m here to be utterly honest and tell you what happened to your kind. The thing none of us saw coming.”

One of ST’s first flights from his Craftsman home after Big Jim retreats to the basement is to go to Walmart in the hope of stealing some medicines that he believes might help Big Jim. The streets are without traffic, and when he reaches Walmart, the employees are slobbering, with bobbing heads and poking their fingers and heads into anything that resembles a glass-like screen. They mumble, they are almost unrecognizable.

Shape without colour,
Paralysed force, gesture without motion;
I – The Hollow Men

ST, curiously human-like in his thinking, becomes increasingly more crow as the story unfolds. It is an apocalyptic tale filled with zombie-like humans in the process of losing their humanness due to a mysterious virus. Yes, dear reader, it is a virus, and I can say it now, it is a pandemic. Among other hideous things, humans begin to eat their heretofore beloved pets. It is when ST sees that happening that he flies home to save Dennis the lop-eared bloodhound. Kira Jane Buxton is a master at describing the visual effects of whatever is happening. In ST and Dennis, she has created memorable, wisecracking, profanely observant, heroic, and loving characters.

Dennis and ST become involved with a murder of crows living on the campus of the nearby university. As the presence of MoFos (Big Jim’s word for humans) continues to diminish, ST must perish or become a part of the animal world he has managed, until then, to arrogantly hold at arm’s length. Cities now almost empty of humans become inhabited by wildlife returning to lands once their own. The tale continues as ST and Dennis learn from other animals, not just the domesticated species, but dangerous predators as well.

Some of what ST must learn is: “For every species, there is a calling to evolve, an opportunity for change to ensure survival.” ST learns to become the crow he is, but without losing his hope for the MoFos he still loves. Or could it be as T. S. Eliot wrote:

Kira Jane Buxton has written a wildly imaginative story before the words Covid19 Pandemic became part of a global vocabulary. What can be learned from Hollow Kingdom will probably be something a little different for each reader. I’m not a huge fan of apocalyptic tales, but this one is a keeper. Filled with laughter, tears, despair, and hope, it is just the book to be read aloud to the whole family (with some words skipped over for younger ears) during these trying times.   –Sunny Solomon 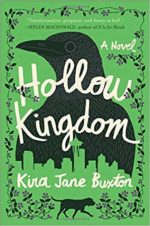 Sunny Solomon holds an MA in English/Creative Writing, San Francisco State University. She is a book reviewer for “The Clayton Pioneer” and her poetry and other writing has been published in literary journals, one chapbook, In the Company of Hope and the collection, Six Poets Sixty-six Poems. She was the happy manager of Bonanza Books, Clayton, CA and Clayton Books, Clayton, CA. She continues to moderate a thriving book club that survived the closure of the store from which it began. Sunny currently lives next to the Truckee in Reno, NV.
More from this reviewer
PrevBlackout
Speak No EvilNext