A few years ago I reviewed The Boy in the Suitcase for “Bookin’ with Sunny,” and made what I called a “glittering generality” about Nordic Noir mysteries. I wrote that “I find contemporary Scandinavian murder mysteries to be graphic, violent, unsettling, and almost off-putting. I try not to read them. But when I pick one up, I turn the pages almost non-stop until the end.” Let me repeat that caveat as I review James Thompson’s Snow Angels. It is far too graphic, far too violent, and far too unsettling. But I’m recommending it to anyone looking for an inventive mystery (and anyone who can stand the pain).

Thompson, an American married to a Finnish wife, has lived in Finland for many years. Snow Angels is his first novel featuring Inspector Vaara, a Finnish policeman married to an American wife. Thompson highlights that dual perspective throughout his fiction, keying on the cold and stark Finnish landscape, the seasonal excesses, the ways Finns react to the stress, and the ways outsiders misinterpret. Vaara’s wife, for example, calls Finland “an ugly place. The silence, the misery, the months of darkness. It’s too extreme, like living in a desert made of snow instead of sand.” She loves her husband dearly, but she hates both his job and the harsh land that surrounds them. She especially hates the darkness. Snow Angels takes place during kaamos, two weeks before Christmas when the sun never rises at all, and its plot is just as bleak and black.

Several deaths occur, beginning with the gruesome murder of a gorgeous Somali film star vacationing nearby. When Vaara delves into her life style, he unearths more than one motive and more than one potential predator. The words carved on the woman’s corpse suggest racism and sexism, or quite probably a combination of the two. As the plot develops, some of Vaara’s past resurfaces. Not only does the reappearance of his ex-wife complicate matters, but the apparent involvement of another policeman makes solving the crime even more difficult. More bodies; more gruesome details.

Because Thomas stresses Finnish stoicism throughout, he shows Vaara struggling to distance himself from the crimes and their human toll. This helps the reader, I think, distance him or herself from the horrific details of each dark demise. I found myself reading clinically rather than emotionally, solving a puzzle rather than allowing myself to have any feelings about the characters and their plights. I did relate to Vaara and his wife, however. Thompson convey their relationship with a keen sensitivity, an affectionate but tension-filled partnering that will undoubtedly develop through future Vaara novels.

Right now, there are three more Nordic Noirs featuring Thompson’s Finnish detective—Lucifer’s Tears, Helsinki White, and Helsinki Blood. These three take place in an urban setting, while Snow Angels is set in Finnish Lapland, inside the Arctic Circle. Certainly this first Vaara novel points toward a successful series, one not only Nordic Noir in nature but also one that gives readers cultural insights into a country and its ethnocentric population. – Ann Ronald 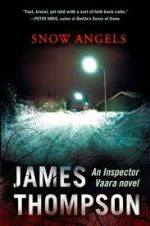 Ann Ronald is a retired English professor from the University of Nevada, Reno. Author of dozens of reviews, she’s also written a number of books about the American West. They include literary studies such as The New West of Edward Abby and Reader of the Purple Sage, cultural studies such as GhostWest and Oh, Give Me a Home, and nature writing such as Earthtones: A Nevada Album. Her latest is a work of fiction, Friendly Fallout 1953. Since retiring, she’s been reading vociferously, so “Bookin’ With Sunny” is giving her a wonderful opportunity to share thoughts about her favorite new discoveries.
More from this reviewer
PrevBryant & May and the Burning Man
The Invention of NatureNext