Home » Reviews » Bryant & May and the Burning Man

Bryant & May and the Burning Man

Bryant & May and the Burning Man – A Peculiar Crimes Unit Mystery

Whenever I read a Bryant and May mystery—there must be about a dozen of them by now—I’m always struck by Christopher Fowler’s whimsy, the fun he has riffing off of other British novelists and the delight he takes in placing his characters in odd situations and strange conversations. Bryant & May and the Burning Man opens with a paraphrase of the famous first paragraph of Charles Dickens’ Bleak House.

London. The protracted summer lately over, and the bankers sitting in Threadneedle Street, returned from their villas in Provence and Tuscany. Relentless October weather. As much water in the streets as if the tide had newly swelled from the Thames, and it would not be wonderful to find a whale beached beneath Holborn viaduct, the traffic parting around it like an ocean current. Umbrellas up in the soft grey drizzle, and insurrection in the air.

A reader familiar with the fog of Bleak House, and that novel’s labyrinthine depiction of London and its courts of law, will sense immediately the drift of Fowler’s Burning Man. Another labyrinth, this time a maze comprised of the banking system, with hedge fund machinations obfuscated by drizzle and rain and human malfeasance. Like Dickens’ London, Fowler’s is also hard to navigate. The rabble is revolting. Rioters dressed in Halloween costumes and Guy Fawkes masks clog the modern-day streets, demanding justice, legal sanctions and lawful punishment of guilty bankers for their blatant misdeeds.

Using this insurgency as a cover, someone is setting fires. Every day for a week, a death occurs. Each body is burned in some ghastly way, as if the perpetrator were following a checklist of medieval tortures. Tar and feathering; branding; burning at the stake. The London police ask Arthur Bryant and John May to help solve the puzzle, and so the Peculiar Crimes Unit gets involved. A holdover from World War II, the PCU investigates crimes that are oddities, ones outside the normal sorts of murder and mayhem, ones that need imagination to solve. But the PCU itself is peculiar. Its two key cohorts, Bryant and May, elderly now, quirky and increasingly eccentric, rarely follow the rules and use methods that the bureaucracy disparages.

Apparently there actually was a PCU, attached vaguely to the code breakers of Bletchley Park. Christopher Fowler’s father worked there, and so the novelist has had enormous fun imagining a cast of similar characters drifting into middle age and now into their dotage, still solving peculiar crimes. Bryant and May, for example, are the first to recognize the connections between the burning man’s victims, and they do so by recalling literary works, consulting savants and witches, spotting oddities at the autopsies, and talking endlessly. Bryant is getting increasingly unconventional, but his meanderings get results. And the result for the reader is a delightful mystery solved tidily at the end. I couldn’t imagine how Fowler might tie the disparate pieces together, yet the ultimate unveiling of the murderer makes perfect sense, though the mists of London remain impenetrable as the novel closes. Like Bleak House, the classic precursor of Bryant & May and the Burning Man. – Ann Ronald

Also available by Christopher Fowler: Full Dark House; The Water Room, Bryant & May The Victoria Vanishes; Seventy-seven Clocks; Ten Second Staircase; Bryand and May and the Invisible Code; Bryant & May White Corridor; Bryant & May and the Memory of Blood; Bryant & May the Bleeding Heart; Roofworld; Bryant & May on the Loose; Bryant & May Off the Rails; Spanky; Red Bride; The Sand Men; Hell Train; Sharper Knives; Nyctophobia; Old Devil Moon; Disturbia; Bryant & May London’s Glory; Personal Demons; The Devil in Me; Film Freak; Flesh Wounds; Demonized; Darkest Day; The Curse of Snakes- Hellion; Calabash; 21 Short Stories; Bryant & Mays Mystery Tour; Breathe: Everyone Has to Do It. 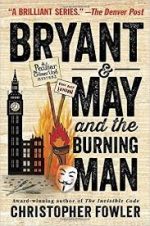 Ann Ronald is a retired English professor from the University of Nevada, Reno. Author of dozens of reviews, she’s also written a number of books about the American West. They include literary studies such as The New West of Edward Abby and Reader of the Purple Sage, cultural studies such as GhostWest and Oh, Give Me a Home, and nature writing such as Earthtones: A Nevada Album. Her latest is a work of fiction, Friendly Fallout 1953. Since retiring, she’s been reading vociferously, so “Bookin’ With Sunny” is giving her a wonderful opportunity to share thoughts about her favorite new discoveries.
More from this reviewer
PrevFinale
Snow Angels – Nordic NoirNext