Skeletons on the Zahara

Commerce, a 220-ton brig, set sail from Connecticut in 1815. Captained by James Riley, and manned by two experienced mates, four able seamen, four ordinary seamen, a cook, and a cabin boy, the Commerce headed south to New Orleans, and then crossed the Atlantic Ocean to Gibraltar. But en route from the Mediterranean to the Canary Islands, the trading voyage went horribly wrong when an unexpectedly strong current swept them off course. Helpless, they foundered onto the offshore rocks of Cape Bojador on the west coast of Africa. Skeletons on the Zahara tells the story of what happened next—their attempts to save the precious cargo, the arrival of plundering natives, the crew’s escape in the ship’s longboat, the ensuing hunger and dehydration, the decision to purposely go on shore again, and finally the crew’s surrender to an impoverished band of Arabs. All this takes place in the first 100 pages of Skeletons on the Zahara. The remainder of the book describes the desert ordeal that followed.

Dean King builds the story from two direct sources. In 1817, Captain Riley published Sufferings in Africa, detailing his experiences. Riley’s book was extremely popular, with several editions, printings, and translations into other languages. Another survivor, able seaman Archibald Robbins, wrote his own account a year later. Using these two versions as the basis for Skeletons, King then adds useful information about nineteenth-century sailing procedures, other shipwreck narratives in similar situations, scientific data, and historic tribal and Bedouin conditions in West Africa. He personally followed the routes described, riding on camels and finding their gait quite excruciating (unlike the mariners, however, King had enough food). So Skeletons on the Zahara A True Story of Survival  is a lively narrative that is informative as well as entertaining, colorful and totally convincing.

I always appreciate the words of an accomplished researcher who also writes well, and King writes especially well. Occasionally he quotes either Riley or Robbins, but essentially it is King’s own prose that makes Skeletons such a readable saga. Adroitly, he moves in and out of first Riley’s consciousness, and then Robbins’s. Immediately after the Commerce’s foundering, as “the brig settled and the waves broke with increasing strength over the deck, Riley studied the billowing horizon around them in the dim light of a quarter moon rising to the north of east. . . The Sahara abuts the sea in a mutable front of rust-and dun-colored cliffs, black rock, and slopes of wind-scoured sand. As the sea undermines the desert, the rocks and sand tumble in, altering the shoreline and creating new hazards. Riley strained to see in the dark. Catching faint glimpses of reflected moonlight, he determined that the shore was not far, perhaps two hundred yards. Reaching it was their only chance.” And here is Robbins onshore a few weeks later. His “ears, nose, and sometimes his mouth filled with grit. . . As he walked, the clinging sand chafed his skin, rubbing him raw between the legs. His cracked throat plagued him. The sand obsessed him. During lulls in the wind, he tried desperately to rid himself of it, but without water it was impossible. Frantic, he caught his urine and washed his face and body with it.”

The last pages of Skeletons recall those who were separated from the Riley and Robbins, and never were heard from again. King also relays the facts of the survivors’ later lives. The cabin boy lived to be eighty-two! Finally, King includes meticulous notes, outlining exactly where he found his materials, when he was following Riley and Robbins directly and when he was forced to be more innovative with the dialogue and depth of details. In sum, Skeletons is a model of creative nonfiction, exemplifying narrative scholarship at its most successful.       – Ann Ronald

Also available by Dean King: Feud The Hatfields and McCoys; Unbound A True Story of War, Love and Survival; Death in Dallas the Assassination of JFK; Superman Exposed, The Incredible Story of the Man of Steel; Titanic, the Sinking of the Unsinkable; 9/11 The Tragic Day that Changed America; Batman Defender of Gotham City; Wolverine, The Amazing Story of Marvel’s Most Dangerous Mutant; The Amazing Spiderman; The Incredible Hulk; Ironman, A History of Marvel’s Armored Avenger; Patric O’Brian, A Life Revealed. 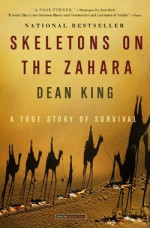 Ann Ronald is a retired English professor from the University of Nevada, Reno. Author of dozens of reviews, she’s also written a number of books about the American West. They include literary studies such as The New West of Edward Abby and Reader of the Purple Sage, cultural studies such as GhostWest and Oh, Give Me a Home, and nature writing such as Earthtones: A Nevada Album. Her latest is a work of fiction, Friendly Fallout 1953. Since retiring, she’s been reading vociferously, so “Bookin’ With Sunny” is giving her a wonderful opportunity to share thoughts about her favorite new discoveries.
More from this reviewer
PrevThe Book of Nonsense
Lost and FoundNext