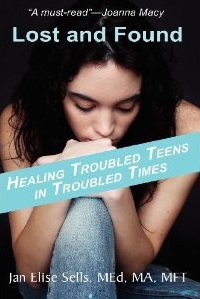 Based on a program of Conflict Resolution developed by author Jan Elise Sells, Lost and Found: Healing Troubled Teens in Troubled Times is a title that would seem to be of interest primarily to educators, parents and school psychologists. As a layperson with grown children, I found Lost and Found to be much more than a blueprint for a successful middle school counseling program.

To begin with, it is a memoir of the author’s life wrapped up in the history of a counseling program begun at Martin Luther King, Jr., Middle School in Berkeley, California. It is also a chronology of how this community (government, churches [St. Joseph the Worker], parents and educators) came to regard the importance of wisely intervening, with respect and patience, into the lives of their troubled teens.

Jan Elise Sells, who began her career as a teacher, eventually returned to university to study for her MFT, and then returned to the classroom as a part-time teacher (French) and an interning counselor (working for her MFT licensure). The middle school she returned to was Berkeley’s somewhat notorious “King,” a school where she would remain for twenty years, not as a teacher, but as an innovator of a counseling program that would eventually gain national attention for its astounding success.

I came across the book on a friend’s coffee table and found an intriguing Table of Contents, divided into sections specifying those areas of trouble which brought young teens to the attention of Ms. Sells: I: Bullying and Conflict Resolution; II: Physical and Emotional Abuse and Neglect; III: Sexual Abuse and Rape; IV: Non-Suicidal Self-Injury; V: Substance Abuse; VI: Sexual Orientation Issues in a Homophobic Society; VII: Suicidal Thoughts; VIII: Teen Pregnancy; IX: Gangs and Violence; X: Loss and Grief. Nearly all of these teen issues can be found in any middle school in the country – urban, suburban and even small town. I was hooked halfway through the Introduction.

Sells has braided the strands of her own life experiences with those of her young clients and the community of Berkeley into a book of beauty and depth. The breadth of Sells’ patience and loving ability to listen to her young clients is awesome (and I don’t use that word lightly). Each chapter tells the story of one or more students (such as the small group of 8th grade boys all dealing with the recent deaths of a father or father-figure). Her method of conflict resolution began with a set of rules, prominently posted on her office wall, and a contract signed by the involved parties, stating that they would agree to follow the rules. The rule to listen and remain silent while someone else is speaking became the springboard to understanding what it meant to respect another person. That rule was held for Sells (and those interning counselors trained by Sells) as well as the students. These rules were relevant for all the counseling Sells performed:

For twenty years the teachers at King would call upon Sells to intervene on behalf of a student they believed was in trouble, or heading for trouble. These were teachers who recognized a slipping of grades or a change in classroom behavior, but teachers weren’t the only ones requesting her help. There were mornings when Sells would find a note slipped under her office door, a note from a student asking for help.

What I found completely captivating, were the poems, written by students, introducing each section; the stories of the author running into some of her student/clients years after their time at King; and the revelation that it was Jan Sells who, after reading in the paper that Alice Waters had an idea about making use of the unused section of property belonging to King Middle School, brought the article to the attention of King’s principal, encouraging him to contact Waters. Jan Sells was not just an integral part of King, she was also a most involved citizen of the larger Berkeley community.

I wish I were still working in a bookstore because I would hand-sell Lost and Found to every parent and teen who might come through the door. The text is honest and straight-forward and speaks not just to the heart, but equally as important, it speaks to the mind. It makes sense. Hindsight is seldom helpful, but Lost and Found made me wish there had been a Jan Sells when I was growing up. Make no mistake, this book is a blueprint for Conflict Resolution and should be of keen interest to school counselors, but it is also a reminder that it wouldn’t hurt for all of us to have those rules posted in our homes and our workplaces. Lost and Found deserves a long and successful life.        – Sunny Solomon 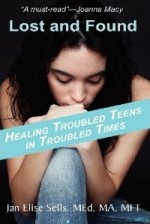 Sunny Solomon holds an MA in English/Creative Writing, San Francisco State University. She is a book reviewer for “The Clayton Pioneer” and her poetry and other writing has been published in literary journals, one chapbook, In the Company of Hope and the collection, Six Poets Sixty-six Poems. She was the happy manager of Bonanza Books, Clayton, CA and Clayton Books, Clayton, CA. She continues to moderate a thriving book club that survived the closure of the store from which it began. Sunny currently lives next to the Truckee in Reno, NV.
More from this reviewer
PrevSkeletons on the Zahara
Mrs. LetsaveitNext