Seven Tears into the Sea 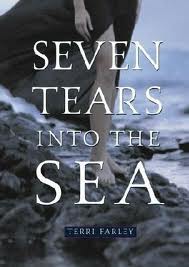 SEVEN TEARS INTO THE SEA

Seven years ago, Terri Farley’s novel Seven Tears into the Sea made its way onto my summer reading list. My fifteen-year-old self had an insatiable hunger for fantasy, especially if it involved mythological sea creatures. Farley’s title was the perfect hook, and soon after, I plunged into the world of selkies, sea lions who have the ability to shed their skins and take on a human form. When Sunny gave me this book to read, all the enthusiasm from that summer flooded back. I was ready to return to Mirage Beach and its hidden secrets.

With these eight words, Terri Farley brings us into the world of ten-year-old Gwen Cooke, whose life is changed by a mysterious encounter on the beach. It is midnight. A storm is brewing. She stands alone. A boy is in the water, and he shouldn’t be. Afraid for his safety, Gwen pleads for him to come back and begins to shed tears.

“Then, all at once, the man, sky, and beach are blotted out by a black wave.”

The last thing Gwen remembers is a Gypsy boy lifting her. He whispers, “Beckon the sea, I’ll come to thee. Shed seven tears, perchance seven years.” Is it all part of a dream? For Gwen, who has a history of sleepwalking, it might be. But others begin to speculate about what really happened that night, and Gwen’s family moves away.

At the age of seventeen, Gwen returns to Mirage Beach for the summer. Although Gwen looks forward to helping her grandmother run the Sea Horse Inn, she can’t escape the small town talk about the incident from her childhood. Gwen is curious to learn the truth herself, and the answers are closer than she thinks when a strange boy named Jesse comes into her life. Everything about Jesse is foreign–the lilt of his speech, his taste for raw seafood, and his lack of a physical address–yet, Gwen feels a strong connection to him. As love seeps into an unlikely relationship, Seven Tears into the Sea explores the seductive pull of the ocean. Farley taps into reserves of magic, coaxing readers younger and older to suspend their disbelief.

Coming back to Seven Tears into the Sea as an older reader, I found that my relationships with the characters changed in a meaningful way. As a teenager, I read Farley’s novel as though I were witnessing an older sister going through such rites of passage as falling in love for the first time and taking ownership of one’s identity. As an older reader, I could relate to the events in Gwen’s life in retrospect, but I also found certain themes to be more significant than they were before, particularly the idea of homecoming. Like Gwen, I have returned to people and places from my childhood, and I could reflect on how these relationships changed over time. My personal search, mirrored by Gwen’s journey, taught me a valuable lesson: Over time, we acknowledge that the past isn’t just a separate skin to shed but a vital part of who we are.

Seven Tears into the Sea is a book worth returning to, and for those joining Gwen on Mirage Beach for the first time, expect to be drawn into the magic of an unforgettable summer solstice.  – Joanne Mallari

Joanne Mallari holds a BA in English (Writing) with a minor in Spanish from the University of Nevada, Reno. She currently teaches preschool at St. John’s Children’s Center. Her interests include poetry, shower recitals, and dancing at random. Joanne lives in Reno, NV.
More from this reviewer
PrevRailsea
The Name of the StarNext