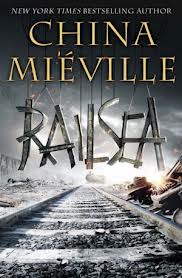 China Miéville is a national treasure. I only wish he were our national treasure. Let’s adopt him! Mind you, this is coming from a reader who is not crazy about fantasy or science fiction, but ever since reading and loving Kraken, his over-the-top novel about a monstrous giant octopus stolen from a London museum and hunted by zealous evil-doers bent on getting their hands on the poor devil for religious reasons of all persuasions – well, doesn’t it just make sense that you’d want to read the next novel, and the next?

And so we come to Railsea, Miéville’s latest novel. It is being marketed as a book for teens, but that’s just silly, because Railsea is a book for everybody, especially if you like storytelling at its best. The title is exactly what the book is about. “Rail” as in railroad and “sea” as in a large body of water, except it’s not water, it’s rails and most of the story takes place on a sea of railroad tracks. How much fun is this? We’ve arrived at the fantasy part without even opening the book.

Railsea is the story of two people: one, a young lad, an orphan, and the other, Captain Abacat Naphi, the female captain of the great moletrain Medes. The boy’s name is Sham Yes ap Soorap and he is apprenticed to the train’s doctor. Captain Naphi and her moletrain crew are pursuing the Great Souther Mouldwarpe, the same mole that has not only evaded Naphi’s harpooners, but has actually bitten off part of her arm in a much earlier hunt. The mole and other strange creatures, large and small, live under the soil beneath the rails. The captain is a woman possessed by her passion (or, as we come to understand such enthusiasm, her “philosophy”) as a moler. When we first meet her, we see at once that she is bent on killing the giant mole that lives beneath the great railsea, not just for its oil and skin, but for that part of her arm no longer there.

Some readers might think that China Miéville’s Captain Naphi is a new version Henry Melville’s Captain Ahab. Maybe. Except Miéville’s captain is female and she gets her giant whale, excuse me, giant mole by the end of the first chapter. That is as much detail as you will get from this reviewer. Here are some facts that will not give the story away: 1) if you fall off the train you may fall deep into the soil and never survive; 2) there are parts of Sham’s world that are much changed from the way they are today; 3) it is good to have a passion in one’s life, a philosophy; 4) friends, old and new, are worth risking one’s life for; 5) finding one’s philosophy is also worth risking one’s life for.

The wonder of Railsea is not just the story, but the telling of the story. In the Prologue, the first words we read are: “This is the story of a bloodstained boy.” But the narrator assures us that this is not “as macabre as it sounds.” He suggests to go in reverse: . . . “let this engine go back. Just to before the boy was bloodied, there to pause & go forward again to see how we got here . . . to a big question mark in a young man’s head.” We are to read of the railsea and its trains and tracks that seem to lead to the end of the known world, but we do this reading aboard the train of Miéville’s telling.

What does it look like, this great sea of rails? “Long straights, tight curves; metal runs on wooden ties; overlapping, spiralling, crossing at metalwork junctions; splitting off temporary sidings that abutted & rejoined main lines.” How do the trains manage? “. . . wye switches; interlaced turnouts; stubs; crossovers; single double slips. & on the approaches to them all were signals, switches, receivers, or ground frames.” The narrator’s vocabulary is a blend of rail and maritime so that the reader holds tight when the moletrain tacks.

Not all trains are molers, others run on rails to hunt for whatever might be salvageable from train wrecks, while pirate trains hunt the scavengers for their salvage, and naval trains hunt the pirates. The author gives a literary nod to RLS in the pet bat that often perches upon Sham’s shoulder. Some trains are Bajjers, moving on rails, but powered by great sails catching the wind. It comes to pass that Sham Yes ap Soorap comes in possession of something he ought not have seen, and even after the object is no longer in his possession, the knowledge of what he has seen remains and becomes the seed from which his own philosophy will grow. Such philosophies can be dangerous, and in Sham’s case, what he knows is being hunted by pirate and naval trains alike.

Miéville’s tale of adventure, bravery, betrayal, courage and the very beginnings of love is as fresh and original as it is ancient and everlasting. Railsea is a book that begs to be read aloud, even if you are your own audience, but be prepared, for Miéville has a near madcap love of English and your tongue will be sorely tried (and possibly tied). My advice is to first read it for yourself and then grab that marketable teen and anyone else you can find and begin at the Prologue: “This is the story of a bloodstained boy.”    -s.s.

Sunny Solomon holds an MA in English/Creative Writing, San Francisco State University. She is a book reviewer for “The Clayton Pioneer” and her poetry and other writing has been published in literary journals, one chapbook, In the Company of Hope and the collection, Six Poets Sixty-six Poems. She was the happy manager of Bonanza Books, Clayton, CA and Clayton Books, Clayton, CA. She continues to moderate a thriving book club that survived the closure of the store from which it began. Sunny currently lives next to the Truckee in Reno, NV.
More from this reviewer
PrevNext to Love
Seven Tears into the SeaNext