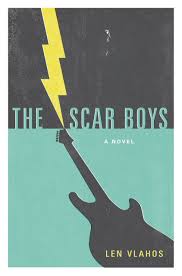 “And I’m Harbinger Robert Francis Jones, the king of darkness and despair… and we…are the Scar Boys!”

Is Harry “Harbinger” Jones’s name a crystal ball into his future? Harry was named for Robert Kennedy on the same day he was assassinated. Harry’s father, who had worked on Kennedy’s staff, could think of only one name for his new baby boy and that was Harbinger Robert Francis. He said the Harbinger of Doom had killed Robert. So Harbinger, aka, Harry, was to go through life with that name looming over him.

The Scar Boys is  actually Harry’s college admissions application essay. He apologizes for going past the 250 word limit and instead writes his life story hoping to impress the admissions panel that he’s a good candidate for their school. He has a lot to share and reveal about himself, but he is truthful and admits he’s really only interested in playing music and that the application was because of his parents’ urging.

His essay begins with the details of his unhappy childhood as an often picked on boy. The turning point from the minor teasing and bullying comes before a lightning storm when he is tied to a tree by his tormentors. During the terrific storm, the tree Harry is tied to is hit by lightning. Harry is horribly burned and scarred by the lightning. Was he always destined to be a deformed scapegoat for every kid with a grudge or self-esteem problem?

Lightning only strikes once, doesn’t it? But in Harry’s case, the pain and terror strike over and over. Not only is he scarred outside, but his self-esteem has fizzled, making him a shell of a boy.

When he meets Johnny McKenna, one of the most popular boys in school, things change for Harry. He doesn’t know or care why Johnny wants to be his one and only friend. Befriending Harry makes the calculating and sophisticated Johnny seem like a true humanitarian and good person, which he can be if he’s in a good mood

Johnny wants to start a punk rock band and persuades Harry to join. Whatever Johnny wants, Johnny gets. The band becomes Harry’s everything and the springboard for his emotional healing and start of his journey into adulthood. Harry learns not all scars are on the outside; even the popular and dynamic Johnny has his demons and issues. When Harry and Johnny are at odds over the one female member in the band, the band harmony is out of tune, threatening to tear them apart. Both Johnny and Harry are instrumental in the other’s healing. In the process, they live up to the name of their band, The Scar Boys.

First–time young adult author Len Vlahos writes a coming of age novel that should appeal to teenagers and adults alike. His knowledge of music takes us from Harry’s troubled and taunted childhood to the beginning of The Scar Boys band and a glimpse into workings of the recording industry. Although I read the entire book sitting on a sunny beach, I could feel Harry’s darkness and longing for a normal life. The Scar Boys is an easy read with a message for everyone, young or old, who is scarred emotionally or physically.   – Sue Cornfield 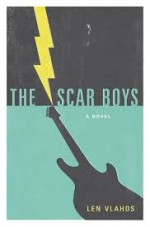 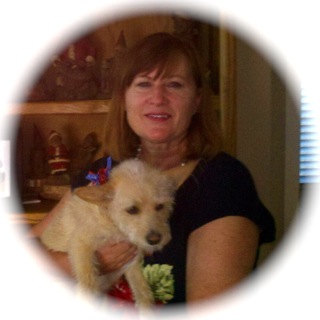 Susan Cornfield Dugan holds education degrees from Central Michigan University and the University of Nevada, Reno. She is the retired Director of Federal and State Programs for the Lyon County School District. During her tenure as an educator she had a textbook and numerous articles published. She began writing young adult fiction as a teacher, often using caricatures of her students as jumping off points for her stories. She finds young adult literature fun and interesting to read. Susan graded Nevada Writing Proficiency Exams for over 20 years, but retired to focus on her writing. She is currently writing a young adult science fiction series. She lives in Sparks with her husband, two cats, and adorable Terrier, Hailey; who listens with great interest to Susan’s stories and loves them all!
More from this reviewer
PrevWhite Ginger
The BearNext