San Francisco, A Map of Perceptions 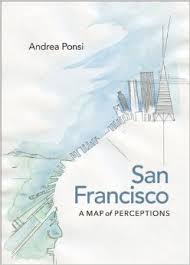 SAN FRANCISCO, A MAP OF PERCEPTIONS

Andrea Ponsi’s San Francisco: A Map of Perceptions is a small, lovely gem – or, perhaps, a handful of gems. This slim book (just 108 pages from cover to cover) is by turns and all at once a picture book, a geography book, a history book and a long, dreamy prose poem. I have so far read it straight through, jumped from section to section looking for my own favorite landmarks and landscapes and neighborhoods, and read it aloud to my eight-year-old at bedtime; it is not just a portrait of the City but a hundred portraits, and it accommodates as many different ways of reading as its subject does of seeing.

Ponsi, the renowned Italian architect, and educator now living and working in Florence, lived for a time in San Francisco (more than twenty years ago, he tells the reader), and clearly, the experience has remained vividly present to him. In this book, he sketches, with words and line drawings, those memories and impressions.

The book begins where he began, in North Beach, standing outside the Stockton Street apartment building that was his first home in the City. From that building, with its bow-windowed façade in front, scaffolding in back, and breathtaking view of the Bay and the ocean from the rooftop, he moves out, writing and drawing whatever catches his eye: the history of the City’s layout, neat grids slashed through by Market Street and elegantly upheld by Dolores Street (I am writing this review only a block and a half from Dolores and its palms and greenery), broken up by impossible hills, buried and remade by earthquakes. Ponsi considers the ways out: the highways and bridges, the beach with its treacherous rip tides, the Golden Gate Bridge and the pull of the water underneath. He shows us, in no particular order but delighted disorder, the Vaillancourt Fountain; the buffaloes; the “copper skin” of the new DeYoung Museum, born anew since his last visit here.

Ponsi looks at the expected sights: Lombard Street, Coit Tower, Alcatraz, the cable cars. He looks at expected sights unexpectedly (the Transamerica Pyramid becomes: “Recipe: Take one pyramid, Egyptian is fine. Grasp its top with your thumb and forefinger. Then pull up, stretching the point as if it were a piece of very elastic rubber. Pull higher, higher, and higher, until its height is at least ten times the width of one side of the base. Prick it with dozens of windows all alike. Then add two ears: the concrete elevator shafts…”). He looks at the many fogs, the many colors, City Lights, Ocean Beach, the houseboats across the Bay in Sausalito, the Claremont across the Bay snug in the Berkeley hills. His pictures swim throughout the book, clean lines with a draftsman’s precision, awash in soft fog-washed colors.

Though in no way a conventionally practical guide to the city, San Francisco: A Map of Perceptions is a precise and true guide to its physical logic (and illogic) and the rhythms of its daily life. In barely a hundred pages and three dozen drawings, Andrea Ponsi has created a true, vivid portrait of the city. It will be immediately recognizable to any reader who has lived in or visited San Francisco and will give any reader who hasn’t yet a hundred and eight new reasons to. And you may never look at a simple lamppost the same way again.   – Jacqueline Smay 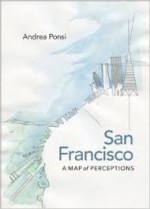 Jacqueline Smay holds a BA in English, with a concentration in creative writing, from Vassar College. She has been proofreader and editor of Lost In The Grooves, Scram's Capricious Guide to the Music You Missed and Swordfishtrombones of the 33 ½ series. She is acquisitions editor for Plus One Press, San Francisco, where she has worked as editor on the JP Kinkaid mystery series, the latest Sarah Tolerance novel, and on piano... Nicky Hopkins! The Extraordinary Life of Rock's Greatest Session Man, and Sam the Bat. Her writing is included in Scram's Capricious Guide to the Music You Missed. Out of economic necessity she also does database management and scientific MS copyediting at UCSF. She lives in San Francisco with her husband and two children.
More from this reviewer
PrevThe Painted Girls
The ImaginaryNext