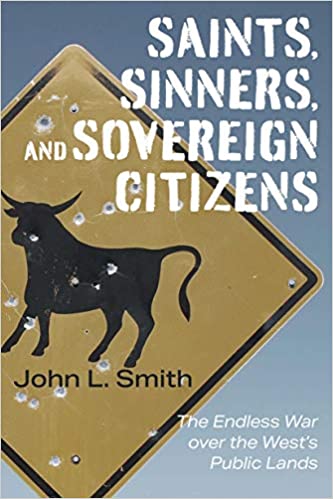 Saints, Sinners, and Sovereign Citizens: The Endless War over the West’s Public Lands

A journalist’s look at Clive Bundy and others who rebel against federal control of public lands.

John L. Smith’s Saints, Sinners, and Sovereign Citizens nicely complements Betsy Gaines Quammen’s American Zion (which I previously reviewed in “Bookin’ with Sunny”). Both books examine Cliven Bundy and his family as prototypes of those restive westerners who continue to rebel against federal control of public lands. The subtitles of the two indicate their differences. Where Quammen wants her readers to think about “Clive Bundy, God, and Public Lands in the American West,” Smith focuses more directly on “The Endless War over the West’s Public Lands.”    Quammen’s thinking is more conceptual and philosophical; Smith’s, more reportorial and pragmatic.

That said, Smith is an excellent reporter, both instinctively and professionally. He interviews the participants in a host of western confrontations, he cites newspaper, radio, and television accounts of various incidents, he examines the trials that ensued after the Bunkerville showdown (when federal agents attempted to round up Bundy cattle grazing illegally), and after the Malheur occupation (when two Bundys and their followers took over the wildlife refuge and refused to leave). Smith contextualizes these events, too. He reports on similar incidents throughout western history, keying in on the Sagebrush Rebellion and also noting multiple historical precedents.

As a scholar, I have an ingrained notion of how a book like this should be designed. In graduate school, we’re taught to make some sort of argument in every professional piece of prose; to convince our readers to follow our logic and agree with our reading of history or literature or cultural trends. As a journalist, Smith generates a different design. He reports the facts broadly, deeply, and thoroughly. He doesn’t extrapolate, and he doesn’t try to convince his readers of any particular point of view. He writes as if he were tasked with composing a series of lead articles in an evening newspaper. Moreover, he writes authoritatively. A reader can trust the information he offers, can have confidence in his neutrality.

Given this studied balance, Saints, Sinners, and Sovereign Citizens not only scrutinizes each of the Bundy escapades but also brings in the exploits of those who joined their stand-offs. I was especially interested in the parallels Smith draws with the Oath Keepers and other right-leaning groups coming under the media microscope today. But Smith isn’t urging his readers to rush to judgment. Rather, he simply makes rhetorical (and physical) comparisons, leaving his readers to evaluate their own predispositions when confronted with solid reporting and indisputable facts.

To anyone interested in the ongoing disputes over public lands, I strongly recommend reading Smith’s book. Because he is a Nevada-based free-lance reporter (indeed, many of the incidents he not only attended at the time but published articles about what happened, where, and when), he uses Nevada as a petri dish. And unlike Quammen, Smith finds the politics more fascinating than the ideology. One chapter, “The Senator from Searchlight,” particularly addresses the political complexities. It tells the story of United States Senator Harry Reid and how his career fluctuated between the financial and occupational claims of hard rock mining and the aspirations of the environmental community. Reid cared about both, sometimes at the expense of the ranchers. Smith’s reporting on this complicated man doesn’t shy away from contradictions in Reid’s legislative stances. Smith is fair and accurate. Like the rest of Saints, Sinners, and Sovereign Citizens, the reporting indeed is balanced. I write this, not with tongue in cheek but with great applause for Smith’s content and his prose.  —  Ann Roland 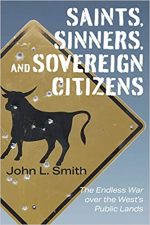 Ann Ronald is a retired English professor from the University of Nevada, Reno. Author of dozens of reviews, she’s also written a number of books about the American West. They include literary studies such as The New West of Edward Abby and Reader of the Purple Sage, cultural studies such as GhostWest and Oh, Give Me a Home, and nature writing such as Earthtones: A Nevada Album. Her latest is a work of fiction, Friendly Fallout 1953. Since retiring, she’s been reading vociferously, so “Bookin’ With Sunny” is giving her a wonderful opportunity to share thoughts about her favorite new discoveries.
More from this reviewer
PrevThe President is Missing
Too Small TolaNext