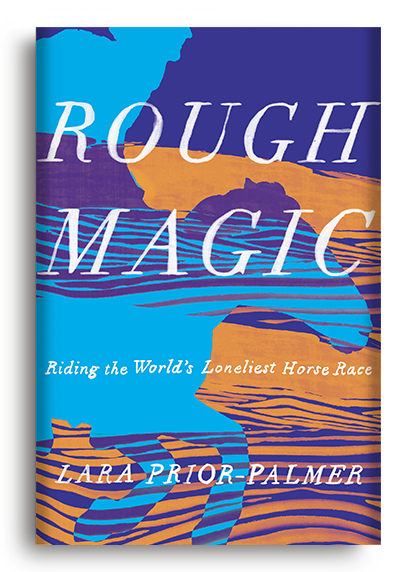 The Mongol Derby featured in Rough Magic is a one-thousand-kilometer (just over 621 miles) endurance race across the Mongolian grasslands on the backs of an assortment of wild ponies. It is an endurance ride like no other.

When eighteen-year-old London resident Lara Prior-Palmer hit the Apply button on the Derby’s website, thirty other contestants had already signed on, the August application deadline had passed, and if accepted, she’d have only seven weeks to acquire sponsors, and pick up her riding skills before the “start gun.” The author describes herself at that age as “a bundle of urges, a series of plunges.” No kidding.

I begged for a review copy of Rough Magic. I love horse stories, horse racing, underdogs, and amazing finishes. Before I get into what makes this story so worthwhile, let me tell you a bit about the Derby. 1) It is “an unsupported one-stage race”; 2) Riding, without penalty, is between 7:30 a.m. and 8:30 p.m.; 3) No wake-up calls. 4) “Positions are policed by rider satellite trackers”; 5) no set route; 6) at each of the twenty-five horse changing stations (urtuus), each rider picks their own mount; 7) map books “with wriggly red lines” are supplied, but not toilet paper and other necessities; 8) the Derby is filmed for worldwide broadcast; 9) injuries are expected; 10) not everyone will finish.

We know before reading Rough Magic that Lara Prior-Palmer is the first female to win and youngest rider to enter the race. The “Rough” is how the heck she did it, and the “Magic” is her writing. The first day of the race, atop a pony who doesn’t mind being last, Lara “enters a silent tantrum,” wondering why she even entered the race when she could be home “sharpening pencils.” Even with her GPS, she has no idea where she is. She finally dismounts and walks alongside her pony until a mounted Mongolian herder comes along, urging her to ride again, and once back in the saddle the herder “whips” her mount back into a trot.

Lara names each of her ponies by their looks, gaits, and stamina. By day three, she finds her “legs are lead.” About the fifth day, she takes her first fall when her pony stumbles into a marmot (which she calls hamster’s) hole. On the sixth day, she finds that she is in fifth place. She is one of three women competing, and the rider in the lead is also a young woman. ‘Choo choo’, is the Mongolian equivalent to ‘giddyup’. On the seventh day her mount hears the words choo choo from another rider and takes off with Lara barely in the saddle. It is atop this mount when we find out exactly what drives Lara: “His legs throttle as if dying to catch up with themselves.” “If I move my heels a millimeter he bolts harder.” “He’s a madman awakened. I love it, him, his intention.”

She is nuts about horses, riding, and riding fast.

The Derby’s distance is only one level of difficulty. The crap-shoot of picking a horse that wants to race, of never knowing for certain if you are headed in the right direction, and worst of all the weather, make this a one-of-a-kind event. While riding, sometimes alone and other times in small groups, the author takes us back to her family, her brothers, her dad, her Olympic medal-winning equestrian aunt, and especially her mum. Her observations of her fellow riders, the wind-blown greenery, the everywhere marmots and the holes they dig, the dangerous rainfalls, her insights into why she is even in the race, are honest and often laugh out loud funny.

Mostly you will love horses, horses of any sort, to love this book. Loving horse racing is secondary. Nothing prepares the reader to take in the author’s grit, bravery, and sheer hutzpah, not to mention her life insights, as breathtaking as the Mongolian plains. You will love this book to the last leg of the Derby and beyond. I can’t wait to read whatever comes next from this talented young writer (rider).   – Sunny Solomon 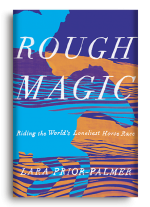 Sunny Solomon holds an MA in English/Creative Writing, San Francisco State University. She is a book reviewer for “The Clayton Pioneer” and her poetry and other writing has been published in literary journals, one chapbook, In the Company of Hope and the collection, Six Poets Sixty-six Poems. She was the happy manager of Bonanza Books, Clayton, CA and Clayton Books, Clayton, CA. She continues to moderate a thriving book club that survived the closure of the store from which it began. Sunny currently lives next to the Truckee in Reno, NV.
More from this reviewer
PrevI Want My Hat Back, loving one’s hat
Mostly White if You Don’t Look More CloselyNext