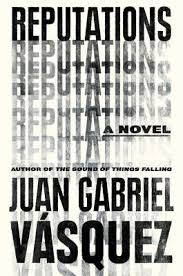 In this dizzy political season, fiction about an artistic facet of political commentary provides a refreshing change from television’s punditry. Reputations, by Colombian author Juan Gabriel Vasquez, delves into the imagined career of an aging political cartoonist, Javier Mallarino.  For forty years, Mallarino’s powerful caricatures—“A stinger dipped in honey”—have impacted the lives of political figures in Bogota and around the world.  His drawings and his captions, for good and for ill, often have dictated public opinion at home and abroad.

Public recognition of Mallarino’s achievements provides the lynchpin of Reputations.  A celebration at the Teatro Colon, the national theatre of Colombia, offers Mallarino an opportunity to think about his past, his drive to expose the foibles of others, his indifference to the feelings of those he has skewered, his increasing isolation from his family and friends. Who am I, really, and what have I accomplished?  That is what Mallarino asks himself in Reputations.  Most of his musings take place in his imagination, although the cartoonist does give a powerful communal response to the accolades that come his way on that special night.

The celebration also reconnects Mallarino with some unfinished business.  He sees his ex-wife for the first time in decades; their daughter chooses to be absent.  He also encounters a young woman who was once his daughter’s friend; a girl featured in an inexplicable incident, a girl Mallarino hasn’t thought about for years.  Intellectually, he reconstructs the past, musing about what did or did not occur and about how he subsequently behaved.  Then he tries to explain.

Reputations consists of both interior and exterior monologues, with Mallarino dwelling on his role as a man who stings others with honey.  And sometimes stings them with a poisoned pen.  For most of his career, Mallarino took delight in the downfall of politicians he disdained.  Like Charles Dickens, he would look at a person and see a weakness, either physical or psychological. Then he would dramatize that weakness, using captions and drawings instead of paragraphs.  Published daily, his cartoons had the power to destroy men’s lives, and sometimes did so.  Until now, Mallarino didn’t care.

This very provocative novel forces the reader to think about political commentary in a way more connected to the past than to the present.  Nowadays, twenty-four-hour news channels, along with Facebook and Twitter and Instagram, give rapid-fire responses soon forgotten.  In Mallarino’s day, however, his cartoons lingered in his viewers’ minds.  His drawings would have long-ranging impact with ongoing repercussions.  The incident with young Samanta Leal, and the subsequent cartoon that Mallarino drew, affords the occasion for some very profound considerations about the public sphere.

I’m beginning to sound like a broken record, but once again I’m grateful to Sunny for handing me a novel I might otherwise have missed.  I particularly appreciated reading Reputations during a political season rife with the ruination of reputations.  Food for thought, thinking about Mallarino’s own reputation, and how he stung with poisoned honey the reputations of others.   –  Ann Ronald

Also available by Juan Gabriel Vasquez: The All Saints’ Day Lover; The Sound of Things Falling; The Secret History of Costaguana; The Informers. 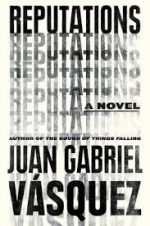 Ann Ronald is a retired English professor from the University of Nevada, Reno. Author of dozens of reviews, she’s also written a number of books about the American West. They include literary studies such as The New West of Edward Abby and Reader of the Purple Sage, cultural studies such as GhostWest and Oh, Give Me a Home, and nature writing such as Earthtones: A Nevada Album. Her latest is a work of fiction, Friendly Fallout 1953. Since retiring, she’s been reading vociferously, so “Bookin’ With Sunny” is giving her a wonderful opportunity to share thoughts about her favorite new discoveries.
More from this reviewer
PrevThe Skeleton Crew
The Archer Files, Ross MacDonald RevisitedNext