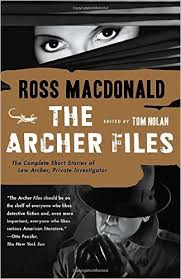 Connoisseurs of 20th Century detective fiction regard the Lew Archer books by Ross MacDonald as the best ever written. The plots are original, the characters vivid, and the language is elegant and laced with occasional gems of sardonic humor on the part of Lew Archer, Private Investigator. Archer (known in the movies as Harper played by Paul Newman) appears in eighteen novels and a handful of short stories. For the most part, these are really novellas.

Until now, the shorter Archer stories have been collected in two books: The Name is Archer and Lew Archer, Private Investigator. Both of these are long out of print, difficult to locate, and expensive to buy. So I’m delighted to report that the complete Archer short fiction is now available in a trade paperback format as, The Archer Files, The Complete Short Stories of Lew Archer, Private Investigator, from Black Lizard, a division of  Vintage Crime.

Nolan has also gone through notebooks kept by Ross MacDonald containing ideas and fragments of unwritten Archer fiction and includes them in this collection. There are fourteen of these and, while frustrating at times, they add about a hundred pages to the volume.

The book’s hardcover edition, from 2007 and now out-of-print, is the work of the good folks at Crippen and Landru, publishers. Despite naming themselves after a couple of real-life murderers, C & L is dedicated to restoring the great but endangered mystery fiction of the ages. If you think the name lacks good taste, consider the books of Felony and Mayhem, publishers of the Midsomer Murders novels by Caroline Graham.

Nolan puts his finger on the qualities of MacDonald’s Lew Archer that make his adventures worthwhile. He describes Lew Archer as “a person who grew from a rather brash, if self-defeating wise guy, into a poetically observant and almost religiously empathic human being.” All fictional detectives should be so lucky as to have Ross MacDonald chronicling their exploits.

I give The Archer Files my highest recommendation. – Dan Erwine

Also available by Ross MacDonald: Archer in Jeopardy; Sleeping Beauty; The Drowning Pool; The Wycherly Woman; The Dark Tunnel; Find a Victim; Trouble Follows Me; The Way Some People Die; The Three Roads; Meet Me at The Morgue; The Ivory Grin; The Ferguson Affair; Blue City; Black Monday; The Far Side of the Dollar; The Doomsters; The Goodbye Look; The Blue Hammer. 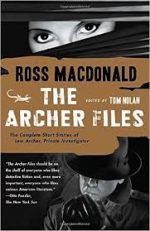 Dan Erwine holds a BS in Telecommunications, San Diego State University. Dan recently retired after four decades in radio broadcasting. His background San Diego stations KFSD and NPR's KPBS, and KUNR, Reno, NV. Over the years, Dan has produced and hosted a number of talk shows and interviewed over five thousand writers in almost every genre and career, from such notables as David Brin to Seamus Heaney, Allen Ginsberg, Judy Collins, Charlton Heston and Wally Schirra. Dan is a comic book aficionado and has a special interest in film, science fiction and mystery. He lives with his wife in Reno, NV.
More from this reviewer
PrevReputations
The Whole Town’s TalkingNext