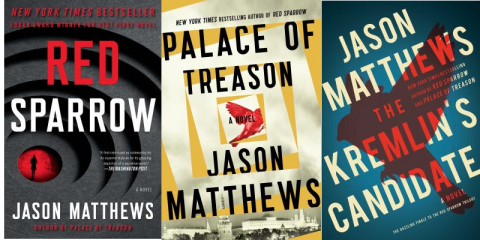 A twenty-first century John LeCarre! That is how I would describe Jason Matthews, author of the recently published Red Sparrow spy novel trilogy. Rather than running Cold War operatives and double agents, Matthews situates his characters in Vladimir Vladimirovich Putin’s Russia, where Putin, not Stalin, pulls the Machiavellian strings. Matthews ranges farther afield from Moscow, however, into places of contemporary tension like Turkey, Iran, eastern Europe, and China. The spycraft is updated, too, with more electronic gadgetry and more sophisticated weaponry. What remains the same is the cruelty, the chicanery, the incredible layers of conspiracy and intrigue, the plots that unbelievably layer themselves together.

The Red Sparrow trilogy features two master spies, one from the United States and one from Russia. Nathaniel Nash, who works for the CIA, is initially assigned to Moscow, then sent to Helsinki where he meets Dominika Egorova, a member of the Russian foreign intelligence team. She means to seduce Nate, to compromise him, and possibly to recruit him. This process is at the heart of Matthew’s first book, Red Sparrow. Dominika goes to Sparrow School, learns the arts of spycraft seduction, then practices her sparrow wares on the unsuspecting Nate. What could possibly go wrong?

Nate and Dominika fall in love. Their romance resonates throughout the trilogy, adding complicated dimensions to their foreign assignments and their professional responsibilities. One of the lovers eventually is recruited by the other, so the remaining two novels focus on their respective careers and the complex ways their actions intersect, then keep them apart, then draw them together again. In Palace of Treason, Dominika befriends Putin and moves up the Kremlin hierarchy. Meanwhile, because of his attraction to Dominika, Nate’s career falters slightly. But he is too valuable to the CIA, his street craft too respected, and his talents too vital to lose.

By the third Red Sparrow novel, The Kremlin’s Candidate, Dominika is at the top of her game, perhaps soon to be promoted, poised to become the chief of counterintelligence. Perhaps poised to become Putin’s mistress, too, as Nate suspects but cannot verify. Having watched Putin on television, I thoroughly enjoyed Matthews’ characterizations, dressing the Russian in his expensively-tailored blue suits, showing him nodding his Russian head in “a half-smile first perfected in AD 41 by Caligula” while Dominika wonders “if he chose his neckwear to match his eyes.”

Other characters in the trilogy are equally well-drawn. Dominika suffers malevolent peers and insecure supervisors who themselves jockey for Putin’s favors. One of her gifts is synesthesia, “a brain wired to see colored auras around people and thereby to read passion, treachery, fear, or deception.” In her eyes, her foes sport halos of deceitful yellow, or pulse with evil black. Her fellow sparrows move through the novels, too, in vivacious but also vicious ways. Nate’s CIA team, ostensibly more benevolent, nonetheless casts morality aside whenever they think necessary. Dominika’s co-workers have a tendency to die, but Nate’s closest colleagues reappear in all three books—brotherly Gable, nuanced Forsythe, calculating Benford. Each adds a dimension to the spycraft Matthews depicts.

As I read, I necessarily wondered about the accuracy of Matthew’s portrayals. Are these really the sorts of men and women responsible for national security? And are their overt and covert actions truly representative of what goes on today? Just as John LeCarre worked for Great Britain’s Secret Intelligence Service, MI6, so Jason Matthews (and his wife) had professional CIA careers. Matthews himself conducted recruitment operations and served as Chief of various CIA stations. I can only assume the reliability of his fictional reporting, even though it troubled me at times.

I worried over the veracity of the violence and emphatic sexuality. Make no mistake; the Red Sparrow trilogy is not for sissies or prudes. At times I found the cruelty and the prurience hard to read, and occasionally the three books sounded repetitious. Overall, however, I enjoyed what I learned and what I could extrapolate from what was implied. I think Matthews has taken the spy thriller genre to a whole new level, albeit a sometimes uncomfortable one. Despite that reservation, I most definitely applaud what he has achieved.  –   Ann Ronald

Also available by Jason Matthews: The Big Bang, Notes from Looking Within.

Ann Ronald is a retired English professor from the University of Nevada, Reno. Author of dozens of reviews, she’s also written a number of books about the American West. They include literary studies such as The New West of Edward Abby and Reader of the Purple Sage, cultural studies such as GhostWest and Oh, Give Me a Home, and nature writing such as Earthtones: A Nevada Album. Her latest is a work of fiction, Friendly Fallout 1953. Since retiring, she’s been reading vociferously, so “Bookin’ With Sunny” is giving her a wonderful opportunity to share thoughts about her favorite new discoveries.
More from this reviewer
PrevWild Blueberries
Radio GirlsNext