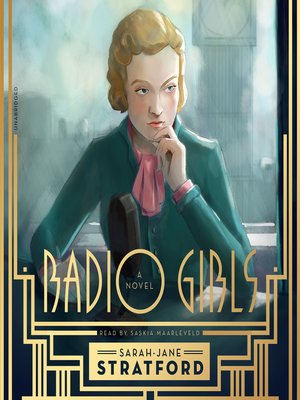 RADIO GIRLS and the early days of the BBC

Sarah-Jane Stratford blends facts with fiction in Radio Girls, a novel describing the earliest days of the British Broadcasting Company (years before it became BBC, a Corporation).  At first, the male employees were engineers tasked with keeping the newly-invented wireless machinery running, while the “girls” saw to the less technical work, the radio programming and the actual microphone work. Radio Girls follows the careers of two “girls,” one a real-life 1920s BBC employee who was a force to be reckoned with, the other a fictional novice seeking temporary work until romance hopefully will lead to marriage.

Hilda Matheson, for a time, actually was the BBC Director of Talks, responsible for innovative programming that encouraged informal and conversational presentations rather than terse bulletins and windy lectures. In her role, she invited intellectuals to come and chat, and she encouraged controversial subject matter. An avowed liberal in a sea of conservatives, she enthusiastically battled anyone who questioned her decisions. Hilda was a worldly woman, too, an MI5 operative during World War I with an array of powerful British contacts. In many ways, her presence set the BBC well on the path to innovative and timely broadcasting, though her successes didn’t come easily.

The fictional Maisie Musgrave comes to the BBC as an innocent, untrained, unworldly naïf. The longer she works there, and the more she watches Hilda in action, the more Maisie matures. Ultimately, she takes responsibility for programming, too. Stratford creates a perfect foil, someone to reflect the pre-eminence of Hilda and an imagined character who changes from a “girl” to a self-confident woman as the novel progresses. Maisie’s presence also allows Stratford to express the sexism of the times, and to show the difficulties British women faced both personally and professionally in the years between the two world wars.

Radio Girls spans the years between 1926 and 1932. In its pages, the reader confronts a number of historic events and a host of historic figures. Radio was still in its fledgling days, so it is intriguing to see how the BBC employees addressed controversial issues and over-sized personalities.  For example, there is the question of women’s suffrage. How to show female listeners the value of their votes, while at the same time not alienating men who may be threatened? Nazism generates programming disagreements, too, as the British watch Hitler’s rise from afar with varying reactions. The 1929 American stock market crash is also featured in Radio Girls, another reportorial balancing act.

Hilda relishes such contentious conversations, but she intends to focus the Talks on the arts as well. While Lady Astor was a frequent contributor about women’s issues, Hilda simultaneously invites talks by E.M. Forster, Virginia Woolf, H.G. Wells, Rebecca West. Part of Vita Sackville-West’s inner circle, Hilda gave radio access to such diverse figures as John Maynard Keynes and George Bernard Shaw. Her programming was not always popular with the BBC executives, so Hilda’s struggles form a crucial ingredient of Radio Girls, just as her insubordination did in real life.

As I often write in “Bookin’ with Sunny,” I genuinely enjoy historical fiction.  This entry by Sarah-Jane Stratford is a welcome re-enactment of the BBC’s embryonic years. Radio Girls not only brings the BBC’s inception to life but also reflects a unique segment of British life between the two world wars. Anyone fascinated by this period of time, whether fact or fiction, will quite like Stratford’s novel. I highly recommend it.   –  Ann Ronald

Available from Sarah-Jane Stratford: The Moonlight Brigade; The Midnight Guardian; and in February 2020: Red Letter Days 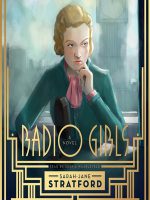 Ann Ronald is a retired English professor from the University of Nevada, Reno. Author of dozens of reviews, she’s also written a number of books about the American West. They include literary studies such as The New West of Edward Abby and Reader of the Purple Sage, cultural studies such as GhostWest and Oh, Give Me a Home, and nature writing such as Earthtones: A Nevada Album. Her latest is a work of fiction, Friendly Fallout 1953. Since retiring, she’s been reading vociferously, so “Bookin’ With Sunny” is giving her a wonderful opportunity to share thoughts about her favorite new discoveries.
More from this reviewer
PrevRed Sparrow – Place of Treason – The Kremlin’s Candidate
The Hiding PlaceNext