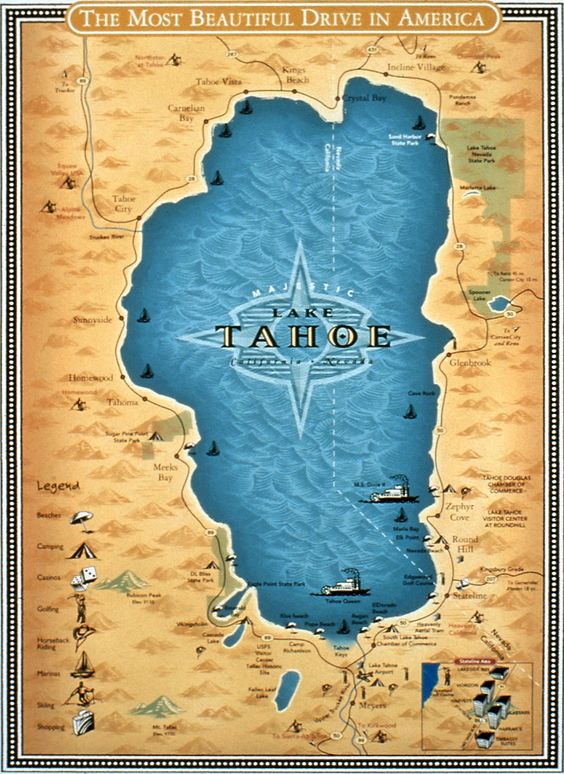 Todd Borg, a resident of South Lake Tahoe, is the author of the award-winning Owen McKenna Mysteries, or as we know them, the Tahoe….. with thirteen titles that follow.

In this case, Tahoe Dark makes number fourteen. So what makes me come back for more? I first ran across the series while working at Bonanza Books in Walnut Creek and Clayton Books in northern California. I wasn’t a big mystery fan, but these books flew off the shelves and by the time I retired to Reno, I was a convert. I love Owen McKenna, his Harlequin Great Dane Spot, his girlfriend Street, who loves McKenna and bugs, and most of all I love the Tahoe settings.

Every time McKenna travels over the Kingsbury Grade, or comes down past Spooner Lake, or goes after a bad guy on snowshoes near Mt. Tallac, my heart beats a little faster. Borg’s Tahoe is exciting, often dark and enlightening, peaceful and violent, all at the same time. How could anybody not love a story that takes place in one of the most beautiful locations in the world, even if the subject is murder and mayhem? The landscape itself is what always brings me back. Tahoe has been a part of my life since I was a kid, even before my folks bought a cabin in 1949.

Old Stella Johnson’s house, where the pavement stopped, is still there, but the road is now paved all the way past the cabin we once owned, even past the old graveyard where we’d walk around at night to scare ourselves silly and where the big attraction was the little gravestone of Stella Johnson’s granddaughter, protected by a white picket fence from nosy folk like us.

Just the mention of Johnson Boulevard was enough to put me back on the dusty road we’d trek, all three of us kids carrying our towels and buckets and shovels on our way to the beach across the highway. How can a street name bring back so many summer days? Stella Johnson never liked us kids riding our bikes, zipping all over; after all, she owned most of the property up and down that road. She even owned the Lazy J Stables located at Hwy. 50 and Johnson Boulevard. Those horses were hauled by truck from more property she owned in Nevada’s Carson Valley. To a kid, she was a rich, scary lady.

Bijou was never part of a chic Lake Tahoe, often the scene of many Borg mysteries. It wasn’t exclusive. Not many rich estates along our Bijou beaches. Not like some of the McKenna mystery settings. We had friends who summered at Marla Bay, others in even more exclusive environs, but Bijou was, well, Bijou. Whenever Owen McKenna parks his Jeep in some big casino parking lot, I remember when there were no big casino parking lots. Harvey’s Wagon Wheel was on one side of the street and Sahati’s Stateline Country Club & Casino on the other. You’d park your car right on the street! And we kids could play the penny slots. Not much mystery or mayhem then, except between the covers of Agatha Christie, Victoria Holt and Ellery Queen, standard summer reading in the 1950s. All the really big-time bad guys, “gangsters,” were over at Cal-Neva at Tahoe City. Later, Frank Sinatra’s name was in the paper a lot. But I was a kid and what did I care?

Eventually, Highway 50 would become a four-lane highway into Tahoe. Bijou was still Bijou, but traffic lights were coming in and Johnson Boulevard got paved. And then one summer day in peaceful Bijou, in broad daylight, there was a drive-by shooting at the Beverly Lodge. The victim, who owned the motel and had a questionable background, was shot dead. It was less than a mile from our cabin. The bad guys were no longer only at Cal-Neva. That event was a bellwether for me. As sure as I knew the early evening Sierra wind would come whipping through the pines, I knew something had changed. By the time Bijou became South Lake Tahoe, I was away at college. Then all three of us kids were married, spending less time at the Lake.

And then sometime in the 1970s my folks sold the Johnson Boulevard cabin and bought a real house at Tahoe Keys. Oh, you could look out every day past the Keys, up at glacier-filled Mt. Tallac, but the only difference between a Bay Area neighborhood and the Keys were sidewalks. It’s all relative though, and my kids love their Tahoe Keys memories.

But my Tahoe youth is still there on unpaved Johnson Boulevard, on two acres of scrawny and not-so-scrawny pines with room enough to hide from siblings and parents, room enough to build a tree fort, and far enough away from the hustle bustle that even murder was out of reach.   – Sunny Solomon