Home » This 'N That » Poetry – not an elitist art form 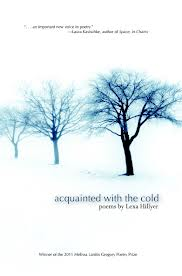 Poetry – not an elitist art form

Today, while at the South Lake Tahoe farmers market, I met Kim Wyatt, whose Bona Fide Books published a book we reviewed a few weeks ago, Why I Farm. I was interested in meeting Kim because Bona Fide Books also publishes poetry, which Bookin’ with Sunny, although a general readership review site, stubbornly continues to review. Kim offered me the chance to review another recent Bona Fide title, Acquainted With the Cold, a collection of poems by Lexa Hillyer. Hillyer is a Brooklyn poet and winner of Bona Fide’s 2011 Melissa Lanitis Gregory Poetry Prize. The book is also ForeWord Reviews 2012 Gold Winner in Poetry. In my mind I intended to pass the book on to Joanne Mallari, our primary poetry reviewer, but reading the next book in line before handing it over to the assigned reviewer has become my own form of procrastination. I wasted no time when I got back to my brother’s place at Tahoe Keys. Found a spot of shade and a canvas chair, and with a near-snowless Tallac at my back, I sat down and opened Hillyer’s book.

Acquainted With the Cold is exactly why I am nuts about poetry. I don’t like to critique poetry, but oh, brother, I can talk about it, and that’s what this book calls for: talking about. Folks who have been early on turned off to poetry by a clueless elementary or high school teacher will hate this book. They can take almost any one of Hillyer’s poems and say, “Okay, but what the heck does it mean?” I would refer them back to the beginning of Hillyer’s book, which is a quote from Chekhov’s Three Sisters: “Meaning? . . . . Here it’s snowing. What meaning is there in that?” Life has never been clear to me, so I understood that quote as a clue to what I was about to read. Yes, I thought to myself, another poet with a sense of humor, we’re going to get along just fine!

A writer can tell a reader exactly what she means by being explicit. Such as, “When you are asleep and the door opens just slightly, a streak of light appears.” But when the poet Hillyer says it, it comes out like this, from the poem “Bedroom”: Lightning. The door cracks /a harsh florescent sliver./ The poem continues: The definite nudges the indefinite: soft sound/ of breath in the dark, of birds quaking./ Now I’m hooked. The potential of language to move a reader not only in the direction intended by the poet, but the direction of the reader herself, just waiting to be nudged, is something special. For the poet, the sliver of light brings her to the sound of loons and the wind that blows drifting sand into a ridge of sand. For me, the reader, that sliver of light is recurringly seen in my childhood as a flight down basement stairs with a bear in pursuit. The indefinite I believe is easily moved by the definite.

Often people who claim to not like poetry, do enjoy word games, or plays on words. I would encourage those readers to bypass “meaning” – yes, I know it’s hard to do, and continue reading Hillyer’s poems as she is constantly and seriously playing with words. Case in point: “Boy Hugging an Apple Tree.” Now, without getting into the “meaning” of this poem, here’s what we have: a boy named Leggo hugging an apple tree; an apple orchard that has become a soccer field; two people (lovers?) drinking cabernet and arguing, confessing and no doubt, some kissing. The orchard is childless and silent/our first confessions buoy/bluely as we slip/through the day drinking cabernet./ Is the orchard really empty? Let’s say it is, then might not their confessions of being childless rise and float (buoy/boy) sadly (bluely) to the surface? The rhyme of through the day drinking cabernet is not hard to miss. The poet then speaks of the apples, those ripe and not ripe. She identifies them as Winesaps and then mentions Empire apples, As for Empires – every one of them has fallen. We can assume more than apples have fallen. Then something is moving: somewhere an echo/a boy named Leggo clings to a tree,/his round cheek pressed to the bark/or perhaps his father’s calling: let go, let go, but oh/he will not. I Googled “Leggo” and in today’s parlance it’s defined as “let go” (Wordnik) or “let’s go” (Urban Dictionary). I must say, the Urban Dictionary’s definition doesn’t fit, but their opinionated take on the word was worth every extra minute it took to check them out.

If you have actually read all the way through this piece, please understand it was not written as a book review. I will give the book to Joanne and she will write a formal review, but the blog is exactly what I would say to a customer, if I were still working in a bookstore, who might linger for a moment at a face-out copy of Acquainted With the Cold. Hillyer’s poetry is powerfully beautiful and evocative. In her poem “The Life of the Foxes at Skinners Falls,” she likens a fox to a Vespa, dash in the semi-dark. What a perfect parallel. That poem ends with it’s not catching the fox but sensing it that matters: something is/scurrying out there.