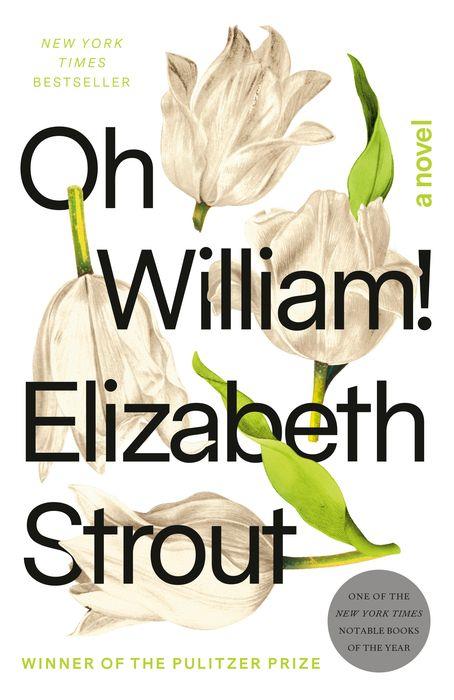 Oh William! – Strout’s Lucy Barton is back in a stand-alone novel of depth and texture, drawing the reader into a compelling story of past and present.

When Sunny asked me to review Elizabeth Strout’s novel, Oh William! I wondered “why me?” I haven’t read Strout’s two other books in her Amgash series, My Name is Lucy Barton and Anything Is Possible, so I would be coming to Oh William! with no prior knowledge of Lucy and her companions and what had previously occurred in their lives. I found that didn’t matter. Oh William! wholly succeeds as a stand-alone novel. It includes references to the other books that add texture to its story, but it also draws the reader into the here and now in utterly compelling ways.

What I treasured in Oh William! is the point of view. Lucy Barton narrates her relationship with her ex-husband like any one of us might muse and speculate about past mistakes and misunderstandings. Her mind stutters back and forth between events. One exchange reminds her of another, and another, and another. Early in Oh William!, writing about a party she once attended, Lucy’s reverie perfectly captures her unique voice, her manner of flitting among subjects and objects. “The apartment was filled with people, although not as many as I might have thought, but it makes me nervous, that kind of thing. You start a conversation with one person and another person comes along and you have to interrupt yourself, and then you see their eyes looking around the room as you talk—you know how it is.”

Lucy hesitates, backtracks, stumbles forward, gazes around the room too. And yes, the reader knows exactly how it is. It is the design of Strout’s entire novel, itself designed to unearth the past while interring the present in fits and starts. Lucy and William divorced years ago. He remarried two more times; both wives left him for much the same reason as Lucy did. He is an interior man, impossible to penetrate when he turns inside himself. After their divorce, Lucy remarried too. Her second marriage was a happy one, but when her husband died of cancer she found her life empty and at sea. Now William has asked for her help. On an ancestry website he has learned of a half-sister he never knew existed. He’d like to find Lois Bubar and unearth his mother’s mystery and her mysterious past.

As Lucy and William investigate, she interiorly investigates her own relationship with William. So, there is a duality operating in this novel, a duality in Lucy’s own imagination as well as a duality (and duplicity) in William’s mother’s life. Moreover, there is a layered examination of relationships—marital, post-divorce, parent and child. The reader meets Lucy and William’s adult daughters, so that adds another complexity to the equation. And Lucy learns that William’s own mother’s history is rather like her own, something she never knew before. I loved the unlayering that goes on in this very impressive novel. It doesn’t hit the reader over the head with a sledgehammer. Rather, it stammers forward, much like real life.

I think readers unfamiliar with Strout’s previous two Amgash books will enjoy this one without any foreknowledge. The artistry alone makes Oh William! powerful, the way Lucy’s very words echo the passage of the past and present. The hesitations, the leaps forward, the pauses, the deep breaths, the sighs, the comprehensions and the utter incomprehensibility. I’m very glad I followed Sunny’s suggestion and read Oh William! Because I found it so effective and affecting in and of itself, I’m not sure I ever need to go back and read its two predecessors.

Also available by Elizabeth Strout: Olive, Again; Anything is Possible; My Name is Lucy Barton, The Burgess Boys; Olive Kitteridge; Abide with Me; Amy and Isabelle.

Ann Ronald is a retired English professor from the University of Nevada, Reno. Author of dozens of reviews, she’s also written a number of books about the American West. They include literary studies such as The New West of Edward Abby and Reader of the Purple Sage, cultural studies such as GhostWest and Oh, Give Me a Home, and nature writing such as Earthtones: A Nevada Album. Her latest is a work of fiction, Friendly Fallout 1953. Since retiring, she’s been reading vociferously, so “Bookin’ With Sunny” is giving her a wonderful opportunity to share thoughts about her favorite new discoveries.
More from this reviewer
PrevThe Decent Inn of Death
These Precious DaysNext