Home » Reviews » Memoir » Off The Sidelines 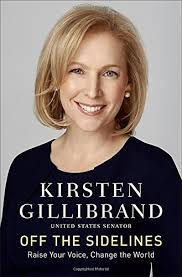 Off the Sidelines: Raise Your Voice, Change the World

Because I am a bit of a political junkie, I often read biographies and autobiographies of political figures.  Generally I choose books about men and women I admire, but occasionally I select a book about someone unfamiliar. Such was the case when I picked up Off the Sidelines by Kirsten Gillibrand, United States Senator from the state of New York.  She has been in the news lately, with her relentless campaign to change the way the military treats sexual assault cases and her explicit commitment to share the stories of those affected by the current policies and practices. Before that, she shepherded the bill that provided additional health care for 9/11 first-responders.  Sympathetic to her priorities and admiring her fortitude, I wanted to learn more about her.

Off the Sidelines did not disappoint.  Written in a chatty, informal fashion and filled with anecdotes about herself and about her constituents, the book sounds like a real person talking. Gillibrand moves smoothly through a variety of topics, weaving stories of her own family and the real-life experiences of others into a thoughtful discussion of issues and processes.  Born into a family of strong women heavily involved in politics and public service, she followed their lead.  Her grandmother controlled the New York State’s legislative secretarial pool and was always in the middle of the action.  Her mother was a lawyer, a role model who juggled career and motherhood with deftness and grace.  At an early age, Gillibrand learned the power of women when they band together.

Thus Off the Sidelines is much more than straight autobiography.  It is a call to women, specifically, to get involved in public service.   She credits Hillary Clinton, highlighting a Clinton quote that inspired Gillibrand enormously.  “Decisions are being made every day in Washington, and if you are not part of those decisions, you’ll have no one to blame but yourself.”  Gillibrand began as a fundraiser, making multiple contacts and building friendships in New York’s Democratic party.  Then, she ran for Congress.  And won.  In 2008, Governor David Paterson appointed her to Hillary Clinton’s vacant senate seat.  Gillibrand won the subsequent special election, and now has been re-elected.  All this, while negotiating a commuter marriage and raising two small boys.

She has a lot to say, in fact, about the travails of mingling a demanding career with a rewarding family life.  She hopes, by example, to encourage other women to run for office and get equally involved.  She also voices concerns about women of every age and every social stripe, believing that if more women participated in the democratic process, then legislative action would be more favorable for women’s issues.  Gillibrand particularly cares about family concerns—childcare, aging parents, illness, career patterns and economic equality.  As I read, I found myself liking Gillibrand more and more.  She unabashedly cares.

She also listens.  The pages of Off the Sidelines are filled with vignettes about other people.  As I said at the outset, reading Gillibrand’s words is like sitting down with an old friend, drinking a cup of tea perhaps, trading stories, and plotting how to make things work.  I’d vote for her for sure.  Meanwhile, I urge all women interested in politics to read Gillibrand’s book, Off the Sidelines, a primer for female political success.    – Ann Ronald 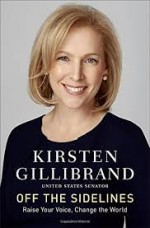 Ann Ronald is a retired English professor from the University of Nevada, Reno. Author of dozens of reviews, she’s also written a number of books about the American West. They include literary studies such as The New West of Edward Abby and Reader of the Purple Sage, cultural studies such as GhostWest and Oh, Give Me a Home, and nature writing such as Earthtones: A Nevada Album. Her latest is a work of fiction, Friendly Fallout 1953. Since retiring, she’s been reading vociferously, so “Bookin’ With Sunny” is giving her a wonderful opportunity to share thoughts about her favorite new discoveries.
More from this reviewer
PrevWhen Books Went to War
Elizabeth of YorkNext