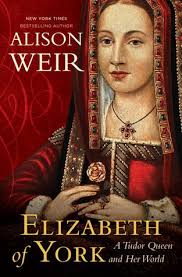 Elizabeth of York: A Tudor Queen and Her World

Alison Weir, author of fourteen books on Medieval and Renaissance Britain, has now written about nearly every notable English queen from 1150 to 1600.  This biography of Elizabeth of York, queen to the first Tudor king, Henry VII, is wonderfully conceived and elegantly written.  I have long respected Weir’s histories and have assigned one or another of them to my classes for years.

Weir does not portray Elizabeth of York as larger than life as she did Eleanor of Aquitaine, Mary Queen of Scotts, and Elizabeth I for the simple reason that her personality was not outsized.  Charisma was not her M.O.  Attitude was not her thing.  She did not set her sons against her husband and king, as did Eleanor.  She did not foment rebellion against her royal cousin, as did MQS.  She did not rule in her own right, defy the Spanish Armada, or give her name to an Age, as did Good Queen Bess.  Still, she was vitally important to her times and to the Tudors who revered her as wife, mother and grandmother.

Although numerous primary sources survive from the late fifteenth century (Elizabeth lived from 1466-1503), Weir is nevertheless challenged to create a narrative centered on Elizabeth’s life.  She made no speeches, called no parliaments, wrote no books, fought no battles, and conquered no territory.  Altogether she was the dutiful, well-educated eldest child of Edward IV.  She grew into a comely, agreeable young woman.  She married Henry Tudor, gave him loyalty, and provided him with a direct claim to the crown he had conquered.  In addition, she bore him a slew of children, the last of which killed her on her thirty-seventh birthday.

What Weir presents us with is not a fully realized personality-driven biography, but it is a biography that explores as much of Elizabeth’s personality as is possible.  More importantly, Weir helps us understand why Elizabeth was so indirectly influential even if she was mostly a conventional queen—reproductive, submissive, and loyal—in a male dominated, violent era.

Weir rightfully emphasizes the extent to which Royal girls and women were universally vulnerable—actual pawns—in British history.  Never was this truer than in the 15th century when England was wracked with monarchical weakness and civil war.  Elizabeth saw her father lose and then regain his crown when she was five.  In her early teens, her father had her uncle George, Duke of Clarence, executed by drowning in a cask of malmsey.  Following her father’s premature death, her two brothers—the Princes in the Tower—disappeared into the Tower never to re-emerge.  At the age of sixteen, her other uncle, the Duke of Gloucester, seized the  crown of England becoming Richard III.  Following the death of his wife Anne, Richard asked for a papal dispensation to marry Elizabeth, his niece.   Following Bosworth in 1485 and the death of Richard the last Plantagenet king, Elizabeth, the person mostly directly in line to the throne, found herself wooed and won by Henry Tudor who now claimed to be king by right of lineage but actually was by right of conquest.

Over the next fifteen years, Elizabeth would see her newly found security threatened by two different young men both pretending to be her younger brother Richard .  A third rebel emerged as well.  Two of the three were executed in 1499 so that the royal marriage of her son Arthur and Catherine, Spanish Infanta, could proceed after ten years of negotiation.  Through it all she seemed to be regal and composed.

It was a brutal, bloody time.  The stakes were high for those who would be king.   Through Elizabeth and her marriage to Henry VII, the amalgamation of the red and white roses became the symbol of a more stable age.   – Neal Ferguson

Roses are red.
Roses are white.
Tudors mixed them
To men’s delight!
(Or so they write.)      – Neal Ferguson

Also available by Alison Weir: The Six Wives o f Henry VII; Innocent Traitor; The Life of Elizabeth I; The Lady Elizabeth; Eleanor of Aquitaine; Britain’s Royal Families; A Dangerous Inheritance; Henry VIII, King & Court; The Lady in the Tower: The Fall of Anne Boleyn; The Marriage Game; Katherine Swynford: The Story of John of Gaunt and his Scandalous Duchess; The Children of Henry VIII; Captive Queen: A Novel of Eleanor of Aquitaine; The Princes I the Tower; Mary, Queen of Scots, and the Murder of Lord Darnley; Mary Boleyn: The Great and Infamous Whore; Mistress of the Monarchy: The Life of Katherine Swynford, Duchess of Lancaster; Children of England; Traitors of the Towers; Isabella: She-wolf of France, Queen of England; Richard III and the Princes inn the Tower; Bear’s Big Blue House; Heloise; The Eagle and the Lion. 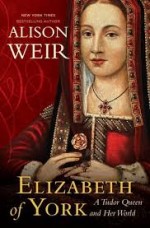 Neal Ferguson is a self described Anglo-phile. After studying for a PhD in British history and doing research for a year in various British archives, he came to the University of Nevada in 1970 to teach. Soon he found himself in administration where he remained until 2003. After returning to full-time teaching a decade ago, he decided to concentrate his teaching energies on Medieval British history and various global aspects of World War II. Dedicated to Ambrose Bierce’s proclamation that the purpose of war is to teach Americans geography, Neal insists that his students accompany him (in class) to sundry east European rivers and steppes, African deserts and jungles, south-east Asian mountain ranges and peninsulas, and small islands and coral reefs in the Pacific. Currently he is writing a book about the ups and downs of General Douglas MacArthur’s military reputation.
More from this reviewer
PrevOff The Sidelines
Death in Nostalgia CityNext