Now You See It, Now You Don’t, Slade House 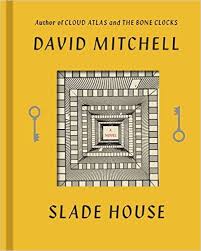 It’s not often that I review a book two months before its publication, but because David Mitchell is one of my favorite novelists I tore into Slade House, in spite of the fact it is about a haunted house. I’m not a fan of anything scary: movies, novels, and especially haunted houses, but I love Slade House.

Now the trick is to convince you to the merits of Mitchell’s haunted house book. Slade House is a mansion, real enough in the novel, but real also in the Blitz of World War II when it was bombed to smithereens. The novel opens decades later, in 1979, when a divorced pianist and her young teenage son are formally invited to a musical soiree to be held by Lady Grayer, the present owner of Slade House. You mean it was rebuilt? Not quite. Rita and her son Nathan are the first of five visitors, each visit taking place at nine-year intervals.

The mansion, for all its magnificence, is situated in a most unlikely neighborhood on Slade Alley, a rundown neighborhood with little to commend it. All those “invited” to visit Slade House must first find a small, well-hidden, black iron door, a door without handle or keyhole. I will tell you right off that almost no one who makes it through that iron door will ever be seen again.

That being said, it is Mitchell’s magic with words that compels the reader to continue. Those familiar with his writing will recognize his deft handling of time – present, past and everything in between. He drops clues like leaves falling from trees in the always-changing, never quite the same, lush gardens of Slade House.

Exactly who are Lady Nora Grayer and her brother Jonah? What do they want from those who come? Once the mystery of Slade House is public knowledge, why would anyone be so recklessly curious as to look for that small, black iron door? And, after all, who’s to say that the road less traveled is always of our own choosing?

Great fun exists in the recurring words that are part and parcel of Mitchell’s tale, words like: Lacuna, orison, engifted, aperture, Banjax, glyph, Horologist, Operandi, Atemporals — the list goes on. The five hauntings at nine-year intervals (1979, 1988, 1997, 2006, 2015) artfully carry the reader into each and every event. What we learn about what happens in 1979, if we read carefully, moves us into 1988, and so on, each building on our understanding of what is really happening. The narrative structure is downright masterful. The characters, too, build on each other, directly and indirectly; they are not stock ghost story figures, but people to care about, people with recognizable human frailties. They are desirable and even devoured souls.

How willing we are to believe what we need to believe, to think the impossible quite likely, despite all the while knowing this cannot be happening, is what makes Mitchell’s haunted house story so deliciously unique. Nobody can warp time and words with such finesse. You, unlike his characters, will not require an invitation. Slade House, Mitchell’s small yellow book, needs no invitation, no key: pick it up, open it, take a deep breath, you’re in. – Sunny Solomon 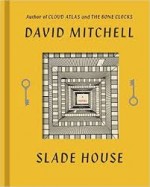 Sunny Solomon holds an MA in English/Creative Writing, San Francisco State University. She is a book reviewer for “The Clayton Pioneer” and her poetry and other writing has been published in literary journals, one chapbook, In the Company of Hope and the collection, Six Poets Sixty-six Poems. She was the happy manager of Bonanza Books, Clayton, CA and Clayton Books, Clayton, CA. She continues to moderate a thriving book club that survived the closure of the store from which it began. Sunny currently lives next to the Truckee in Reno, NV.
More from this reviewer
PrevDeadbeat Dams
Oscar Wilde and a Death of No ImportanceNext