I have just finished reading David Mitchell‘s The Thousand Autumns of Jacob de Zoet and I am numb. What or who to extol first: story or author? The Thousand Autumns of Jacob de Zoet is not a counting of seasons, or it would be a story about the oldest man to ever live. The “thousand autumns” is but one of the “florid names” the Japanese “give to their kingdom . . .” This is the story of a young Dutchman who has made a rash, but heartfelt promise to the father of the girl he hopes to marry. He may have the hand of his beloved on the condition that he completes a five-year tenure with the Dutch East Indies Company, headquartered in Batavia, Java. From this employment, as a clerk to an officer of the company, Jacob, the orphaned nephew of a Dutch minister, can expect to return with enough money to satisfy his future father-in-law. Jacob leaves Holland with a family Psalter, a gift from his reverend uncle, who tells him “It is a gift from your ancestors……never forget this Psalter.….this is your passport home.”

The story takes place in Japan and its port city of Nagasaki. In 1799, when Jacob arrives, Japan is an isolated nation of shoguns and monks, magistrates, and tyrants; the Jesuits are gone and Christianity, with all its accouterments, is forbidden. When the Dutch ship Shenandoah moors at Dejima, a floating dockyard connected by a bridge to Nagasaki, Jacob is careful to keep his treasured Psalter hidden from the ever-present prying Japanese interpreters and spies. This historical novel is steeped in the realities of what it was like to conduct business between two very different, but strangely similar worlds. For every corrupt Japanese port official, there is a counterpart in the employ of the Dutch East Indies Company. Bribery is matched with thievery, lies with cruelty.

Jacob’s promise to be faithful to his fiancée is sorely tested when he meets a young Japanese midwife studying under the tutelage of a Dutch physician training Japanese students in Western medicine. Orito Aibagawa is connected to the local magistrate’s household. Half of Orito’s face is disfigured from a burn, but from their first brief meeting, the possibility of more than friendship arises. Amid all the corruption that makes up life in Nagasaki and Dejima, Jacob’s feelings for Orito become the cause of her removal from the city, and what lies ahead for both is shocking and heartbreaking.

Mitchell’s writing is even-handed in his description of Japanese life in 1799. The corruption of the East is no more despicable than that of the West. It is Jacob, not Japan, who, by the goodness of his nature, is truly isolated. Mitchell is unflinching in laying out the entire story, which does not end until Jacob’s death as a very old man back in Holland. The Thousand Autumns of Jacob de Zoet is a fiercely satisfying novel of politics, business, treachery, and ultimately the power of love to make a kind of sense out of the lives we live.

I would also note that at the end of the novel, the publisher has wisely included Mitchell’s essay On Historical Fiction. “Identifying the origins of any genre is a murky business . . .” and so begins one of the neatest descriptions of historical fiction I’ve read. Mitchell’s essay is a sure-fire enticement to get the most uncommitted reader onto the historical fiction bandwagon. And a second nod to the publishers for its cover of the trade copy…………….finally a cover that doesn’t shout ROMANCE! The Thousand Autumns of Jacob de Zoet is a book for any reader, male or female, who appreciates good writing and a strong story.   – Sunny Solomon 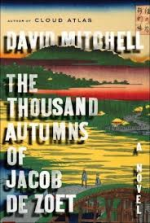 Sunny Solomon holds an MA in English/Creative Writing, San Francisco State University. She is a book reviewer for “The Clayton Pioneer” and her poetry and other writing has been published in literary journals, one chapbook, In the Company of Hope and the collection, Six Poets Sixty-six Poems. She was the happy manager of Bonanza Books, Clayton, CA and Clayton Books, Clayton, CA. She continues to moderate a thriving book club that survived the closure of the store from which it began. Sunny currently lives next to the Truckee in Reno, NV.
More from this reviewer
PrevElseplace
Almost SomewhereNext