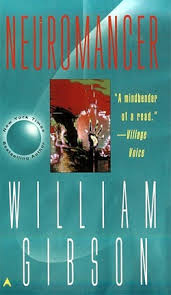 It’s been 30 years since the first publication of Neuromancer, the essential cyberpunk novel. A jaundiced response to the 1980’s “morning in America,” cyberpunk is a bastard child of science fiction. It poses a near-future society where Asian and American countercultures are oddly fused. Drugs and elective surgeries promise an interface between human and machine. The ambiance is strictly Film Noir with brightly colored lights shining directly into your eyes.

The characters in William Gibson’s Neuromancer inhabit a demimonde of corporate hacking and low level espionage. Gibson has said that an early draft of Neuromancer was full of “fairly hysterical free association, steamy character description, and nothing in the way of, well, narrative.” I have to say that the published version of Neuromancer is a lot like that too, but that’s not a criticism. So what’s the story about? Well, one clue is in the title. Neuromancer is a play on necromancer, a magician or wizard. Say it aloud a couple of times. It almost sounds like “new romancer,” doesn’t it? I suggest that once you set aside all the postmodern ambiance, Neuromancer is at heart a traditional good guys vs. bad guys action piece.

Neuromancer has some fine SF action writing:  “She pressed her tongue hard against her lower front teeth. One moved slightly activating her microchannel amps, the random bounce of protons through the darkness was converted to a pulse of electrons.” This is the good stuff, folks. I can almost hear Gibson reciting these words in his characteristic Vancouver drawl.

Like most speculative fiction, Neuromancer shows its age in places. There’s a gangster character described as a “rastafarian.” He speaks in a kind of jive street lingo and goes around calling everyone “mon.” Sorry, but this guy is strictly 20th century. His presence dates the book to a degree, but doesn’t slow down the breakneck narrative. It’s still an exciting read, and Neuromancer has never been out of print since its first publication in that Orwellian year, 1984.

My favorite cyberpunk writings are the Marid Audran stories of George Alec Effinger (1947-2002). These are set in the Budayeen, a kind of mixed-up culture you might find if Las Vegas and New Orleans were somehow fused and placed in the middle of Saudi Arabia. Vividly written, these stories were gathered into the author’s memorial collection, Budayeen Nights (2003).

The cyberpunk movement spawned a deformed stepchild known as Steampunk. Gibson and Sterling pioneered this in their 1991 novel The Difference Engine. Other authors who have signed on to Steampunk are Tim Powers and James P. Blaylock. The premise here is that 20th and 21st century inventions were actually possible with predigital, strictly analog technology in the 19th century. Curiously, the arena for steampunk has shifted away from literature. It has gone viral as both a visual art form and a retro lifestyle. Just Google steampunk, and look at the astounding pictures you’ll find there.   – Dan Erwine

Dan Erwine holds a BS in Telecommunications, San Diego State University. Dan recently retired after four decades in radio broadcasting. His background San Diego stations KFSD and NPR's KPBS, and KUNR, Reno, NV. Over the years, Dan has produced and hosted a number of talk shows and interviewed over five thousand writers in almost every genre and career, from such notables as David Brin to Seamus Heaney, Allen Ginsberg, Judy Collins, Charlton Heston and Wally Schirra. Dan is a comic book aficionado and has a special interest in film, science fiction and mystery. He lives with his wife in Reno, NV.
More from this reviewer
PrevFlappers
The Thirteenth TaleNext