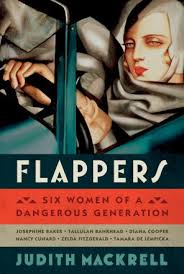 Flappers: Six Women in Search of a Dangerous Generation

Judith Mackrell, author of Flappers, presents a wealth of meticulous research in lively, vivacious prose. She traces the follies and fortunes of six precocious young women as they navigated the shoals of the 1920s. Together, the six epitomize what we recognize as “flappers.” Mackrell describes them as “intriguingly poised between woman and child,” then follows their respective evolutions into adulthood. In alternating chapters with overlapping lovers and acquaintances, we meet these “brave and gay and beautiful” flappers and their friends.

Some are famous, while others were unknown to me. Josephine Baker transitioned from a St. Louis ghetto to Paris stardom. A virtuoso dancer, she combined exotic, sexually explicit moves with artistic gyrations never before seen in Europe. Husky-throated Tallulah Bankhead acted on the stage and in movies, rather than danced, but she was another American in Europe who was renowned for her provocative and alluring presence. Diana Cooper, daughter of a duchess, came from a quite different background. She escaped her mother’s control by marrying precipitously and then turning to acting in order to support her preferred life style. Nancy Cunard, another English daughter of wealth, escaped in a different way, by becoming known for her fashions, her leftist leanings and, to a lesser degree, for her poetry. Zelda Fitzgerald wanted to be acknowledged as a gifted writer, too, but her husband’s Great Gatsby fame always overshadowed her own accomplishments. The last of the six was Tamara de Lempicka, who fled from Poland at the start of World War I and went on to become a successful painter of portraits, supporting her extravagant lifestyle with commissions throughout the world.

Obviously the six women had much in common. Flamboyant, wealthy and successful, worldly-wise, fueled by nicotine, alcohol and drugs, generally promiscuous with constant affairs involving both men and women, flitting back and forth between Europe and Hollywood, they made headlines and helped define the spirit of the roaring twenties. Even their later lives followed similar trajectories. As their reputations dwindled, several of their personalities disintegrated into bipolar episodes and outright madness. It was as if their youthful maniacal urges literally drove them over the edge when they aged.

Mackrell brings the six stories to life, including hundreds of intimate anecdotes amid an ongoing spate of cross referencing and name dropping. These women knew each other, partied together, often shared lovers. Because their artistry differed, they were not in direct competition with each other. Rather, all together, they were archetypes of their generation, models of excess but also early spirits of female independence. Mackrell applauds them all as emancipation forerunners, but I do wish she had done more to summarize how the six roles complemented one another. Their disparate energies often felt disconnected to me. While I was reading, I was also wondering if someone unfamiliar with Paris and Hollywood in the 1920s would be able to follow the catalogues of people and their foibles. The author might have done more to help the reader understand how these stories come together to make a point about those decadent times. More analysis and less description would have made Flappers a better book. That said, I’m glad I read it. Not only did I learn a lot, but I genuinely appreciated the ways Mackrell brought her research out of the archives and onto the streets (and into a plethora of bedrooms, too).    – Ann Ronald

Ann Ronald is a retired English professor from the University of Nevada, Reno. Author of dozens of reviews, she’s also written a number of books about the American West. They include literary studies such as The New West of Edward Abby and Reader of the Purple Sage, cultural studies such as GhostWest and Oh, Give Me a Home, and nature writing such as Earthtones: A Nevada Album. Her latest is a work of fiction, Friendly Fallout 1953. Since retiring, she’s been reading vociferously, so “Bookin’ With Sunny” is giving her a wonderful opportunity to share thoughts about her favorite new discoveries.
More from this reviewer
PrevThe Paris Wife, #2
NeuromancerNext