Home » Reviews » Nefertiti: The Book of the Dead

Nefertiti: The Book of the Dead 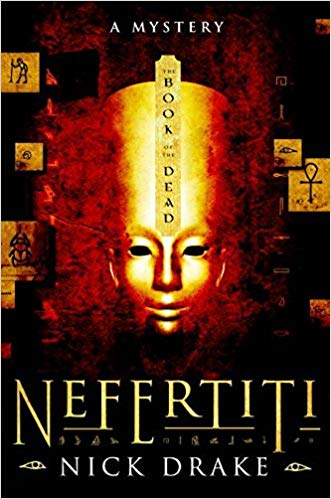 NEFERTITI: THE BOOK OF THE DEAD

Recently, I’ve noticed that contemporary authors—especially mystery and thriller writers—are publishing more and more trilogies. Perhaps that suits our present-day hectic pace and need for instant gratification. The leisure of an on-going, multi-year series takes too much reader energy and at-length concentration. I feel a little snarky with that somewhat jaded observation, so now let me give credit to the form. I’ve just finished reading Nick Drake’s current entry into the trilogy field, and it is very well done indeed.

Drake turns to ancient Egypt as the inspiration for an exciting three-book police procedural filled with historical intrigue. His detective is Rai Rahotep, a chief detective in the Thebes division of the Medjay, a young man with innovative policing methodology and imaginative insight into the criminal mind. In the first book of the trilogy, Nefertiti, Rahotep is summoned to attend the court of Akhetaten to solve some inexplicable event. When he arrives, he discovers the queen is missing. Rahotep must find her alive in ten days, or he and his family will be punished for his failure.

In truth, mystery does surround Nefertiti, who apparently vanished from history during the twelfth year of Akhetaten’s reign. New theories discredit that disappearance, however, lending credence to the notion that she remained in power for several years after that, perhaps alongside Akhetaten or perhaps as the sole monarch of Egypt under another name. Drake takes this centuries-old conundrum and assigns Rahotep to solve the mystery of what really happened to the Egyptian queen. Has she been kidnapped? Has she been killed? Or did she vanish on her own?

Rahotep cannot rely on modern forensics, but he does examine crime scenes and corpses with precision. He paces out measurements and discovers incongruities. He utilizes the library to find secret connections between the past and the present. Not every officer in the Medjay appreciates this intellectual upstart, so Rahotep must also confront jealousy and court intrigue. Thus, he uses other investigative ploys, like disguises and misdirections. When attempts on his life occur, he blesses his good luck and continues to outwit his opponents.

Does Rahotep prevail? Does he find the beautiful, ephemeral Egyptian queen? You’ll have to read Nefertiti, subtitled “The Book of the Dead,” in order to solve the riddle at the heart of this eternal mystery.

Its pages will reveal an Egypt alive with sun and sand. Those same pages bring the scenery to life, the temples, the villas, and the nearby tombs. Explicit comparisons between royal life, artisan work assignments, and slum-dweller subsistence are pictured in some detail. Like a Russian novel, so too does this one contain innumerable complicated Egyptian names. This adds to the air of authenticity, however, so the reader comes away with a historical awareness that feels accurate and as true as the imagination can make it. Two more Nick Drake novels follow Nefertiti. The second book in the trilogy is Tutankhamun (the next monarch in line), and subtitled “The Book of Shadows.” The third, Egypt, is subtitled “The Book of Chaos.” Apparently, both of these historical thrillers draw Rahotep even deeper into further bureaucratic corruption and palatial intrigue. Anyone who enjoys trilogies ought to read all three.   –  Ann Ronald

Also available by Nick Drake: Tutankhamun; Egypt, The Book of Chaos; Remembered for a While; All the Angels; From the Word Go; The Man in the White Suit; The Farewell Glacier. 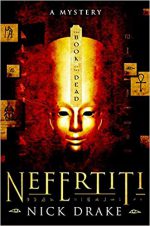 Ann Ronald is a retired English professor from the University of Nevada, Reno. Author of dozens of reviews, she’s also written a number of books about the American West. They include literary studies such as The New West of Edward Abby and Reader of the Purple Sage, cultural studies such as GhostWest and Oh, Give Me a Home, and nature writing such as Earthtones: A Nevada Album. Her latest is a work of fiction, Friendly Fallout 1953. Since retiring, she’s been reading vociferously, so “Bookin’ With Sunny” is giving her a wonderful opportunity to share thoughts about her favorite new discoveries.
More from this reviewer
PrevMan with a Seagull on His Head
Wild BlueberriesNext