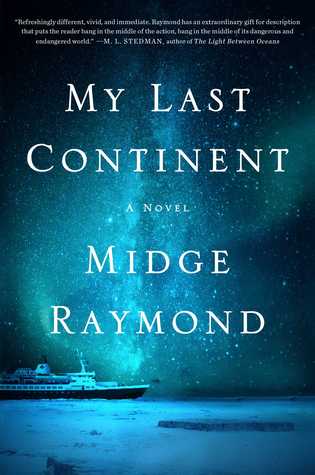 On one level Midge Raymond’s novel, My Last Continent, shadows the initial attraction and then the developing love between Deb and Keller. On another, My Last Continent highlights Antarctica, the setting for Deb and Keller’s affair and the place dearest to both of their hearts. With subtle finesse, Raymond weaves these two strands together, intertwining the couple’s personal passion with the harsh environment where they work, the penguins that they study, the ever-changing beauty and the continental degradation that they see and share from year to year.

Deb’s own life is a layered one. Although she lives in Eugene, Oregon, and teaches at the university there, her whole existence centers on Antarctica. Funded by the Antarctic Penguin Project, she goes south every year, working both as a tour guide on a cruise ship and as a researcher tracking the influence of climate change and tourism on fragile penguin habitat. Into her lonely existence comes Keller, a lawyer who has taken a menial job at McMurdo Station to escape a family tragedy that destroyed his heretofore idyllic life. As he falls in love with Deb, however, Keller increasingly falls in love with Antarctica. In fact, most of the tension-fraught episodes in My Last Continent occur because of Keller’s obsessive fascination for the land originally explored by Robert Falcon Scott, Ernest Shackleton, and Admiral Richard Byrd.

Midge Raymond portrays Deb and Keller, two isolated personalities who find sustenance in each other’s arms, with perfection. Their quirks and their foibles, their strengths and their weaknesses not only are revealed with sympathetic clarity, but are underscored by the landscape and the animals who are born, breed, and die in such harsh circumstances. My Last Continent is no ordinary love story. The reader learns about seventeen different species of penguins, their quirks and foibles, their strengths and their weaknesses, too. Understanding the emperors, the Adelies, the Weddells, the chinstraps, and all the other penguins who inhabit this novel brings deeper empathy to the struggles of Deb and Keller striving to reach balance in their lives.

My Last Continent is smart ecologically, too. As tour guides (Keller joins Deb on the M/S Cormorant, and later takes a job on the Australis, a luxury liner ill-suited for Antarctic cruising), Deb and Keller regularly make informed presentations to the visitors, leading them ashore as safely and as delicately as possible while debating the often-naïve sightseers’ observations about the animals and the ice. This facet of Raymond’s novel is as informative as her handling of the Antarctic fauna. This knowledgeable book contains much to consider and much to contemplate. It’s quite a feat, in fact, to encase such a compelling love story inside so much cogent scientific enlightenment.

There are many other authorial ingredients to praise as well. Deb narrates the entire novel, which holds Keller at an appropriate distance while she struggles to engage. As she puzzles over his behavior, the reader knows only what she experiences from year to year—a great way to develop character, I think. Another couple, Kate and Richard Archer, act as effective foils for Deb and Keller, with echoes and soundings of a similar relationship. Likewise, incidents from Deb’s past resonate with the present. In fact, Raymond has effectively designed her novel so that chapters ricochet between Deb’s upbringing, her college years, previous short-lived affairs, and even an ever-present future that clouds the passage of the book. If I have a complaint about My Last Continent, I would question an occasional plotting exuberance, but that’s a minor annoyance in a novel I honestly couldn’t put down. A one night’s read, and a good one: My Last Continent.   – Ann Ronald 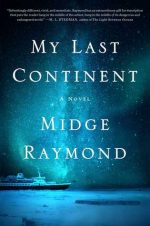 Ann Ronald is a retired English professor from the University of Nevada, Reno. Author of dozens of reviews, she’s also written a number of books about the American West. They include literary studies such as The New West of Edward Abby and Reader of the Purple Sage, cultural studies such as GhostWest and Oh, Give Me a Home, and nature writing such as Earthtones: A Nevada Album. Her latest is a work of fiction, Friendly Fallout 1953. Since retiring, she’s been reading vociferously, so “Bookin’ With Sunny” is giving her a wonderful opportunity to share thoughts about her favorite new discoveries.
More from this reviewer
PrevParis Metro
After the Shot DropsNext