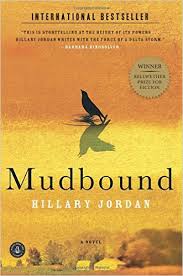 Hillary Jordan’s novel, Mudbound, carries the reader back to a 1940s Mississippi rife with hatred, prejudice, and bigotry. Since the first chapter opens with a burial, the reader knows the novel won’t end well, but only discovers the details of the racial conflict as the narrative unfolds. Through the voices of six divergent narrators, we watch two families, one white and the other black, unbalance their precarious lives.

Two of the narrators are veterans of World War II. That conflagration changed both of them irrevocably. Badly shell-shocked, Jamie wandered through Europe after the war and now has arrived at his older brother’s cotton farm. Idle and unwell, Jamie is looking for something but doesn’t know what that something might be. He befriends Ronsel, a black neighbor who experienced freedom and respect while serving heroically in Europe. Back home in Mississippi, the Southern mores of his childhood gall young Ronsel. The decorated sergeant who led a tanker battalion is expected to act like an acquiescent naïf who ‘knows his place’. Both men drown their angst in alcohol while they struggle to make sense of their respective dead-end situations.

Ronsel’s parents narrate Mudbound’s action, too. His father works on Jamie’s brother’s mudbound farm, while his mother does housework for Jamie’s sister-in-law. The two black parents voice utter dismay as they watch their son’s increasing disconnect from southern traditions and expectations. Jamie’s brother and sister-in-law, Henry and Laura, also tell their understandings of what leads to Mudbound’s climactic scenes. In some ways, Laura is the most significant voice in that she not only interacts closely with all the other characters but she also conveys the most analysis and introspection. As an outsider, she comprehends the horrors of Mississippi racial stratification. In the gendered world of the Old South, however, she must stand impotently aside when wrongs occur.

Meanwhile, the father of Henry and Jamie, Pappy, torments his daughter-in-law and his sons, all the while raining racial imperatives down on the tenant farmers. Jordan chooses not to give voice to Pappy, a decision that builds tension, I think. As a menacing presence, he remains a dark and ominous figure looming over the fates of both families. His innate violence and his vitriolic prejudice set the Mudbound tone. That he is silent metaphorically portends what finally occurs.

Since I’ve never lived in the South, only visited there a time or two, I have no way of judging the realism of Mudbound’s cascading events and ultimate tragedy. I can say, however, that Hillary Jordan has written a gripping novel that lays bare the reckless excesses of Jim Crow behavior and vindictive mob mentality. From a northerner’s vantage point, I was a heartsick reader, dismayed by the illogical inhumanity that happened again and again. Yet I found myself emotionally relating to Laura, a gendered piece of property whose situation was as problematic as Ronsel’s, and cheering her subtle undercuts and domestic manipulations.

I think Mudbound is an important novel, one I highly recommend to southern and northern readers alike. It exposes a historical underbelly of America that should not be forgotten or ignored. – Ann Ronald

Also available by Hillary Jordan: When She Woke; Aftermirth. 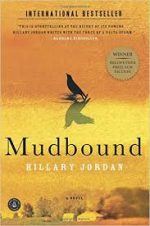 Ann Ronald is a retired English professor from the University of Nevada, Reno. Author of dozens of reviews, she’s also written a number of books about the American West. They include literary studies such as The New West of Edward Abby and Reader of the Purple Sage, cultural studies such as GhostWest and Oh, Give Me a Home, and nature writing such as Earthtones: A Nevada Album. Her latest is a work of fiction, Friendly Fallout 1953. Since retiring, she’s been reading vociferously, so “Bookin’ With Sunny” is giving her a wonderful opportunity to share thoughts about her favorite new discoveries.
More from this reviewer
PrevThe Underground Railroad
High NoonNext