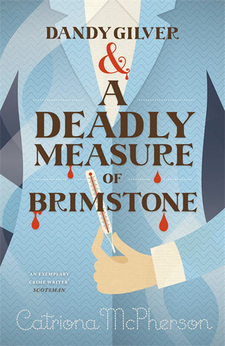 Hoping to introduce myself to an unfamiliar mystery writer, I read three Catriona McPherson novels—A Deadly Measure of Brimstone, Quiet Neighbors, and Scot Free. I chose these because each exemplifies one of the subcategories McPherson has adopted. A Deadly Measure of Brimstone is the eighth of what are now thirteen mysteries featuring Dandy Gilver and her partner Alec Osborne. Quiet Neighbors is a stand-alone mystery, one of more than seven penned by McPherson. And Scot Free is the first in a new series, “A Last Ditch Mystery,” starring Lexy Campbell and her compatriots who reside in the Last Ditch Motel.

Catriona McPherson was born in Scotland, so it is understandable that each of these books features either Scotland or a Scottish heroine, or both. The Dandy Gilver series is a set of period pieces located in Scotland between the two world wars. The first, After the Armistice Ball, takes place in 1918, while the one I read, A Deadly Measure of Brimstone, occurs in 1929, just at the time of the American Stock Market crash. Along with the mysteries involved, McPherson investigates the moneyed Scots, too, probing how they were faring in the years following World War I. Brimstone, for example, takes place in a sulfurous spa where the elite go to embrace good health. One dowager died there, so Dandy and Alec must unearth the Hydropathic Establishment’s multiple layers of intrigue. At the same time, their investments and their lifestyles are in jeopardy, perhaps.

Quiet Neighbors is set in Scotland, too. The anonymous Jude has fled London under mysterious circumstances and is hiding out in a tiny wayside advertised as “Scotland’s Book Town.” There, she takes a temporary job as a cataloguer for Lowland Glen (the name of the bookstore and the name of its proprietor). Notes in old books from a deceased donor suggest that a series of deaths may not have been accidental. When Jude begins to investigate, threats escalate from subtle to verbal to physical. And then, of course, there is the question of Jude’s past. How might it weave itself into the fabric of Wigtown and the Lowland Glen?

Scot Free differs in that McPherson moves a Scottish protagonist to California. From reading her biographical webpage, I see that McPherson, too, is a recent transplant. Lexy Campbell, a family and marriage counselor married to a California dentist, soon realizes that she has made a dreadful mistake. The murder of one of her clients delays Lexy’s post-divorce plans to return to Scotland, so she takes refuge at The Last Ditch Motel. There she is surrounded by a host of eccentric men and women that her social work-self takes to heart. They even help her solve the mystery of her client’s sudden demise.

All three of these novels feature memorable Dickensian characters. McPherson describes the towel-shrouded spa-goers in hilarious terms. Lowland Glen comes straight out of the nineteenth century, although he resides in the twenty-first, while the California motel dwellers are spoofed beyond belief. All three of McPherson’s novels take place in picturable landscapes, too. The Hydropathic Establishment literally smells, Jude lives alongside a cemetery and is conveniently surrounded by gravestones, while the Last Ditch Motel looks exactly like the images its name conjures up. Finally, all three books feature a satiric tone that probes and pulses as the plots develop. To read a McPherson novel is to spend an afternoon with tongue-in-cheek.

Despite their similarities, however, I didn’t like all three narratives equally well. If I were making a recommendation to Catriona McPherson, I would propose ditching the Last Ditch Motel. I think her tone, her sardonic observations, her eye for scenic detail, and especially her characters, fare better in Scotland than in California. Whereas I would readily read another of McPherson’s stand-alone novels and I would happily follow Dandy Gilver from case to case and from year to year, I found Lexy and her friends over the top. A little too frivolous, a little too exaggerated, a little silly. In sum, I discovered a Scottish author that many readers may enjoy. I just wish she wouldn’t stray to a new locale.   –  Ann Ronald 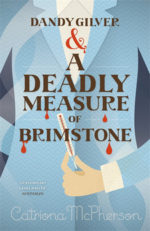 Ann Ronald is a retired English professor from the University of Nevada, Reno. Author of dozens of reviews, she’s also written a number of books about the American West. They include literary studies such as The New West of Edward Abby and Reader of the Purple Sage, cultural studies such as GhostWest and Oh, Give Me a Home, and nature writing such as Earthtones: A Nevada Album. Her latest is a work of fiction, Friendly Fallout 1953. Since retiring, she’s been reading vociferously, so “Bookin’ With Sunny” is giving her a wonderful opportunity to share thoughts about her favorite new discoveries.
More from this reviewer
PrevLouisiana’s Way Home
House. Tree. Person.Next