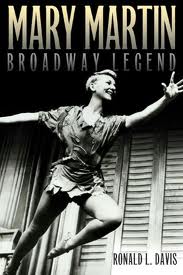 To kids growing up in the 1950’s, the name Mary Martin meant just one thing: Peter Pan. This was a television re-creation of the 1954 Broadway musical. Others may recall Mary Martin on the original cast albums of Rodgers and Hammerstein’s South Pacific and The Sound of Music. But Mary’s career as a singer and actress was far more extensive than most people realize. And she influenced the musical stage to a far greater degree than is generally thought.

Or so we find out in the recent biography Mary Martin Broadway Legend by Ronald L. Davis. The author is a professor emeritus of history at Southern Methodist University. Professor Davis and Mary Martin are not only fellow Texans, but were also good friends during the star’s later years. This benefits the biography which grew out of many hours of oral history which Davis managed to record before Martin’s death at 76 in 1990.

Mary Martin also clears up some questions about her career. For one thing, she was not a success in the movies. Her film career was limited to three short years under contract to Paramount in the early 1940’s. Few of these nine films are in any way memorable. Returning to New York, she nearly missed the boat there. Given two choices, she turned down Away We Go, concerned that the composer and lyricist had not worked together before. Mary chose Dancing in the Streets which closed out of town. The title of Away We Go was changed to Oklahoma. The songs were written by Richard Rodgers and Oscar Hammerstein II in their first collaboration.

Later Martin toured in the road company of Irving Berlin’s Annie Get Your Gun. And even though the role is not associated with her, over a thousand performances did much to solidify her reputation. Her next big hit was South Pacific. She stayed with that show for over two years and hundreds of performances.

Rodgers and Hammerstein consulted with her about their next production, and although she turned down the female lead, she suggested a young television director she had previously worked with for the male lead. His name was Yul Brynner and the show was The King and I. Similarly, Martin passed on My Fair Lady sensing she wouldn’t be a convincing cockney. This provided an opportunity for the young Julie Andrews.

Mary Martin’s personal life remains something of a mystery. It seems she was always working too hard to have one. A teenage pregnancy and marriage produced a son, the well-known TV actor Larry Hagman. Hagman was interviewed for this book. He died in 2012 at the age of 81. Martin had a more successful second marriage to Richard Halliday who gave up his own career to manage hers. Halliday was an alcoholic, possibly gay, and was far from well-liked in the theatre world. Nonetheless, Mary and Richard remained utterly devoted to each other from the 1940’s until his death in 1973.

Author Davis has written books about John Wayne, Linda Darnell, and director John Ford. This book does an excellent job evoking the postwar period when melodies from Broadway were well known and loved by everyone. One of the joys of reading Mary Martin is you can almost hear all the terrific songs from the greatest period in American musical theatre. Who can forget My Heart Belongs to Daddy, A Wonderful Guy, and even Do-Re-Mi? One only regrets Mary never worked with Stephen Sondheim or Andrew Lloyd Webber.

Davis clearly has an affinity for his subject and lays out Mary Martin’s life and career with great enthusiasm. His biography is exceptionally well written and valuable. And for all the children who watched “Peter Pan” on television and never grew up, the show was taped and still exists in watchable condition. Mary Martin flies again!      – Dan Erwine

Dan Erwine holds a BS in Telecommunications, San Diego State University. Dan recently retired after four decades in radio broadcasting. His background San Diego stations KFSD and NPR's KPBS, and KUNR, Reno, NV. Over the years, Dan has produced and hosted a number of talk shows and interviewed over five thousand writers in almost every genre and career, from such notables as David Brin to Seamus Heaney, Allen Ginsberg, Judy Collins, Charlton Heston and Wally Schirra. Dan is a comic book aficionado and has a special interest in film, science fiction and mystery. He lives with his wife in Reno, NV.
More from this reviewer
PrevA Strong West Wind and Fire Season
Pope JoanNext