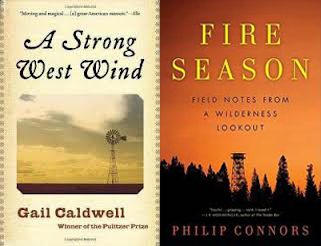 A Strong West Wind and Fire Season: Field Notes from a Wilderness Lookout

When I go on an extended road trip, I always carry along a couple of books that describe the landscape both literally and imaginatively. Last month, as I drove leisurely across the open spaces of New Mexico and then wandered down the spine of the dusty Texas Panhandle, I chose two quite different place-based memoirs to read along the way. Gail Caldwell’s A Strong West Wind recalls her Amarillo girlhood, her early college years in Lubbock, and then her escape to the intellectual freedom of Austin in the 1960s. Philip Connors’ Fire Season recounts a narrower range of experiences, detailing eight years as a fire lookout in the Land of Enchantment’s Gila Wilderness. At first glance, you might wonder why I’m writing about two such widely divergent books, but each well demonstrates how a person may be shaped by his or her surroundings.

Connors comes to his lookout after trying a journalistic stint in New York City and after testing out other careers. He finds his niche in New Mexico, where the land and the isolation of a fire tower suit his personality. Time to read, time to write, time to contemplate the distances in every direction. “The landscape moves through moods all day, morning haze in the valleys, every hollow and river course darkened in shade and swaddled by smoke. Come afternoon, the topographic variations flatten in the absence of shadow. The scene outside my windows leaches of contrast. A searing sun scalds the desert. The cloudless sky seems to open like the lid of a vault, blue to infinity. The job becomes an exercise in just how much watching I can stand. I’ve yet to find the limit.” Like Connors, I too love watching the land unfold, so his words suited my driving days as I crossed New Mexico first from west to east and then again from east to west.

In contrast to Connors’ embrace of his surroundings, Caldwell feels like an alien [as I feel whenever I’m in Texas], an outsider as a girl, an adult who must come to terms with the scenes of her childhood. “I know now that the angular wheat fields and blank vistas and eerie, lonesome sounds of the Panhandle shaped me as utterly as water informs rock. So mine is a story that begins with the fragments of dreams on the most desolate of plains, where a child came of age listening to the keening of dust storms drown out the strains of Protestant hymns. No plagues or locusts here: just that residing, familiar emptiness, and the ensuing aches and consolations of the journey out.” The journey out, away from the Panhandle, is Caldwell’s story, while Connors’ is the journey in.

Both memoirists are readers, as interiorly affected by books and words as they are by the exterior scenery outside their windows. To read their observations, their digressions, their musings about language and literature, is like browsing the shelves of a large library, pulling down a volume by Aldo Leopold, by Edward Abbey, by William Faulkner, by Sylvia Plath, and by dozens more. Both Caldwell and Connors are thoughtful individuals, too. With smart insights and intellectual tenacity, they probe ideas, divergent philosophies, themselves. I picked their books because of their locales, but in their pages I discovered so much more. Finally, both authors are loners of a sort, and yet relationships are important to each of them. Caldwell, in particular, is working out her interactions with her father, as a child and as an adult. Connors has no such conundrum to puzzle over, but he does describe a marriage that apparently suffers little from long summers spent mostly apart.

It may still seem odd to review A Strong West Wind and Fire Season in a single post, but I want to underscore what I wrote at the outset. Reading books set in a particular locale while travelling through that locale is a fine way to learn about the nuances of place. That both of these memoirs contain so much more was just a bonus.

P.S. I also read two murder mysteries while pausing for a week of gourmet indulgences in Santa Fe. Both Andi Marquette’s Land of Entrapment and Elizabeth Ann Galligan’s Secrets of the Plumed Saint are set in New Mexico, the former in Albuquerque and the latter in Chimayo [though Galligan doesn’t call the town by that name]. As do Caldwell and Connors, these two authors capture a strong sense of place in their writing, bringing local atmosphere to life. Fun to read while on the road!  -A.R.

Ann Ronald is a retired English professor from the University of Nevada, Reno. Author of dozens of reviews, she’s also written a number of books about the American West. They include literary studies such as The New West of Edward Abby and Reader of the Purple Sage, cultural studies such as GhostWest and Oh, Give Me a Home, and nature writing such as Earthtones: A Nevada Album. Her latest is a work of fiction, Friendly Fallout 1953. Since retiring, she’s been reading vociferously, so “Bookin’ With Sunny” is giving her a wonderful opportunity to share thoughts about her favorite new discoveries.
More from this reviewer
PrevThe Dog Stars
Mary Martin Broadway LegendNext