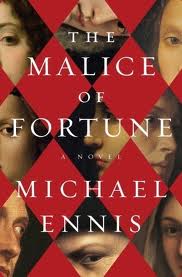 I think Michael Ennis is in love with Italy. Not the Italy of today’s grand sweep from the Alps down to the tip of the boot pointing to Sicily, but the fragmented and up-for-grabs Italy of the Renaissance. If a time machine is ever invented, I’m signing up to take the Grand Tour of Renaissance Italy with Michael Ennis as my tour guide.

Malice of Fortune has just about everything a fan of serious historical fiction could ask for – and for the uninitiated, what a great place to begin. One does not just read about Renaissance Italy in Ennis’ book, one experiences Renaissance Italy, as in this description of the residence of Damiata, the pope’s mistress and Machiavelli’s love interest: “Our rooms were on the ground floor of an ancient brick house off a narrow, muddy alley, with little shops and houses crowding in on every side, their balconies and galleries so close overhead that we always seemed to go out into the night, even at noon.” The reader has now acquired a postcard to send home.

Malice of Fortune brings together a young Leonardo da Vinci with his penchant for dissection, a young Niccolò Machiavelli as an emissary from Florence, and Damiata, better known as “the Pope’s whore.” Pope Alexander VI’s (Rodrigo Borgia) search for the killer of his youngest son is the historical basis for this labyrinthine thriller. The search for the assassin becomes embroiled in power-grabbing political espionage, military strategy, and a series of random murders by a killer who leaves the body parts of his female victims in much the same way as Hansel and Gretel left bread crumbs.

Da Vinci attempts to solve the mystery by studying the retrieved body parts as well as using his mastery of mathematics and drafting to devise a map of the multiple crime scenes in Romagna, while Machiavelli’s method is to look into the mind to find out what sort of man would commit such murders. The story begins in the voice of Damiata, a learned woman of great beauty who is herself suspected of killing the pope’s son, who is also the father of her own young son. But it is Machiavelli’s voice that holds forth the longest and to me was the most intriguing. It is not only that the methods used by both men bring us to what is clearly the earliest beginnings of forensic science, but Machiavelli’s notes, letters and journals concerning these events are the very core of his seminal work, The Prince.  It is a rare talent for an author to write one book (Malice of Fortune), composed of facts that may be unfamiliar to today’s readers, only to find that it’s those very facts which gave shape and substance to another book (The Prince), which we’ve all known for hundreds of years,

This is not a novel for the fainthearted, but for those of us who like to be pointed in new directions, Ennis is a master. It took only two days after reading Malice of Fortune to pick up a copy of The Prince. Ennis’ Machiavelli is nothing like the man I had learned about in school. His life was both creative and tragic as seen in his words written to Lorenzo dé Medici when presenting The Prince: “So, Your Magnificence, take this little gift in the spirit in which I send it; . . . And if, from your lofty peak, Your Magnificence will sometimes glance down to these low-lying regions, you will realize the extent to which, undeservedly, I have to endure the great and unremitting malice of fortune.”   -s.s.

Sunny Solomon holds an MA in English/Creative Writing, San Francisco State University. She is a book reviewer for “The Clayton Pioneer” and her poetry and other writing has been published in literary journals, one chapbook, In the Company of Hope and the collection, Six Poets Sixty-six Poems. She was the happy manager of Bonanza Books, Clayton, CA and Clayton Books, Clayton, CA. She continues to moderate a thriving book club that survived the closure of the store from which it began. Sunny currently lives next to the Truckee in Reno, NV.
More from this reviewer
PrevMiss Fuller
Blackout and All ClearNext