Blackout and All Clear 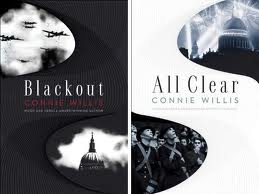 Connie Willis is one of the leading figures in science-fiction today. Her recent time-travel novels Blackout and All Clear (2010) won both the Hugo and Nebula awards, the most prestigious honors in the field. And her Christmas stories published in Asimov’s Science Fiction have achieved the status of timeless classics. This year, Willis was named Grand Master by the Science-Fiction and Fantasy Writers of America. She joins a short list of luminaries including Isaac Asimov, Robert A. Heinlein, Arthur C. Clarke, and Ray Bradbury.

Blackout and All Clear are really a single novel totaling almost 1200 pages. They represent the culmination of 30 years of stories and novels all with the same premise, starting with Firewatch (1982). A group of mid-21st century Oxford scholars discover how to manipulate the space-time continuum. They use their knowledge to travel back in time to London in 1940 where they observe the blitz in progress and attempt to prevent the destruction of St. Paul’s cathedral by firebombing.

While the scholars attempt to correct historical incongruities, they run the risk of making alterations that have unpleasant implications for the future. The 1992 novel Doomsday Book has the scholars visit the plague-ridden 14th century. In To Say Nothing of the Dog (1998), Willis revisits the period of the blitz. But this time the tone is comical. The time travelers interact with local characters but rarely encounter real historical personages.

Willis is meticulous in her attention to historical detail and is clearly in love with all things English. Nevertheless, she is as American as apple pie and a longtime resident of Greeley, Colorado. In Blackout and All Clear, the Oxford scholars return to bounce around wartime England in 1940 and 1941. They struggle to improve outcomes, all the while simply trying to survive. There are visits to later years of the war as well. Here the consequences of earlier interventions are seen to play out.

This huge and complicated story took Willis almost a decade to write. The massive volumes of Blackout and All Clear are thrillingly written and a particular treat for both Anglophiles and history buffs. One caution: Willis jumps right into the action without much explanation of the space-time continuum and how it works. A safe recommendation would be to read To Say Nothing of the Dog (still her most enjoyable book) before tackling the two-volume set.

Willis has not gone on record whether she has completed her love affair with England during World War II. While many readers are delighted with the series, others have reservations. Fellow science-fiction writer Susan Palwick says that Willis is in a rut. But one more visit to Coventry as portrayed in “To Say Nothing of the Dog” would be fine with me.

Connie Willis has won 11 Hugos and 7 Nebula awards for her writing. In May of 2012, she was given the Damon Knight Memorial Grand Master Award.  Since 1975, this honor has been given every year or so to living writers . Most of the 28 recipients have been men, a trend that is slowly starting to change. The only previous women honorees are Andre Norton (1984), Ursula K. le Guin (2003), and Anne McCaffrey (2005).

Women have always written science-fiction. A few names include Leigh Brackett, C.L. Moore, and Alice Sheldon (writing as James Tiptree, Jr.). Connie Willis does not write “hard” or “nuts and bolts” science-fiction enjoyed by physicists of every gender, but she gives her readers an exciting ride through the sometimes terrifying sweep of history. Despite scenes of constant war and conflict in her time travel stories, Connie Willis’ characters are just as likely to be dealing with absurdly humorous situations.

Dan Erwine holds a BS in Telecommunications, San Diego State University. Dan recently retired after four decades in radio broadcasting. His background San Diego stations KFSD and NPR's KPBS, and KUNR, Reno, NV. Over the years, Dan has produced and hosted a number of talk shows and interviewed over five thousand writers in almost every genre and career, from such notables as David Brin to Seamus Heaney, Allen Ginsberg, Judy Collins, Charlton Heston and Wally Schirra. Dan is a comic book aficionado and has a special interest in film, science fiction and mystery. He lives with his wife in Reno, NV.
More from this reviewer
PrevMalice of Fortune
Eyes, StonesNext